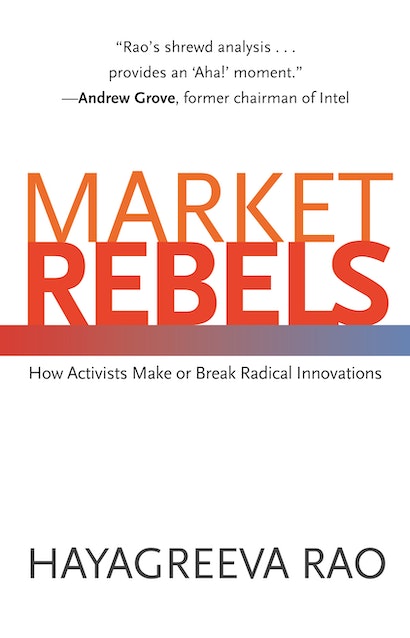 Great individuals are assumed to cause the success of radical innovations — thus Henry Ford is depicted as the one who established the automobile industry in America. Hayagreeva Rao tells a different story, one that will change the way you think about markets forever. He explains how “market rebels” — activists who defy authority and convention — are the real force behind the success or failure of radical innovations.


Rao shows how automobile enthusiasts were the ones who established the new automobile industry by staging highly publicized reliability races and lobbying governments to enact licensing laws. Ford exploited the popularity of the car by using new mass-production technologies.


Rao argues that market rebels also establish new niches and new cultural styles. If it were not for craft brewers who crusaded against “industrial beer” and proliferated brewpubs, there would be no specialty beers in America. But for nouvelle cuisine activists who broke the stranglehold of Escoffier’s classical cuisine in France, there would have been little hybridization and experimentation in modern cooking.


Read Market Rebels to learn how activists succeed when they construct “hot causes” that arouse intense emotions, and exploit “cool mobilization” — unconventional techniques that engage audiences in collective action. You will realize how the hands that move markets are the joined hands of market rebels.

Hayagreeva Rao is the Atholl McBean Professor of Organizational Behavior and Human Resources at Stanford University's Graduate School of Business.

"Market Rebels uses the grassroots movement that led to the widespread acceptance of the motor car as the starting point for a series of brief case studies that look at 'how activists make or break radical innovations.'"—Jonathan Birchall, Financial Times

"Rao highlights social movements as underappreciated factors in the market successes of so-called 'radical innovations.' Through well-crafted, intriguing case studies that include the rise of automobiles, microbrewing, nouvelle cuisine, and personal computers, he shows how mobilized activists influence the acceptance of innovations, be they technological, cultural, or structural. . . . Rao's scholarly publications, related to his experience as an organizational sociologist, provide the foundation for this lively, highly accessible volume, which he explicitly directs to the broad public and especially to businesspeople seeking to advance their own innovations."—Choice

"In this volume, Hayagreeva Roa, the Atholl McBean professor of organizational behaviour and human resources at Stanford University's graduate school of business, provides a perspective on the evolution of markets that is largely absent from traditional economic and business literature."—Micheal J. Kelly, Ottawa Business Journal

"The narrative of economic growth is always one of challenges to established interests, In this sense, Rao's book appears at just the right time, when questions about whether and how to bail out entrenched interests—carmakers, financial conglomerates—are persistent."—Carl Schramm, Stanford Social Innovation Review

"[Rao] does provide an insight that should be valuable for both economic and business historians. . . . [His] points . . . deserve to be taken seriously by economic historians as well as by sociologists."—Paul L. Robertson, Australian Economic History Review

"Market Rebels is the best book ever written about why new ideas do or don't spread throughout the marketplace. Rao provides a subtle, satisfying, and original interdisciplinary brew of concepts, and carries the reader along with compelling examples. He shows how a company's success depends on its ability to work effectively with groups that many leaders deem to be irrelevant or even destructive to their organizations. This accessible masterpiece will become a classic."—Robert I. Sutton, coauthor of Hard Facts, Dangerous Half-Truths, and Total Nonsense

"Rao's shrewd analysis of the role of social movements in energizing the growth of 'disruptive technologies' provides an 'Aha!' moment. Could his 'market rebels' lead the way out of the morass of conflicting and ill-thought-out reactions to our energy and environmental crises?"—Andrew Grove, former chairman of Intel

"Market Rebels is chock full of powerful insights—and powerful tools—for understanding and affecting markets. It's very useful for me today to understand my own projects, and will be increasingly useful in the hypernetworked environment of the Internet in the twenty-first century."—John Lilly, chief executive officer of Mozilla Corporation

"Market Rebels offers a new language and framework for viewing changes in market beliefs, behavior, and innovations. If you represent a company, industry, or activist group wanting to change beliefs and behavior, to promote or oppose a market innovation, read this book."—Philip Kotler, author of Kotler on Marketing: How to Create, Win, and Dominate Markets

"Market Rebels induces a conversation between the social-movement research and organization studies that will ignite decades of productive discussion and research in both fields. Drawing on a wide range of entertainingly relevant cases from the automobile to French cuisine, the author demonstrates the many ways social movements bump up against economics markets—sometimes building new markets, sometimes impeding their construction, and usually forcing crises that spur innovation above that promulgated by the market itself."—Paul DiMaggio, Princeton University

"This is an insightful and compelling book. Social movements are often seen as only representing marginalized actors, but as Rao shows, they are a much more encompassing phenomenon and are essential for understanding business, markets, and society more generally."—Christopher Marquis, Harvard Business School

"I truly enjoyed reading Market Rebels and I think others will too. I gained valuable understanding about the evolution of different industries, as well as how collective actions shape the evolution of the markets. I learned a lot from this book."—Boris Groysberg, Harvard Business School