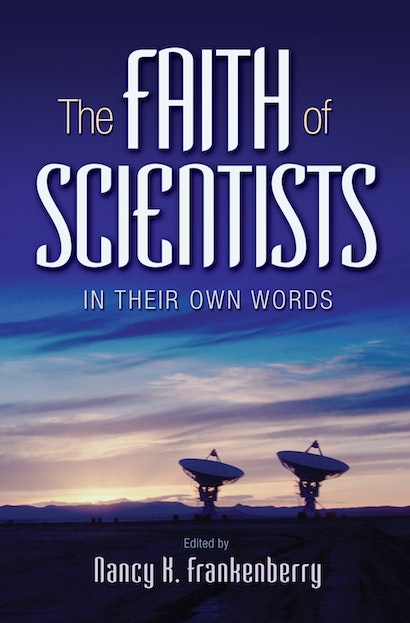 The Faith of Scientists is an anthology of writings by twenty-one legendary scientists, from the dawn of the Scientific Revolution to the frontiers of science today, about their faith, their views about God, and the place religion holds — or doesn’t — in their lives in light of their commitment to science. This is the first book to bring together so many world-renowned figures of Western science and present them in their own words, offering an intimate window into their private and public reflections on science and faith.


Leading religion scholar Nancy Frankenberry draws from diaries, personal letters, speeches, essays, and interviews, and reveals that the faith of scientists can take many different forms, whether religious or secular, supernatural or naturalistic, conventional or unorthodox. These eloquent writings reflect a spectrum of views from diverse areas of scientific inquiry. Represented here are some of the most influential and colossal personalities in the history of science, from the founders of science such as Galileo, Johannes Kepler, Francis Bacon, Isaac Newton, Charles Darwin, and Albert Einstein, to modern-day scientists like Carl Sagan, Stephen Jay Gould, Jane Goodall, Freeman Dyson, Stephen Hawking, Edward O. Wilson, and Ursula Goodenough. Frankenberry provides a general introduction as well as concise introductions to each chapter that place these writings in context and suggest further reading from the latest scholarship.


As surprising as it is illuminating and inspiring, The Faith of Scientists is indispensable for students, scholars, and anyone seeking to immerse themselves in important questions about God, the universe, and science.

Nancy K. Frankenberry is the John Phillips Professor of Religion at Dartmouth College. Her books include Radical Interpretation in Religion and Religion and Radical Empiricism.

"[T]his is one classroom anthology that will hold wider appeal to general readers. . . . [F]rankenberry's new collection is very different and broader in scope."—Library Journal

"[A] valuable collection of source materials for your own quest for knowledge. Equally rewarding is Frankenberry's juxtaposition of scientists with differing views."—Christopher Fenoglio, National Catholic Reporter

"I suggest reading Nancy Frankenberry's anthology of writings by 21 notable scientists from the 16th century to the present. The selections center on faith, their views about God and the place religion holds—or does not hold—in their lives in light of their commitment to science. Drawn from their own words in many primary sources, the essays show a spectrum of views from many areas of scientific inquiry."—Mark M. Wilkins, St. Anthony Messenger

"The Faith of Scientists presents a series of excerpts from researchers' own writings on the subject, accompanied by short biographical sketches from editor Nancy Frankenberry, a religion scholar at Dartmouth College in the US. The resulting collection spans the period from Galileo Galilei to Stephen Hawking and encompasses both devout believers like Freeman Dyson and ardent atheists like Richard Dawkins."—Physics World

"This is the first book to bring together so many world-renowned figures of Western science and present them in their own words, offering an intimate window into their private and public reflections on science and faith."—Spartacus Educational Review

"This book raises important issues. . . . I would recommend this book for the explorer in all of us-whether we think we've found what we're looking for, or are still searching."—Patrick Chan, CASE Magazine

"As an introductory text that offers a fair and accurate treatment of the roles and non-roles of faith for important scientists, one would be hard pressed to do better."—Jason Robinson, European Legacy

"Nancy Frankenberry provides a rare glimpse into the interior lives of scientists as they talk about their faith, their views about God, and spirituality. From Galileo to Ursula Goodenough, she shows critical acumen in selecting the source material and authoritative scholarship in interpreting it. This book offers an unsurpassed treatment of a vital subject."—Max Jammer, author of Einstein and Religion

"Frankenberry has given us a great gift, a groundbreaking collection of writings by preeminent scientists, past and present, on religion and its relation to mathematics and science. The breadth of sources dazzles as does the range of views, from Pascal's Catholicism to Goodenough's religious naturalism. One emerges from this heady mix with the firm conviction, as Einstein puts it, that 'science without religion is lame; religion without science is blind.' This is a magnificent achievement, one of the most important books of the year."—Philip Zaleski, editor of The Best American Spiritual Writing series

"Nancy Frankenberry writes lucidly on the long interplay between scientific and religious ideas. With the eye of a professional philosopher of religion she has selected a fascinating parade of scientists and has illuminated their views on religion with particularly perceptive analyses."—Owen Gingerich, author of God's Universe

"An important contribution to the ongoing dialogue between science and religion. I know of no work that deals with a broader chronological and disciplinary range of scientists than does Frankenberry's collection. This book promises to be useful to general readers and members of the academic community. It constitutes an important addition to the burgeoning library of books on the relationship between science and religion."—Jon H. Roberts, coauthor of Darwinism and the Divine in America