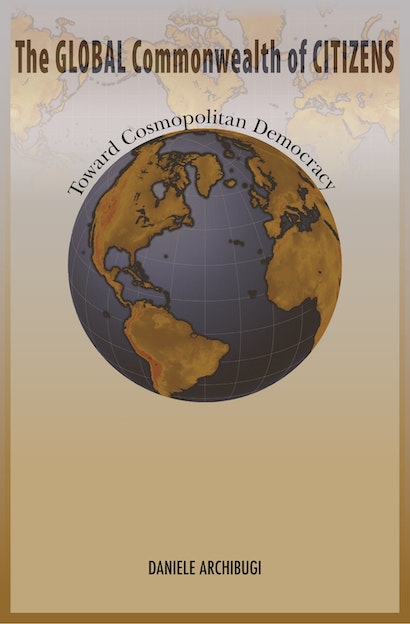 The Global Commonwealth of Citizens critically examines the prospects for cosmopolitan democracy as a viable and humane response to the challenges of globalization. Arising after the collapse of the Soviet Union and the decisive affirmation of Western-style democracy, cosmopolitan democracy envisions a world politics in which democratic participation by citizens is not constrained by national borders, and where democracy spreads through dialogue and incentives, not coercion and war. This is an incisive and thought-provoking book by one of the world’s leading proponents of cosmopolitan democracy.


Daniele Archibugi looks at all aspects of cosmopolitan democracy in theory and practice. Is democracy beyond nation-states feasible? Is it possible to inform global governance with democratic norms and values, and if so, how? Archibugi carefully answers questions like these and forcefully responds to skeptics and critics. He argues that democracy can be extended to the global political arena by strengthening and reforming existing international organizations and creating new ones, and he calls for dramatic changes in the foreign policies of nations to make them compatible with global public interests. Archibugi advocates giving voice to new global players such as social movements, cultural communities, and minorities. He proposes building institutional channels across borders to address common problems, and encourages democratic governance at the local, national, regional, and global levels.

The Global Commonwealth of Citizens is an accessible introduction to the subject that will be of interest to students and scholars in political science, international relations, international law, and human rights.

Daniele Archibugi is professor of innovation, governance, and public policy at the University of London, Birkbeck College, and a research director at the Italian National Research Council in Rome. His books include Debating Cosmopolitics and The Globalizing Learning Economy.

"Archibugi has been a leading proponent of new forms of cosmopolitan political community in which citizens have opportunities to participate directly in making global choices. In this book, he provides a grand summation of a decade of thinking about cosmopolitan democracy. . . . Archibugi's claim that democracy must be reinvented for a global era leads to extended discussions of the ways in which transnational democracy might operate. It is easy for such discussions to become abstract statements of political dreams, but Archibugi, to his credit, rolls up his sleeves and grapples with the specific ways in which citizen groups can get directly involved."—Foreign Affairs

"In applying cosmopolitan logic to concrete issues such as humanitarian intervention, institutional reform at the UN, and democratic transitions, Archibugi has provided an indispensable contribution."—Choice

"This work is a much awaited book length exposition of the project of global democracy from one of its leading proponents and represents the culmination of two decades of reflection on this topic. This shows in the richness, thoughtfulness and depth of the arguments the author puts forward in his contribution to a debate that is fundamental for contemporary politics."—Tiziana Torresi, Global Justice Network

"Archibugi offers a morally appealing vision of cosmopolitan democracy, and thus anyone who has yet to give up on modernity's humanitarian impulses should read this book."—William E. Scheuerman, Perspectives on Politics

"Archibugi outlines his cosmopolitan project in a simple and readable style. Anyone interested in problems of global governance will find the book stimulating and instructive."—Faruk Yalvac, Spectrum

"His erudition and command of the salient literature are evident throughout this work, and he moves with ease through a range of debates about suprastate accountability, while engaging convincingly with numerous possible critiques of cosmopolitan democracy. . . . The Global Commonwealth of Citizens provides not only an exhaustive treatment of the benefits and drawbacks of cosmopolitan democracy but the most detailed statement to date of how some form of cosmopolitandemocracy could be realized."—Luis Cabrera, Ethics & International Affairs

"This engaging book . . . deserves to be read by all who are interested in international institutions and democracy."—Kristian Skrede Gleditsch, Journal of Peace Research

"Archibugi's book . . . should be applauded and paid attention to."—Jack Crittenden, Journal of Politics

"The torch has passed from Kant to Archibugi, and if political theorists had a team of optimists, Archibugi would be one of the captains. But I do not think that that optimism, utopian or otherwise, is anything that needs to be excused or explained away. It should be applauded and paid attention to, as should Archibugi's book."—Jack Crittenden, Journal of Politics

"The Global Commonwealth of Citizens is not a book of dreams. It is a serious, learned, but nevertheless accessible effort to grapple with some of the most important issues of the twenty-first century. Is it possible to be cosmopolitans—citizens of a world of more than six billion people—and to find ways that allow us all to govern ourselves? The debate that this book engages is the debate of our time. Daniele Archibugi has made an important contribution."—Anne-Marie Slaughter, dean of the Woodrow Wilson School of Public and International Affairs at Princeton University

"Daniele Archibugi provides a bold and innovative approach to thinking about democracy within and beyond the borders. At a stroke, he helps consolidate a new political discourse to meet the challenges of our global age. Modern political theory has thought of the political good as limited within the boundaries of nation-states. Archibugi demonstrates why this no longer works, and shows how to move on."—David Held, London School of Economics and Political Science

"This is the first theoretically sophisticated and conceptually innovative effort to build an overall case for the total democratization of political life at all levels of human interaction. This is a truly groundbreaking book that will arouse widespread interest, commentary, and debate about both the desirable approach to global governance and the proper relationship between domestic and foreign policy in liberal democracies."—Richard A. Falk, author of The Declining World Order

"Substantial and important. Archibugi has written a provocative book that imagines an alternative political world to the one we currently inhabit, and he describes and defends this alternative with tremendous verve and imagination. He forces us to rethink some of our assumptions about the possibilities of democracy in a global society. This is a book from which we can all learn."—Glyn Morgan, author of The Idea of a European Superstate

"Daniele Archibugi is one of the world's leading exponents of cosmopolitan democracy, and this book admirably consolidates his own position and provides one of the most systematic and searching statements in the genre. His arguments are thoroughly researched, erudite, engaging, accessible, important, and inspiring."—Jan Aart Scholte, author of Globalization