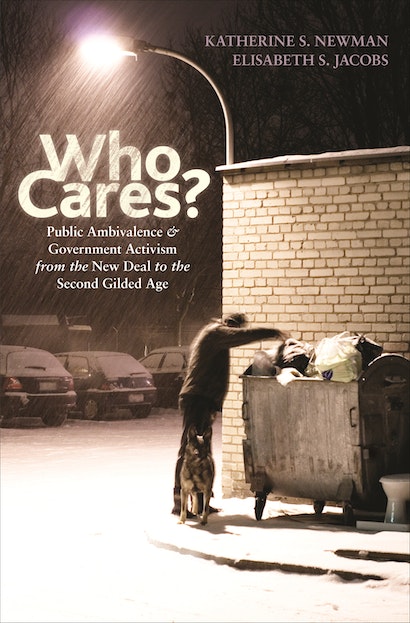 Americans like to think that they look after their own, especially in times of hardship. Particularly for the Great Depression and the Great Society eras, the collective memory is one of solidarity and compassion for the less fortunate. Who Cares? challenges this story by examining opinion polls and letters to presidents from average citizens. This evidence, some of it little known, reveals a much darker, more impatient attitude toward the poor, the unemployed, and the dispossessed during the 1930s and 1960s. Katherine Newman and Elisabeth Jacobs show that some of the social policies that Americans take for granted today suffered from declining public support just a few years after their inception. Yet Americans have been equally unenthusiastic about efforts to dismantle social programs once they are well established. Again contrary to popular belief, conservative Republicans had little public support in the 1980s and 1990s for their efforts to unravel the progressive heritage of the New Deal and the Great Society. Whether creating or rolling back such programs, leaders like Roosevelt, Johnson, Nixon, and Reagan often found themselves working against public opposition, and they left lasting legacies only by persevering despite it.

Timely and surprising, Who Cares? demonstrates not that Americans are callous but that they are frequently ambivalent about public support for the poor. It also suggests that presidential leadership requires bold action, regardless of opinion polls.

Katherine S. Newman is the Malcolm Forbes, Class of 1941, Professor of Sociology and Public Affairs at Princeton University. Her many books include The Missing Class: Portraits of the Near Poor in America (with Victor Tan Chen) and No Shame in My Game: The Working Poor in the Inner City. Elisabeth S. Jacobs is a senior policy adviser to the Joint Economic Committee of the U.S. Congress

"All who are interested in US public opinion concerning the role of government in support of social programs and the role that leaders can play in supporting or dismantling such programs should read this brief, timely, and well-written gem."—Choice

"The authors raise important questions about public opinion, policy making, and democracy. Scholars exploring shifts in the American safety net and American politics more generally will have to attend to the authors' arguments and their careful synthesis of public opinion data. Lay audiences and policy makers will find a useful and provocative, though quite general, overview of welfare state development alongside a passionate call for progressive political leadership to address the economic inequality and insecurity of the 'second gilded age.'"—Marisa Chappell, Journal of American History

"Who Cares? makes a contribution by providing a concise history of the interplay between the development of antipoverty policy initiatives and public opinion since the New Deal and by demonstrating consistent themes in attitudes toward the welfare state."—Tracy Roof, Perspectives on Politics

"Americans have long been ambivalent about what is owed the weakest and most vulnerable among us, and public opinion has never been overly generous toward the welfare state. Not everyone is a snarling Scrooge with a heart of stone, but neither does everyone believe we are our brother's keeper—not by a long shot. So what's a President to do in the face of great human need and a divided, indifferent, or even hostile public mind? The answer, in one word, is: Lead. Katherine Newman and Elisabeth Jacobs have produced a timely and absorbing book about how Franklin Roosevelt, Lyndon Johnson, and—yes—Richard Nixon refused to leave the fate of public policy toward the poor to a fickle public. Barack Obama, are you listening?"—Bill Moyers

"The deep ambivalence Americans feel about government has always been central to our politics, and it's an especially vital matter now with the rise of Tea Party movements and other assaults on public power. Americans often want a smaller government that does more, a difficult recipe for politicians to follow. That's why Who Cares? is so timely and so important. Katherine Newman and Elisabeth Jacobs have done a superb job tracing the history of our ambivalence and suggesting where we might go from here. They will be the talk of academia—and the talk shows."—E. J. Dionne Jr., author of Souled Out and Why Americans Hate Politics

"This timely and important book shows that Americans are willing to support social programs that help the poor and unfortunate—but usually only after those programs have been up and rolling for years. A just society therefore depends on politicians with the courage to lead rather than pander to current public opinion."—Robert B. Reich, professor of public policy, University of California, Berkeley