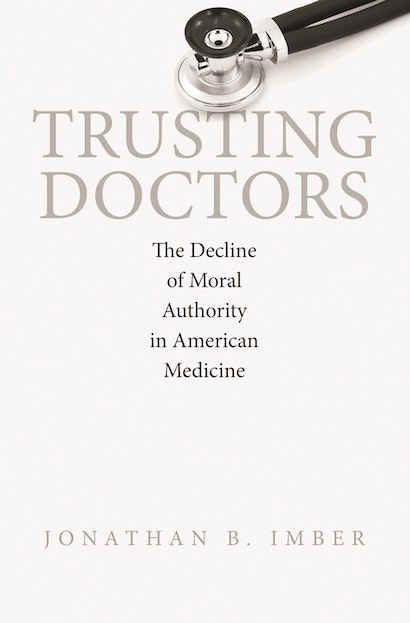 For more than a century, the American medical profession insisted that doctors be rigorously trained in medical science and dedicated to professional ethics. Patients revered their doctors as representatives of a sacred vocation. Do we still trust doctors with the same conviction? In Trusting Doctors, Jonathan Imber attributes the development of patients’ faith in doctors to the inspiration and influence of Protestant and Catholic clergymen during the nineteenth and early twentieth centuries. He explains that as the influence of clergymen waned, and as reliance on medical technology increased, patients’ trust in doctors steadily declined.

Trusting Doctors discusses the emphasis that Protestant clergymen placed on the physician’s vocation; the focus that Catholic moralists put on specific dilemmas faced in daily medical practice; and the loss of unchallenged authority experienced by doctors after World War II, when practitioners became valued for their technical competence rather than their personal integrity. Imber shows how the clergy gradually lost their impact in defining the physician’s moral character, and how vocal critics of medicine contributed to a decline in patient confidence. The author argues that as modern medicine becomes defined by specialization, rapid medical advance, profit-driven industry, and ever more anxious patients, the future for a renewed trust in doctors will be confronted by even greater challenges.

Trusting Doctors provides valuable insights into the religious underpinnings of the doctor-patient relationship and raises critical questions about the ultimate place of the medical profession in American life and culture.

Jonathan B. Imber is the Class of 1949 Professor in Ethics and professor of sociology at Wellesley College. He is the author of Abortion and the Private Practice of Medicine.

"Imber offers a well-researched, insightful work on the role of trust in American medicine, and how social changes altered both doctors' and patients' understanding of the role of the physician from the late 19th century to the present. Imber's relentless focus on the issue of trust differentiates his work from other histories of medicine and doctoring in America. . . . Overall, this is an important book on medicine, doctor-patient relationships, and the historical progress of medical ethics."—A.W. Klink, Choice

"Trusting Doctors can strongly be recommended as a reference text for all teachers in the sociology and bio ethical fields and should be referred to by those who determine and regularly change the content of Medical School teaching."—Sam Mellick, CBE, Supreme Court Library Review of Books

"Imber offers a thought-provoking entry into the history of bioethics, a history which continues to unfold."—Susan E. Lederer, Social History of Medicine

"Imber is at his best . . . when he presents his views on religion and the origins of American medical professionalism. With erudition, he draws on archival material drawn from the writings and preaching of American clergy in the 19th and early 20th centuries."—Joseph J. Fins, Journal of the American Medical Association

"Trusting Doctors is an original and important analysis of the decline of doctors' moral authority and a subtle, sociologically informed critique of contemporary medical bioethics."—Robert Zussman, American Journal of Sociology

"I learned a great deal from reading this book. . . . The book is exceedingly well documented, the notes are very illuminating, and I've already bought or downloaded a number of Imber's sources for further reading. Anyone interested in medical ethics, medical sociology, or the history of medicine will find this book a very worthwhile read."—Daniel P. Sulmasy, New Atlantis

"Jonathan Imber's Trusting Doctors is an important, interesting, and readable book. We all know that our modern doctors do not have the social aura they once did. Imber effectively tells us the eye-opening story of why that change has happened."—Daniel Callahan, cofounder of the Hastings Center

"Doctors and people who have no choice but to trust doctors—which means all of us—need to read this book. With both sympathy and uncompromising honesty, Jonathan Imber traces the frequently troubled history of a medical profession that needs to attend to its increasingly fragile moral authority."—Richard John Neuhaus, editor in chief of the journal First Things

"Trusting Doctors is a major book, a benchmark on medical morality and trust, and an exemplar of religion's impact on medicine."—Peter Conrad, Brandeis University

"This important book challenges many ideas that have long been taken for granted in medical sociology and the history of medicine: ideas about the work of bioethics and epidemiology, as well as the relation between religion and medicine."—Raymond G. De Vries, University of Michigan