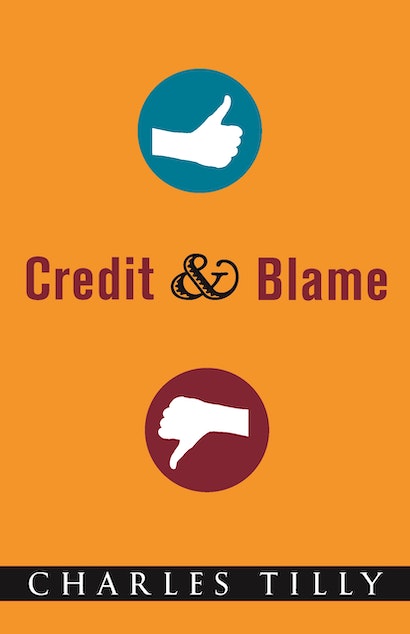 In his eye-opening book Why?, world-renowned social scientist Charles Tilly exposed some startling truths about the excuses people make and the reasons they give. Now he’s back with further explorations into the complexities of human relationships, this time examining what’s really going on when we assign credit or cast blame.


Everybody does it, but few understand the hidden motivations behind it. With his customary wit and dazzling insight, Tilly takes a lively and thought-provoking look at the ways people fault and applaud each other and themselves. The stories he gathers in Credit and Blame range from the everyday to the altogether unexpected, from the revealingly personal to the insightfully humorous — whether it’s the gushing acceptance speech of an Academy Award winner or testimony before a congressional panel, accusations hurled in a lover’s quarrel or those traded by nations in a post-9/11 crisis, or a job promotion or the Nobel Prize. Drawing examples from literature, history, pop culture, and much more, Tilly argues that people seek not only understanding through credit and blame, but also justice. The punishment must fit the crime, accomplishments should be rewarded, and the guilty parties must always get their just deserts.


Brilliantly conceived and masterfully written, Credit and Blame is a book that revolutionizes our understanding of the compliments we pay and the accusations we make.

Charles Tilly (1929-2008) was the Joseph L. Buttenwieser Professor of Social Science at Columbia University. His books include Why? (Princeton) and Democracy.

"Throughout his 50-book career, Tilly liked to squint hard at social life and find simple patterns. [In Credit and Blame] his undogmatic schematizing could reshape our judgments about what might have been obvious to begin with."—Alexander Star, New York Times Book Review

"Drawing upon sources as disparate as Dostoyevski, Darwin, water-cooler conversations and truth commissions, Tilly illustrated how assigning credit and blame stems from and redefines 'relations between the creditor and the credited, the blamer, and the blamed.' Tilly astutely analyzes how people accept credit and society assesses blame, and the commonalities between the two. With its most vivid examples drawn from the author's own life, this book is simultaneously highbrow and humble and a close analysis of social interaction."—Publishers Weekly

"In this book Charles Tilly brilliantly continues his mission of demonstrating how relational sociology can reveal the elemental principles underlying the complexity of human social life. This book demonstrates why Tilly will be known as the founding father of twenty-first century sociology. With his trademark clarity of exposition and synthesis, he lays bare the simple central mechanisms of social interaction."—Adam Ashforth, author of Witchcraft, Violence, and Democracy in South Africa

"An utterly charming and systematically insightful book about pervasive processes in everyday life, and an amazing romp from Raskolnikov to Sacré Coeur—by way of Jack Welch, witchcraft, the Ford Explorer, Bolivian festivals, the Academy Awards, the Nobel Prize, Philip Roth's Everyman, sex discrimination at Wal-Mart, The Mikado, and more. I had not thought about credit and blame in the least bit systematic way before reading this book."—Lynn Eden, author of Whole World on Fire