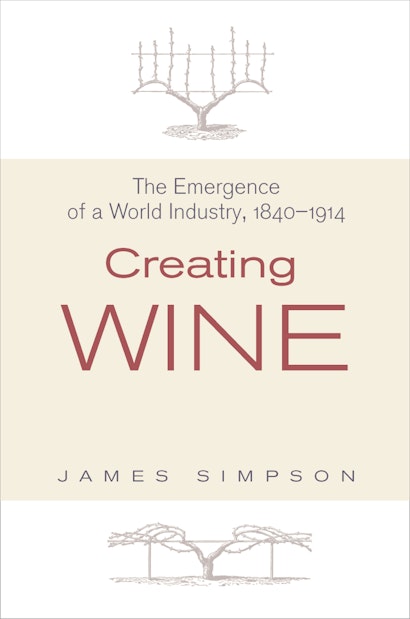 Today’s wine industry is characterized by regional differences not only in the wines themselves but also in the business models by which these wines are produced, marketed, and distributed. In Old World countries such as France, Spain, and Italy, small family vineyards and cooperative wineries abound. In New World regions like the United States and Australia, the industry is dominated by a handful of very large producers. This is the first book to trace the economic and historical forces that gave rise to very distinctive regional approaches to creating wine.


James Simpson shows how the wine industry was transformed in the decades leading up to the First World War. Population growth, rising wages, and the railways all contributed to soaring European consumption even as many vineyards were decimated by the vine disease phylloxera. At the same time, new technologies led to a major shift in production away from Europe’s traditional winemaking regions. Small family producers in Europe developed institutions such as regional appellations and cooperatives to protect their commercial interests as large integrated companies built new markets in America and elsewhere. Simpson examines how Old and New World producers employed diverging strategies to adapt to the changing global wine industry.

James Simpson is professor of economic history and institutions at the Carlos III University of Madrid. He is the author of Spanish Agriculture: The Long Siesta, 1765-1965.

"[T]his book . . . has a decidedly, and fittingly, scholarly tone. . . . There are some fascinating historical facts, including the widespread nature of fraud in the wine business."—Lettie Teague, Wall Street Journal

"Anyone interested in the economic history of wine and drink should read this book."—Tyler Cowen, Marginal Revolution

"[T]here can be no doubt that wine buffs whose interest in what they drink stretches rather further than the supermarket price and the colour of the stuff in the bottle (why read the label?) will find this book fascinating."—Books4Spain.com

"In writing Creating Wine, James Simpson has done a great service to those who are interested in how a traditional industry inherited the modern, highly regulated, market structure we observe in places like France today. The book is important and carefully written. Anyone interested in wine or the interaction between markets and modern democratic states should buy it."—EH.Net Reviews

"Given Simpson's excellent job in describing the evolution of the industry, this book should find a large audience."—Choice

"This is a wonderful book for vine professionals, for wine professionals and for students of economic history alike, including for casual students."—Jacques Delacroix, Enterprise & Society

"[This] is the first book to trace the economic and historical forces that gave rise to very distinctive regional approaches to creating wine."—World Book Industry

"Creating Wine was a delight to read. Simpson has chosen to study a pivotal time in wine production, dictated not only by changing market structure but also various supply shocks and societal factors. While many of us may have some idea of the broad issues that existed in the market for wine around this time, Simpson has provided a thoroughly researched, comprehensive piece of work that will satisfy anyone from novice to expert."—Tim Davis, Australian Journal of Agricultural and Resource

"Creating Wine draws on richly diverse primary sources from the New and Old World to explain how modern wine came into being during the first period of globalization in the late nineteenth and early twentieth centuries. Deftly written and immensely entertaining, it is hard to put down and is a must-read for anyone interested in the history or economics of wine and food. Bravo!"—James T. Lapsley, author of Bottled Poetry: Napa Winemaking from Prohibition to the Modern Era

"Conventional wine histories typically give us the château, the region, or the country. Simpson's ambitious work instead puts at the center and in global perspective the wine sector as a whole. This viewpoint provides valuable insight into struggles over the commoditization of wine, tensions within commodity chains, the challenge to the Old World of the New, and battles between brand, terroir, and varietal. The result is a refreshingly new and engrossing modern history of a global trade."—Paul Duguid, University of California, Berkeley

"Simpson fills a void in wine economics. We learn about environmental issues, overproduction, export crises, institutional responses, the eternal competition with beer, and the rise of wine production in the New World. All of this happened two hundred years ago, but the issues have not changed. This book has a lot to say and one learns a lot. A must-read for economists, historians, politicians, and wine lovers alike."—Karl Storchmann, New York University and Journal of Wine Economics

"This book tells the fascinating story of the transformation of wine from a cheap table drink for Europeans into a highly diversified, quasi-luxury good for consumers all over the world. Simpson maps the worldwide expansion of wine production and describes in lively but rigorous style the challenges that producers and merchants faced and the different solutions they adopted in Europe and the New World."—Giovanni Federico, author of Feeding the World

"Why is it that the wine industry in the New World is dominated by a small number of wineries whereas in Europe there is no such concentration? This fascinating book not only reveals that this difference was evident more than a century ago, it also explains why, and the reasons are just as relevant today as they were then."—Kym Anderson, Wine Economics Research Centre and University of Adelaide

"This is an impressive work of scholarship that brings together a wide range of material about the transformation and globalization of the wine industry in the late nineteenth and early twentieth centuries. Wine historians, economic historians, and significant segments of the general public will find much of interest."—John V. C. Nye, author of War, Wine, and Taxes: The Political Economy of Anglo-French Trade, 1689-1900

"Creating Wine is a boldly pioneering analysis of the complex process by which such forces as increased trade, rising consumer demand, and frequent economic crisis and disease ruptured the older wine economy and opened the way to a global wine industry in the twentieth century. However excellent, earlier studies in this area do not approach the level of concrete synthesis or analytic coherence this book provides. An impressive achievement."—J. Harvey Smith, Northern Illinois University