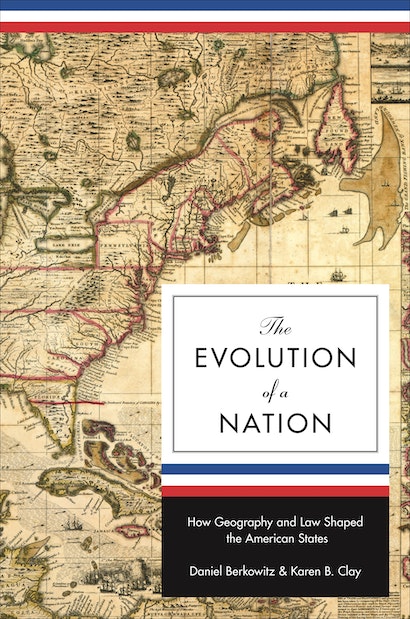 Although political and legal institutions are essential to any nation’s economic development, the forces that have shaped these institutions are poorly understood. Drawing on rich evidence about the development of the American states from the mid-nineteenth to the late twentieth century, this book documents the mechanisms through which geographical and historical conditions — such as climate, access to water transportation, and early legal systems — impacted political and judicial institutions and economic growth.


The book shows how a state’s geography and climate influenced whether elites based their wealth in agriculture or trade. States with more occupationally diverse elites in 1860 had greater levels of political competition in their legislature from 1866 to 2000. The book also examines the effects of early legal systems. Because of their colonial history, thirteen states had an operational civil-law legal system prior to statehood. All of these states except Louisiana would later adopt common law. By the late eighteenth century, the two legal systems differed in their balances of power. In civil-law systems, judiciaries were subordinate to legislatures, whereas in common-law systems, the two were more equal. Former civil-law states and common-law states exhibit persistent differences in the structure of their courts, the retention of judges, and judicial budgets. Moreover, changes in court structures, retention procedures, and budgets occur under very different conditions in civil-law and common-law states.

The Evolution of a Nation illustrates how initial geographical and historical conditions can determine the evolution of political and legal institutions and long-run growth.

"In this book, economists Berkowitz and Clay use variation across U.S. states as a sort of historical economic laboratory. Drawing on a wide array of quantitative and qualitative data sources, they lay out and document the connections among a number of geographic and climatic characteristics and the extent of political competition that emerged in each state. . . . This is an important contribution to the literature on institutional economics, economic history, and economic development."—Choice

"Berkowitz and Clay deserve considerable credit for taking up the difficult challenge of applying the ES (Engerman-Sokoloff) and AJR (Acemoglu-Johnson-Robinson) approach to the experience of U.S. states. Certainly anyone else contemplating something similar will need to study this book very carefully because they will have to grapple with some of the same issues faced by the authors. The book is timely, well written, and the authors have amassed an interesting body of data."—Robert A. Margo, EH.Net

"Berkowitz and Clay build a compelling empirical case for their broad argument. . . . The Evolution of a Nation is an important and useful work, one that will be of interest to economists, historians, and political scientists with an interest in American political and economic development."—Thomas Oatley, Journal of Regional Science

"The strength of The Evolution of a Nation lies in the collected historical and recent data. All these are sufficiently displayed on charts, graphs, appendices, which cover over eighty pages in the body of the book. The meticulously written introduction and overview provide a methodological model to those for ongoing research. Complying with the expectations of the authors, the book stands at the intersection between economics, history, law and politics and can be beneficial within the classroom setting of these disciplines at undergraduate and graduate levels. Furthermore, as it presents stimulating discussions and raises new questions about law, legal intuitions, economic growth, it can be a reference book for the years to come in historical and sociological studies."—N. Sibel Gu?zel, European Journal of American Studies

"In this book, Berkowitz and Clay make major contributions to understanding the nature of economic development. They do a superb job examining the evidence about the importance of geography, institutions, and laws in influencing the causes and consequences of state courts and legislatures from the colonial era up to today. Their approach and findings will become central to the ongoing study of economic growth."—Stanley L. Engerman, University of Rochester

"This remarkable book tackles one of the most important and yet underresearched topics in institutional economics: how institutions persist over time and the mechanisms via which they do so. Focusing on political competition and judicial independence across U.S. states, the book combines rich historical narrative with sophisticated social science and is a must-read for anyone with an interest in comparative institutional and economic development."—James Robinson, Harvard University

"Berkowitz and Clay not only produce convincing evidence of the effect of political competition and judicial independence on economic performance in American states. They also present a fascinating and comprehensive institutional history of the United States using the latest quantitative tools in the social sciences. A great piece of modern institutional and historical analysis."—Gerard Roland, University of California, Berkeley

"This book is the latest evidence suggesting that institutions have long lasting effects on the organization and performance of societies. Using the legal origins of American states, Berkowitz and Clay show that accidents of being colonized by a common or civil law power reverberate right up to the present day. Their results challenge those who believe that institutions are not important in economic history. They also challenge those who believe institutions are important to explain how, despite ongoing institutional change, patterns from the past continue to influence behavior in the present."—John Wallis, University of Maryland

"Berkowitz and Clay provide an imaginative integration of recent scholarship from a wide range of disciplines, including economics, political economy, economic geography, the theory of institutions, and law. The result is a fresh look at American history which emphasizes the persistence of institutions and the long-term implications of common law versus civil law traditions in the various colonies."—Barry Weingast, Stanford University

"This book is a tour de force on the persistent but often neglected influence of geography on the development of key political and legal institutions in the U.S. states. Along the way, it pulls off the seemingly impossible by opening up new lines of inquiry in not one but as many as four disciplines: law, economics, political science, and history."—Lee Epstein, University of Southern California