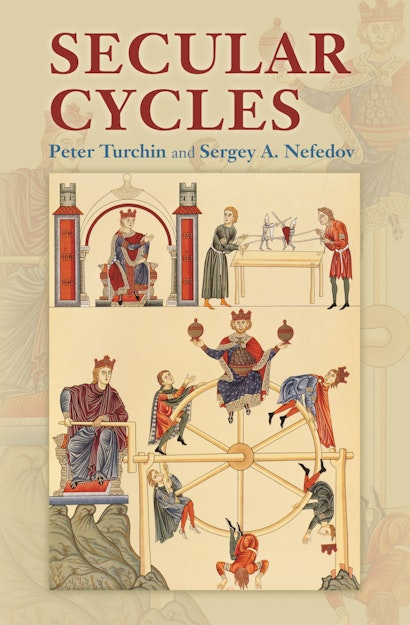 Many historical processes exhibit recurrent patterns of change. Century-long periods of population expansion come before long periods of stagnation and decline; the dynamics of prices mirror population oscillations; and states go through strong expansionist phases followed by periods of state failure, endemic sociopolitical instability, and territorial loss. Peter Turchin and Sergey Nefedov explore the dynamics and causal connections between such demographic, economic, and political variables in agrarian societies and offer detailed explanations for these long-term oscillations — what the authors call secular cycles.

Secular Cycles elaborates and expands upon the demographic-structural theory first advanced by Jack Goldstone, which provides an explanation of long-term oscillations. This book tests that theory’s specific and quantitative predictions by tracing the dynamics of population numbers, prices and real wages, elite numbers and incomes, state finances, and sociopolitical instability. Turchin and Nefedov study societies in England, France, and Russia during the medieval and early modern periods, and look back at the Roman Republic and Empire. Incorporating theoretical and quantitative history, the authors examine a specific model of historical change and, more generally, investigate the utility of the dynamical systems approach in historical applications.


An indispensable and groundbreaking resource for a wide variety of social scientists, Secular Cycles will interest practitioners of economic history, historical sociology, complexity studies, and demography.

Peter Turchin is professor of ecology and evolutionary biology and adjunct professor of mathematics at the University of Connecticut. Sergey A. Nefedov is senior research scientist at the Institute of History and Archaeology of the Russian Academy of Sciences, Ural Branch.

"This book is an audacious and ambitious attempt to promote the viewpoint that historical progression runs according to certain regular patterns. . . . I am fascinated by this book, particularly by the theoretical framework which is laid out in the introductory and concluding chapters. . . . [T]he main strength of the book lies in its scope, reminiscent of the broad perspectives of classical economists. It is the type of scholarship which proves that historical narrative can be fascinating."—Harry Kitsikopoulos, EH.net

"Those who are interested in grand social theories will want to read and reflect. I suspect that there will be many who then will rebut."—Brian J. L. Berry, American Journal of Sociology

"Secular Cycles is an ambitious, audacious, and engaging achievement from two very talented scholars. This stimulating book will attract interdisciplinary attention from those interested in global history and secular economic change."—Cormac Ó Gráda, author of Famine

"I am impressed and delighted by the breadth, rigor, creativity, originality, and power of this book. The graphs present the data in a fashion that will be clear to any audience, and the text is straightforward and persuasive. This book carries the study of historical dynamics to a whole new level."—Jack A. Goldstone, George Mason University