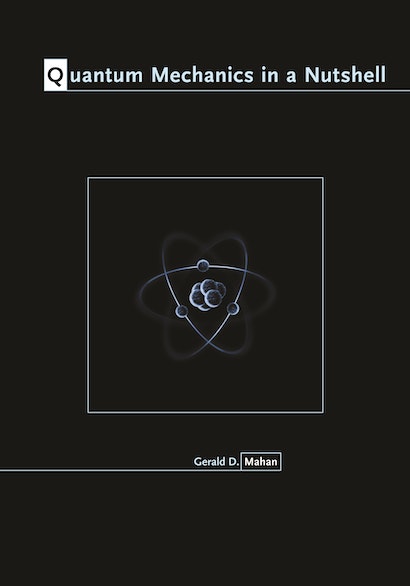 Covering the fundamentals as well as many special topics of current interest, this is the most concise, up-to-date, and accessible graduate-level textbook on quantum mechanics available. Written by Gerald Mahan, a distinguished research physicist and author of an acclaimed textbook on many-particle physics, Quantum Mechanics in a Nutshell is the distillation of many years’ teaching experience.


Emphasizing the use of quantum mechanics to describe actual quantum systems such as atoms and solids, and rich with interesting applications, the book proceeds from solving for the properties of a single particle in potential; to solving for two particles (the helium atom); to addressing many-particle systems. Applications include electron gas, magnetism, and Bose-Einstein Condensation; examples are carefully chosen and worked; and each chapter has numerous homework problems, many of them original.

Quantum Mechanics in a Nutshell expertly addresses traditional and modern topics, including perturbation theory, WKBJ, variational methods, angular momentum, the Dirac equation, many-particle wave functions, Casimir Force, and Bell’s Theorem. And it treats many topics — such as the interactions between photons and electrons, scattering theory, and density functional theory — in exceptional depth.


A valuable addition to the teaching literature, Quantum Mechanics in a Nutshell is ideally suited for a two-semester course.


Gerald D. Mahan is Distinguished Professor of Physics at Pennsylvania State University. He is the author of two previous physics textbooks, Many-Particle Physics and Applied Mathematics.

"Praises in no way can do full justice to the strength and detail of Mahan's well crafted and superb nutshell book. I found the book fascinating, stimulating and convincing and one can easily observe that the book is bursting with intellectual energy and ambition. I am not a rated scientist but as a student and follower of science and scientific projects since the beginning of my academic career, I have come across several books of topical interest but this time I enjoyed Quantum Mechanics in A Nutshell as a whole for its intelligence and manner of treatment of topics. All said and done, it is a book that can be enjoyed by any science student interested in quantum mechanics."—Uwe C. Tauber, Current Engineering Practice

"[A] comprehensive and up-to-date exploration of quantum mechanics."—Nature Physics

"This book, in spite of 11 chapters densely written, consists of a quick and very readable presentation of basic principles and an impressive number of applications of quantum mechanics. It can be profitably used in courses for beginning, intermediate and, in some cases, advanced students of physics."—Valter Moretti, Zentralblatt MATH

"This is an excellent textbook, written in a very readable style, and it should be perfectly accessible to beginning and intermediate physics graduate students. Gerald Mahan, the author of an acclaimed textbook on many-particle theory, has taught quantum mechanics extensively, and his thorough knowledge and deep understanding of the material is evident in every chapter of Quantum Mechanics in a Nutshell. Its examples are excellently worked out and it has many interesting homework problems."—Uwe C. Tauber, Virginia Tech

"This book compares well with other graduate textbooks on quantum mechanics, and I will seriously consider adopting it the next time I teach the subject. The choice of material is very good. Gerald Mahan has included both the usual standard topics and a large number of special topics, including some of current research interest. The book is rich in interesting applications, and each chapter has lots of well-chosen problems. If a student can master this book, he or she will have gained an excellent foundation in quantum mechanics."—David G. Stroud, Ohio State University