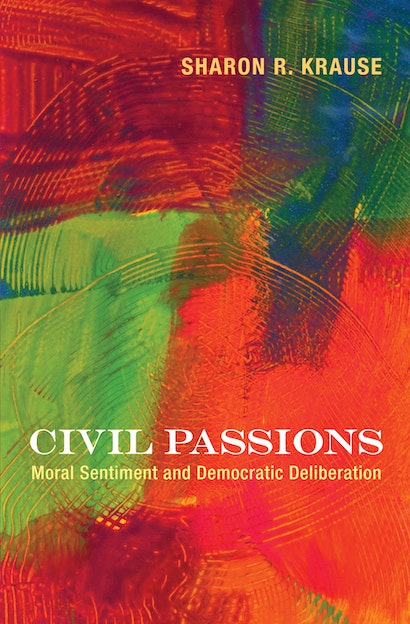 Must we put passions aside when we deliberate about justice? Can we do so? The dominant views of deliberation rightly emphasize the importance of impartiality as a cornerstone of fair decision making, but they wrongly assume that impartiality means being disengaged and passionless. In Civil Passions, Sharon Krause argues that moral and political deliberation must incorporate passions, even as she insists on the value of impartiality. Drawing on resources ranging from Hume’s theory of moral sentiment to recent findings in neuroscience, Civil Passions breaks new ground by providing a systematic account of how passions can generate an impartial standpoint that yields binding and compelling conclusions in politics. Krause shows that the path to genuinely impartial justice in the public sphere — and ultimately to social change and political reform — runs through moral sentiment properly construed. This new account of affective but impartial judgment calls for a politics of liberal rights and democratic contestation, and it requires us to reconceive the meaning of public reason, the nature of sound deliberation, and the authority of law. By illuminating how impartiality feels, Civil Passions offers not only a truer account of how we deliberate about justice, but one that promises to engage citizens more effectively in acting for justice.

Sharon R. Krause is associate professor of political science at Brown University. She is the author of Liberalism with Honor.

"Krause's Civil Passions is an ambitious work of political theory that attempts to bridge the age-old divide between reason and emotion in theories of moral and political judgment. . . . This is a well-written, cogently argued, provocative, and important contribution to recent scholarship on democratic deliberation, theories of justice, and the proper role of affect within the political realm."—Choice

"Sharon Krause offers a significant reinterpretation of the relations among reason, emotion, morality, and politics. Civil Passions will become a major reference point for philosophers, political theorists, and legal theorists working on a broad range of issues, including moral psychology, metaethics, deliberative democracy, and legitimacy."—Matthew D. Mendham, Journal of the Review of Politics

"As scholars of deliberation move this research agenda forward, they can be grateful to Krause . . . for bringing to the fore just how multidimensional deliberative democracy really is."—Jurg Steiner, Perspectives on Politics

"Civil Passions is a well-written contribution to this debate and will be of interest both to political theorists and to moral philosophers."—Liz Sutherland, Political Studies Review

"'Our minds are changed when our hearts are engaged,' With these words, Civil Passions takes a giant step forward in understanding the affective dimensions of political deliberation. Krause's challenge to the reason-based theories of Kant, Rawls, and Habermas, among others, will be debated—perhaps fiercely—by the next generation. She lays bare the fault lines of the issue and makes a compelling argument for basing moral motivation in affect. She also suggests how we might base moral norms themselves in reflective sentiments, or impartial feelings about feelings. The book is thoughtful and inspired, powered by acute powers of analysis and a lively sensibility."—Jane Mansbridge, Harvard University

"In recent years scholars have increasingly argued that affect plays a greater role in our practical reasoning than is traditionally admitted. Krause agrees, but she also knows that this insight is really only the announcement of the need for a major undertaking: understanding exactly how passions necessarily inform our reason and how 'civil passions' and 'affective impartiality' ought to guide our judgment, deliberation, and decision making in moral and political life. Her book takes up this task with real imagination, careful argumentation, and original insight."—Stephen K. White, University of Virginia

"Civil Passions is an ambitious attempt to restore Hume's account of moral sentiment as an alternative to the Kantian perspective that dominates contemporary political theory, and to flesh out the significance of the Humean approach for contemporary liberal democracy. This is an important book."—William A. Galston, Brookings Institution

"This superb book is beautifully written; contains an elegant and finely honed argument; and makes a highly original contribution to contemporary deliberative democratic theory, contemporary theories of emotions in politics, and the philosophical literature on David Hume. Krause puts forward a clearer and more convincing account of the role played by sentiments and concerns in the processes of democratic deliberation and norm justification than any other contemporary theorist of affect."—Christina Tarnopolsky, McGill University