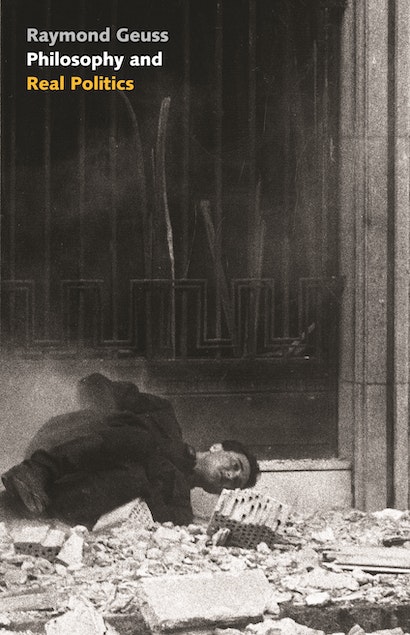 Many contemporary political thinkers are gripped by the belief that their task is to develop an ideal theory of rights or justice for guiding and judging political actions. But in Philosophy and Real Politics, Raymond Geuss argues that philosophers should first try to understand why real political actors behave as they actually do. Far from being applied ethics, politics is a skill that allows people to survive and pursue their goals. To understand politics is to understand the powers, motives, and concepts that people have and that shape how they deal with the problems they face in their particular historical situations.

Raymond Geuss teaches philosophy at the University of Cambridge. His books include Outside Ethics (Princeton), Public Goods, Private Goods (Princeton), and The Idea of a Critical Theory.

"[Geuss's] intention in Philosophy and Real Politics, his short, sharp new book, is . . . to introduce a note of realism into contemporary philosophical debates about justice, by force if necessary."—Adam Kirsch, City Journal

"A manifesto for a new political philosophy. . . . Geuss's realist proposal brings forcefully to the contemporary political discussion the idea that philosophy is an engaged discipline, both in the sense of engagee, of directly speaking to the political issues of the day, and in the sense of having its own historical cultural commitments firmly in view."—Katerina Deligiorgi, The Philosopher's Magazine

"[G]iven the current trends in political philosophy, Geuss's book is both timely and extremely important. One of Geuss's many virtues as a political philosopher is his ability to effectively confront philosophical complacency, and this superb book is surely successful in this regard."—David Sherman, Social Theory and Practice

"In this new study, Raymond Geuss mobilizes the strength of analytical philosophy to subvert the theoretical premises of contemporary political philosophy. He replaces its fixation on ideal norms and its abstraction from real confrontations with an orientation toward contexts of action and a rigorous concentration on the importance of political power. It is fascinating to see the result: a political philosophy that is once again a kind of intellectual craft, historically situated and locally engaged."—Axel Honneth, J. W. Goethe University, Frankfurt

Raymond Geuss is the most sophisticated and subtle philosopher who takes seriously the tradition of critical theory. His critique of formal political philosophy—including in neo-Kantian philosophy like that of the late John Rawls—that shuns the crucial roles of power, historical context, and political action is powerful and persuasive. This grand text is an intellectual breath of fresh air."—Cornel West, Princeton University

"Raymond Geuss's short, brilliant, and provocative book forces on political philosophers questions that we often prefer not to raise, let alone answer. Geuss takes seriously the disturbingly untidy character of many political transactions and the dangers of idealized abstractions. His ruthlessness toward Nozick and Rawls is in striking contrast to the attitudes of most of their critics. And Geuss lives dangerously, prescribing remedies drawn from Lenin, Nietzsche, and Weber that may have unpredictable side effects."—Alasdair MacIntyre, University of Notre Dame

"This is a small gem of a book. With his other recent work, it establishes Geuss as a unique voice in political theory. Not everyone will find his arguments persuasive, and some will doubtless take offense, but there is something interesting, perceptive, and thought provoking on every page. It will stir debate."—Glyn Morgan, Harvard University

"There is much to learn from and disagree with here. This book is vigorous in its arguments, displays an impressive historical sweep, and on several occasions gets in the perfect skewering criticism."—Leif Wenar, University of Sheffield