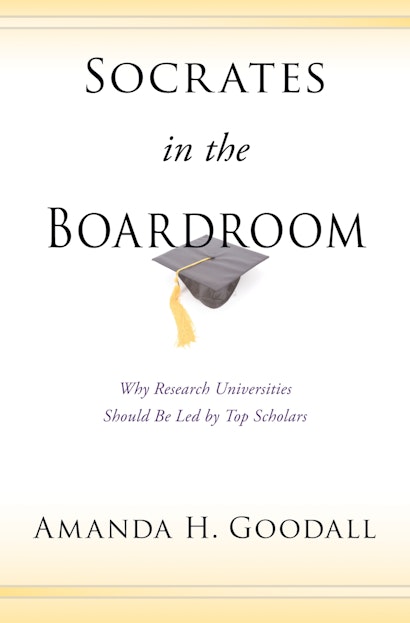 Socrates in the Boardroom argues that world-class scholars, not administrators, make the best leaders of research universities. Amanda Goodall cuts through the rhetoric and misinformation swirling around this contentious issue—such as the assertion that academics simply don’t have the managerial expertise needed to head the world’s leading schools—using hard evidence and careful, dispassionate analysis. She shows precisely why experts need leaders who are experts like themselves.

Goodall draws from the latest data on the world’s premier research universities along with in-depth interviews with top university leaders both past and present, including University of Pennsylvania President Amy Gutmann; Derek Bok and Lawrence Summers, former presidents of Harvard University; John Hood, former vice chancellor of the University of Oxford; Cornell University President David Skorton; and many others. Goodall explains why the most effective leaders are those who have deep expertise in what their organizations actually do. Her findings carry broad implications for the management of higher education, and she demonstrates that the same fundamental principle holds true for other important business sectors as well.

Experts, not managers, make the best leaders. Read Socrates in the Boardroom and learn why.

Amanda H. Goodall is a Leverhulme Fellow at Warwick Business School at the University of Warwick. 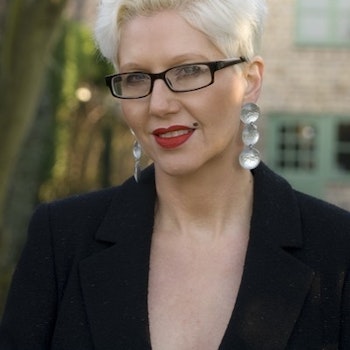 "Can one prove that colleges or universities are best off with real academics as leader? Amanda H. Goodall thinks you can, at least with regard to research universities. . . . Socrates in the Boardroom is a mix of quantitative and philosophical arguments."—Scott Jaschik, Inside Higher Ed

"There is much to Goodall's argument, particularly in such difficult times. . . Goodall's work argues against the recent trend toward appointing as the college leader a person from outside of higher education."—Laura Skandera Trombley, Chronicle Review

"Goodall draws from the latest data on the world's premier research universities and in-depth interviews with top university leaders to explain why the most effective leaders are those who have deep expertise in what their organisations do. Her findings carry broad implications for the management of higher education."—Society Now

"Goodall has penned a clearly written argument on the virtues of specialization and specialized knowledge. She reminds her reader, time and again, that she believes that research universities thrive when highly cited scholars occupy positions of influence. There is much in here to consider, and many audiences who will find the book to be accessible."—Christopher C. Morphew, Higher Education Journal

"I started reading this book with some skepticism, since I was doubtful that a convincing empirical case could be made for its key empirical proposition—that research universities should be led by top scholars. I was wrong. This is a first-rate piece of work that combines sensitive use of quantitative data with strong qualitative data. Although the topic is obviously important and frequently discussed, I know of no other systematic study of it. The book should be read by people in the business of identifying university presidents, and also by students of leadership and organizational practice."—William G. Bowen, former president of Princeton University and coauthor of The Shape of the River

"An invaluable and convincing case for why knowledge-based organizations such as major research universities and R & D organizations would increase the probability of success by choosing for their top leadership roles those who are acknowledged thought leaders and experts in their field."—Warren Bennis, distinguished professor of business at the University of Southern California, author of On Becoming a Leader, and coauthor of Transparency

"This is a fascinating book, focused primarily—but not exclusively—on correlations between the excellence of universities and the academic distinction of their leaders. Goodall demonstrates significant such correlations, particularly for American universities. This is a book of considerable interest and significance, and it should be required reading for every university trustee or governor."—Robert M. May, University of Oxford

"Goodall argues that the best research universities are run by the best scholars—it is not enough for a university president to be a good manager. This is an important message that all universities need to hear. I strongly recommend this book to anyone interested in the future health of the world's leading universities."—Sir Paul Nurse, president of Rockefeller University and winner of the 2001 Nobel Prize in medicine

"Goodall dispels any doubts about the wisdom of selecting leaders for major research universities who are themselves well-recognized researchers. She demonstrates that the skills associated with a productive research career not only can coexist with those required for the effective leadership of a great university, but may even predict such leadership. This volume should be read by anyone involved in the selection of a university president or chancellor."—Susan Folkman, University of California, San Francisco

"Should research universities be led by top scholars? Amanda Goodall provides very compelling arguments why they should. This extraordinarily well-written book presents both quantitative and qualitative evidence and draws on a wide variety of social sciences. Socrates in the Boardroom is a must-read for anyone interested in the academic enterprise."—Ronald G. Ehrenberg, Cornell University

"The main argument in this well-written book—that top research universities should be led by top scholars—is tackled from a number of different angles using a variety of evidence and a range of examples. Socrates in the Boardroom is likely to appeal to a broad audience."—Rosemary Deem, University of Bristol