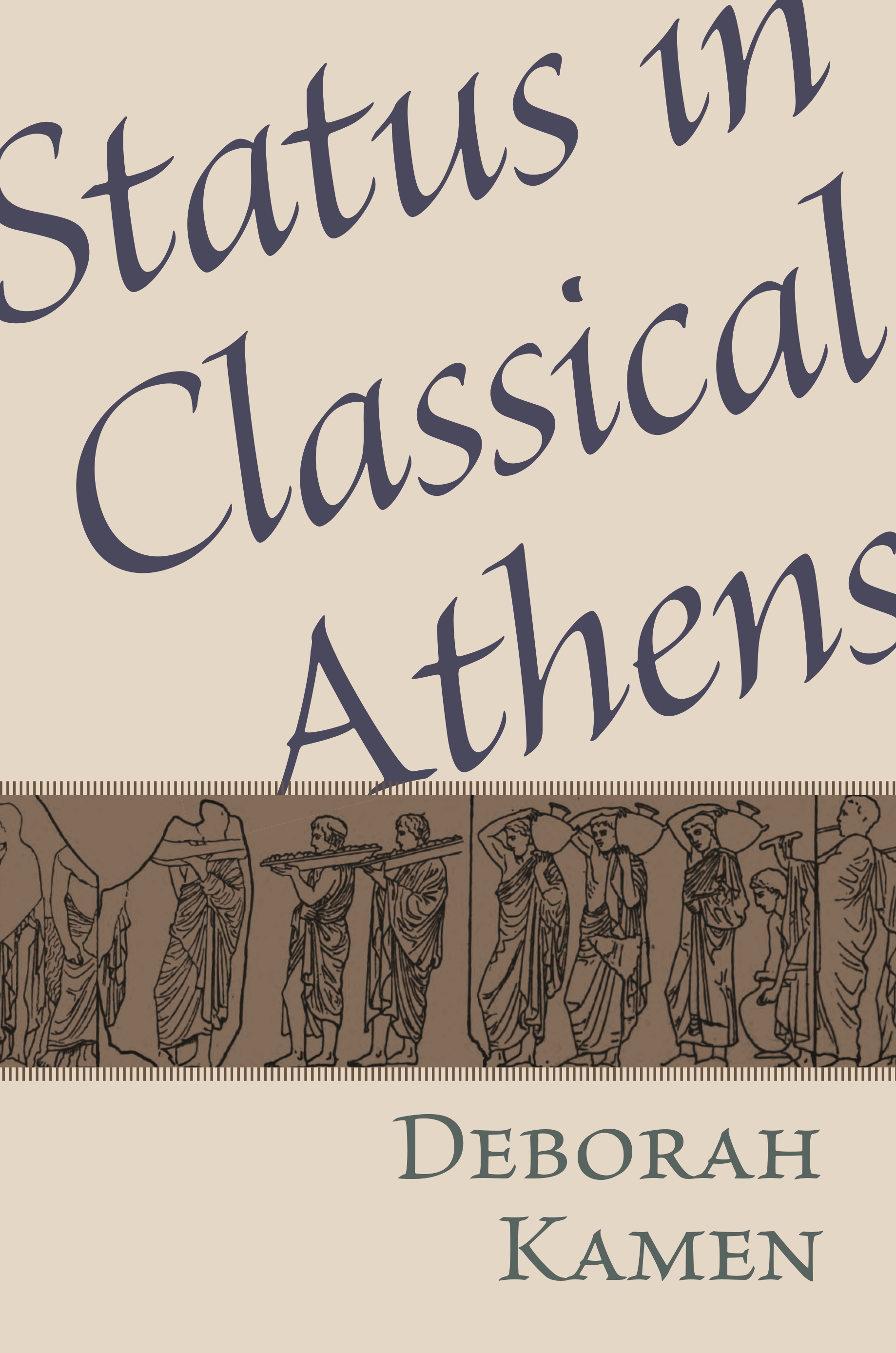 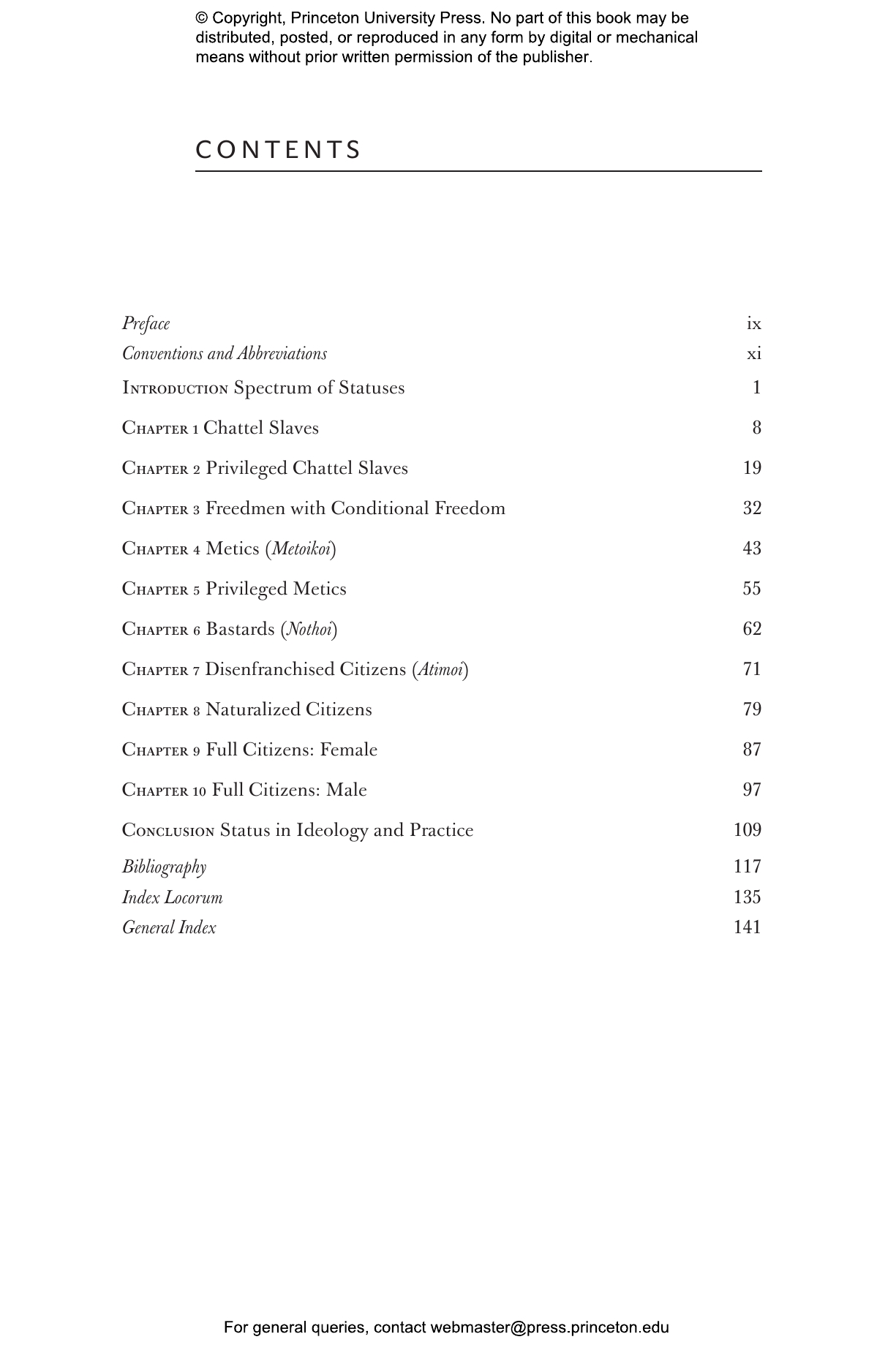 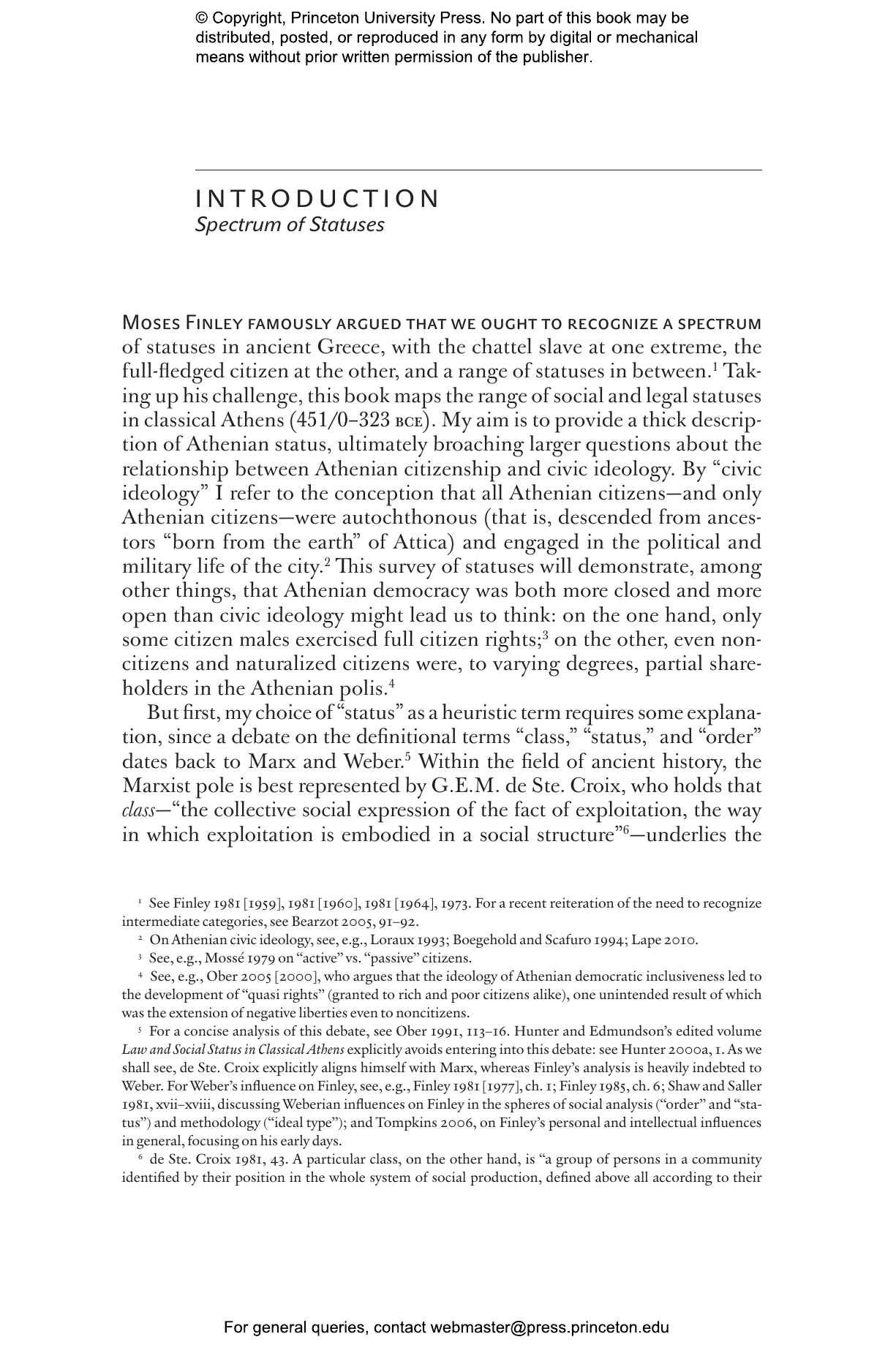 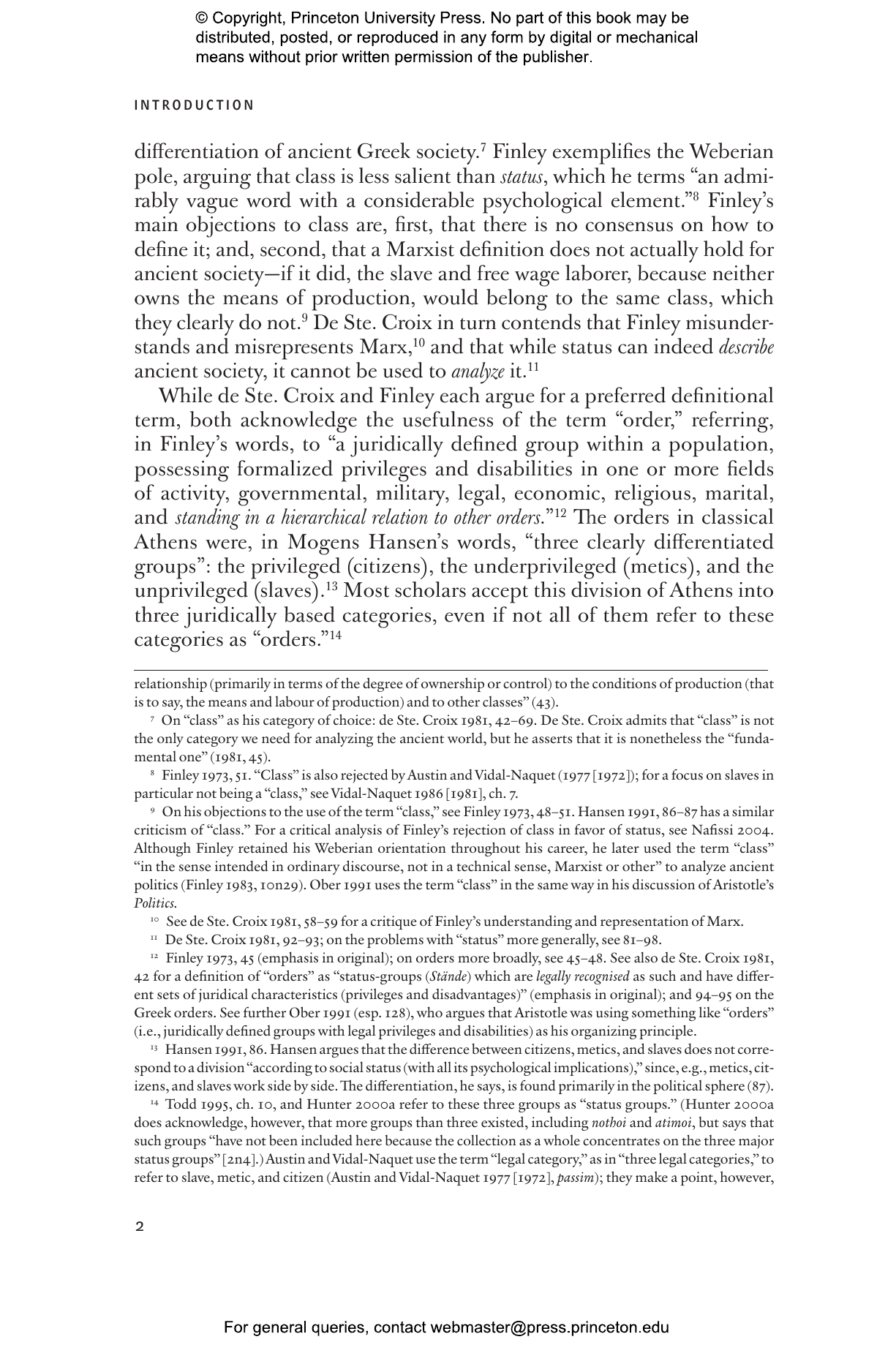 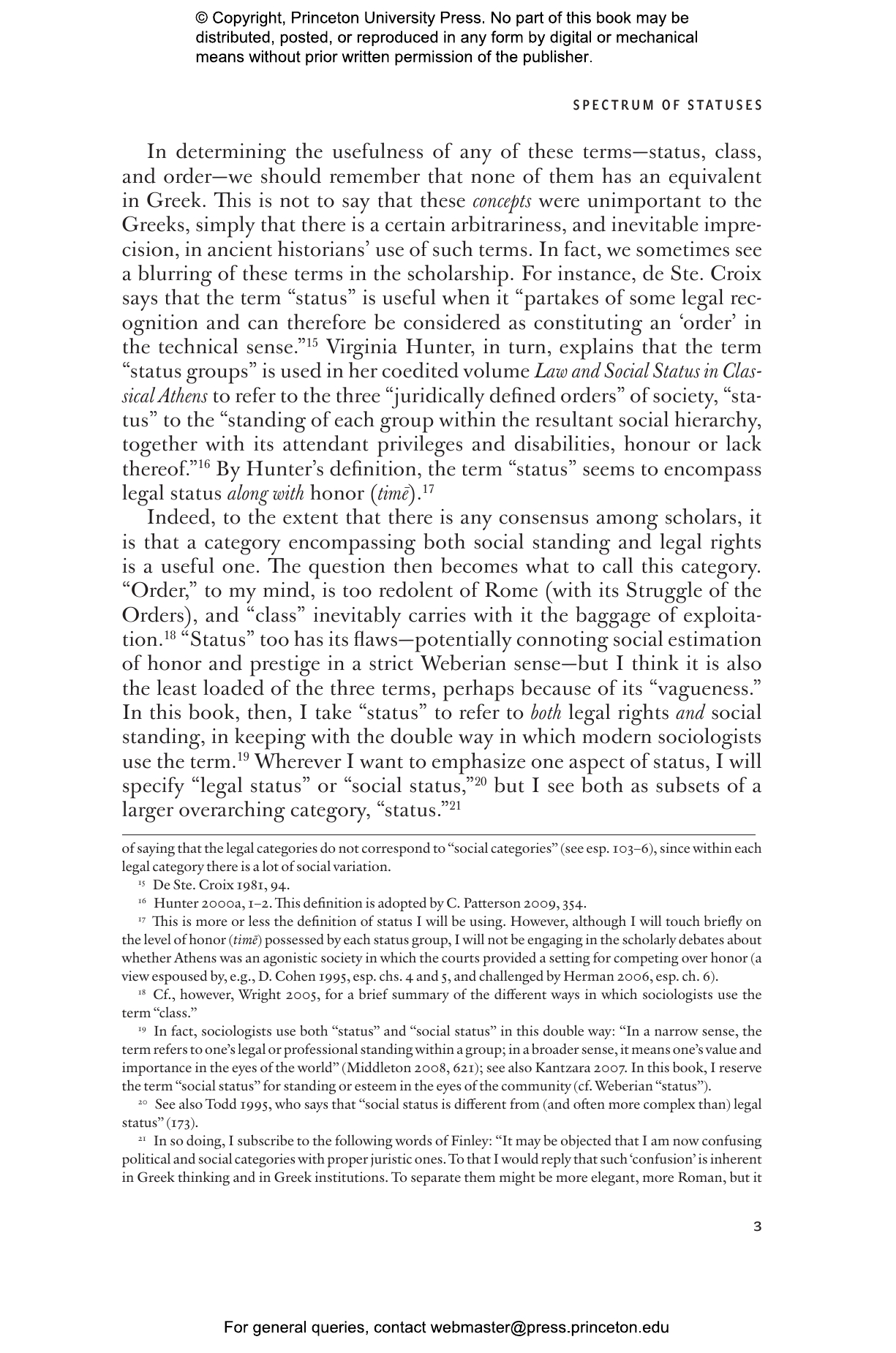 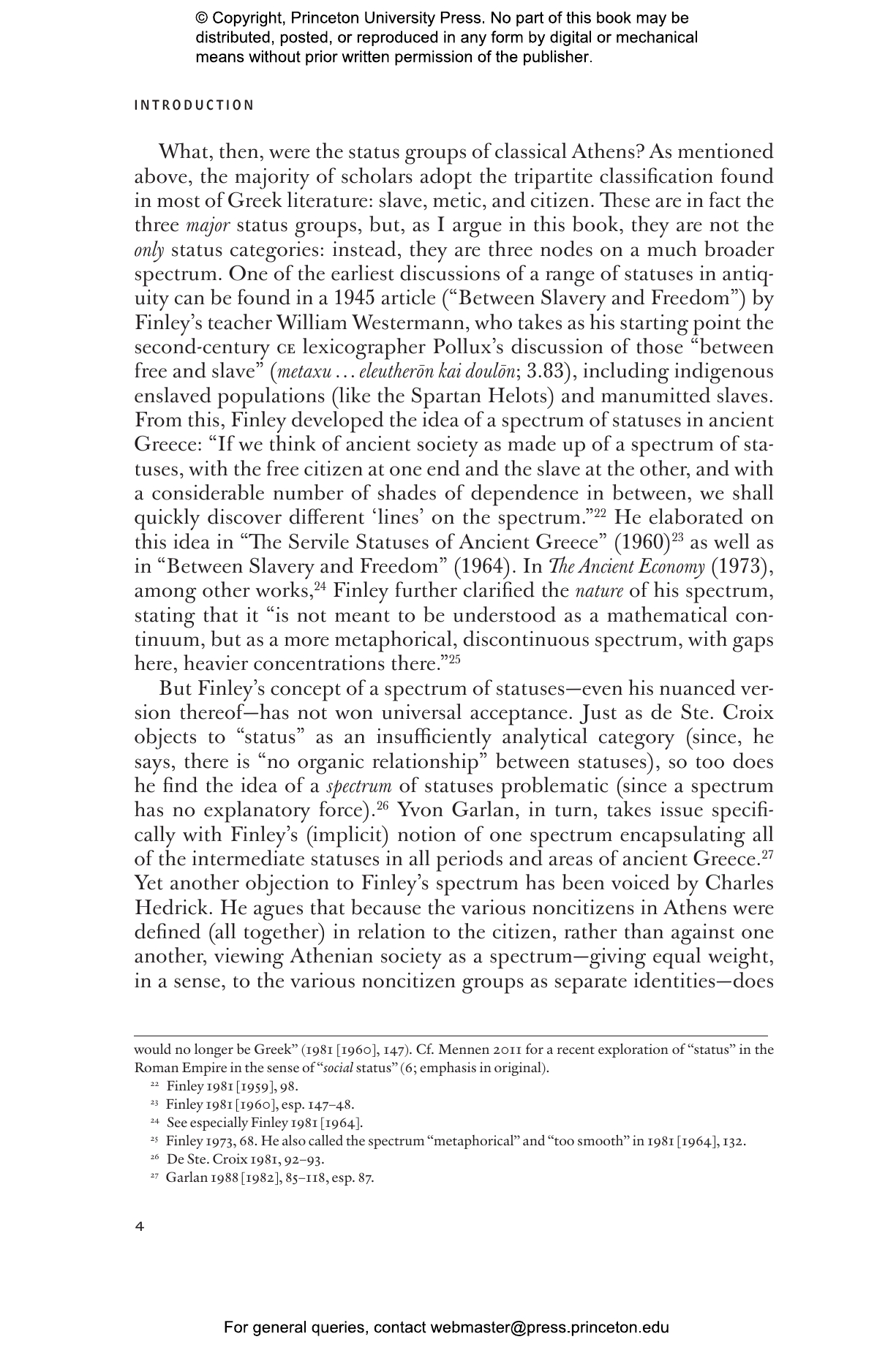 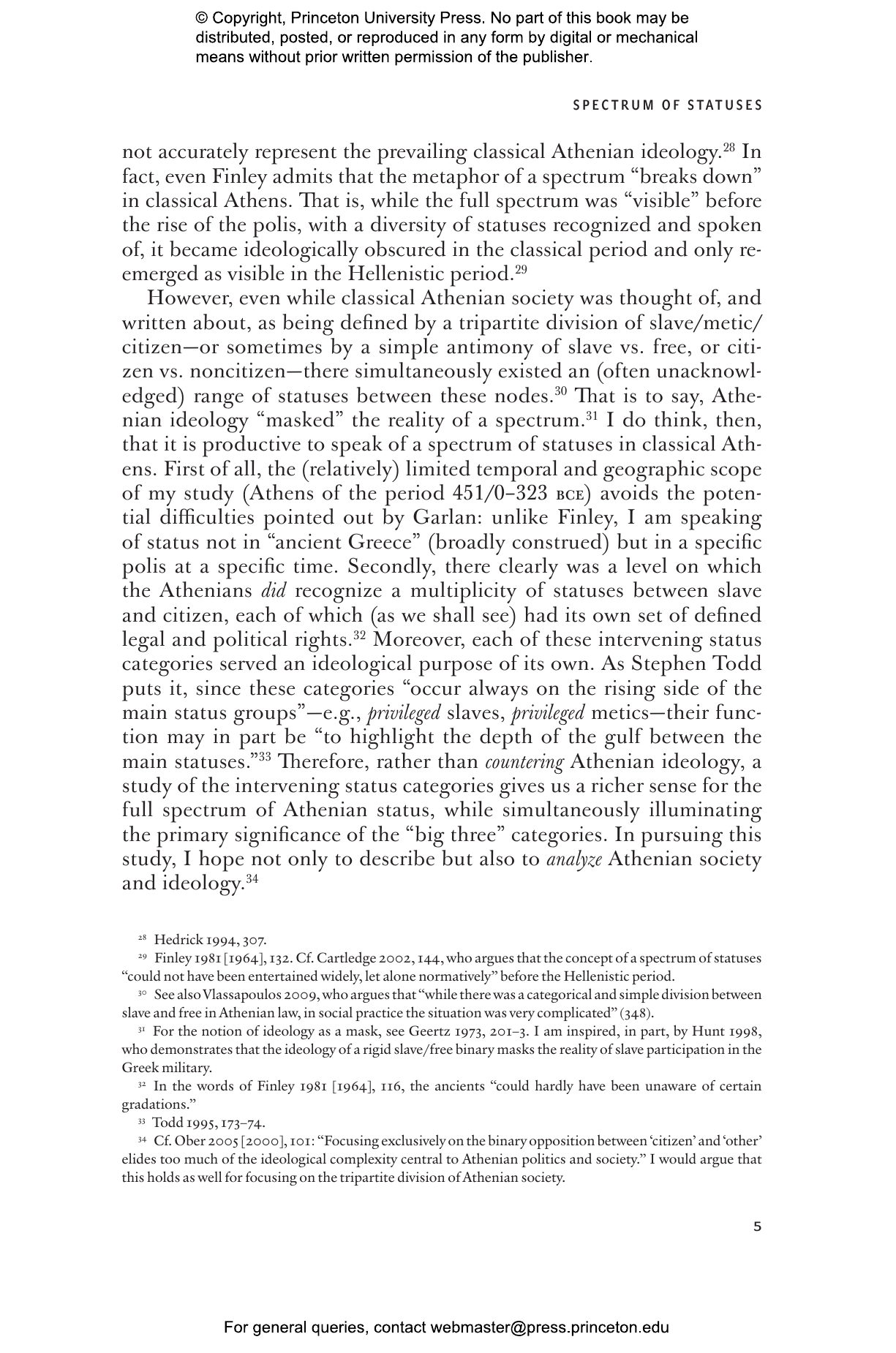 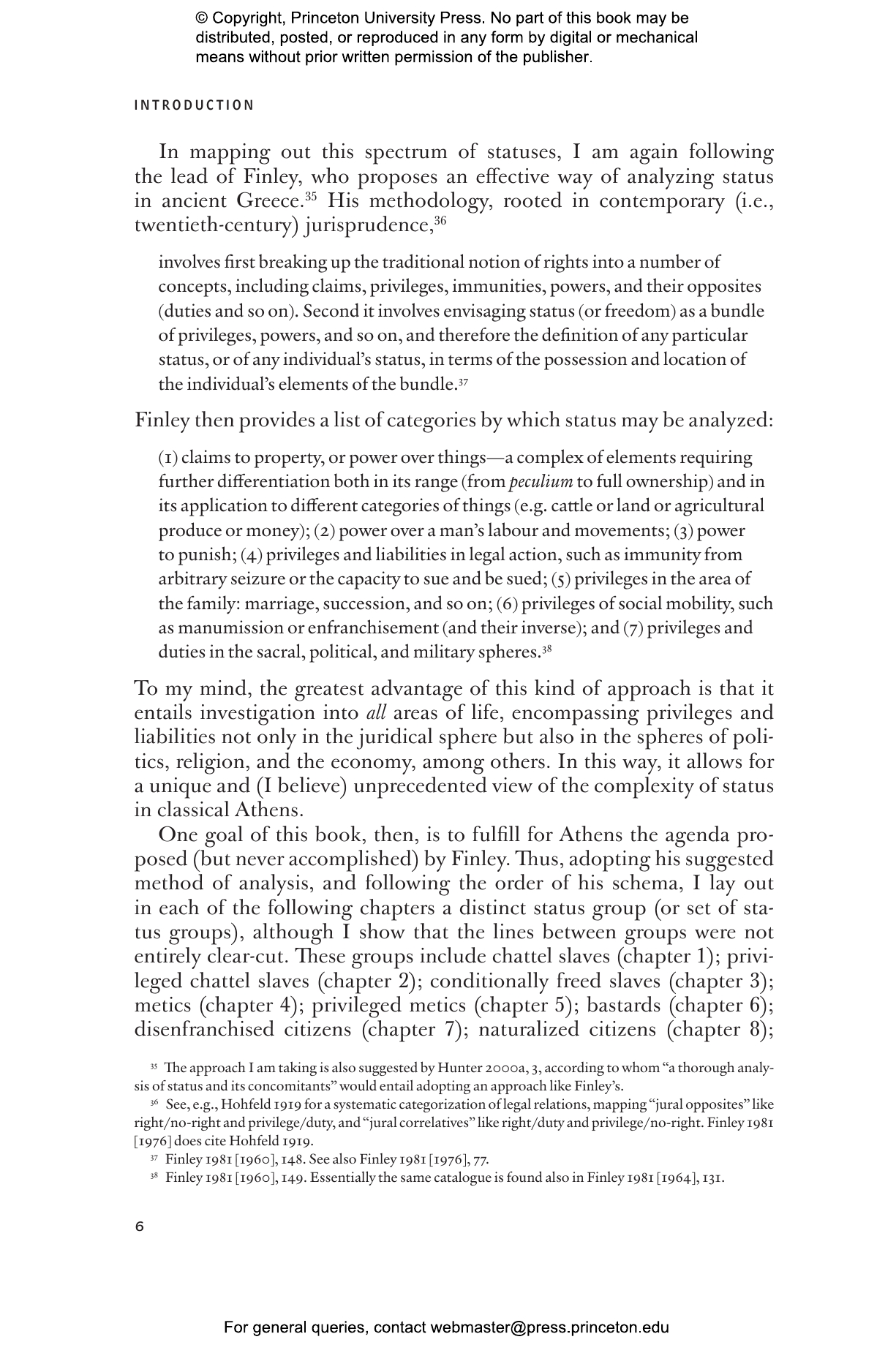 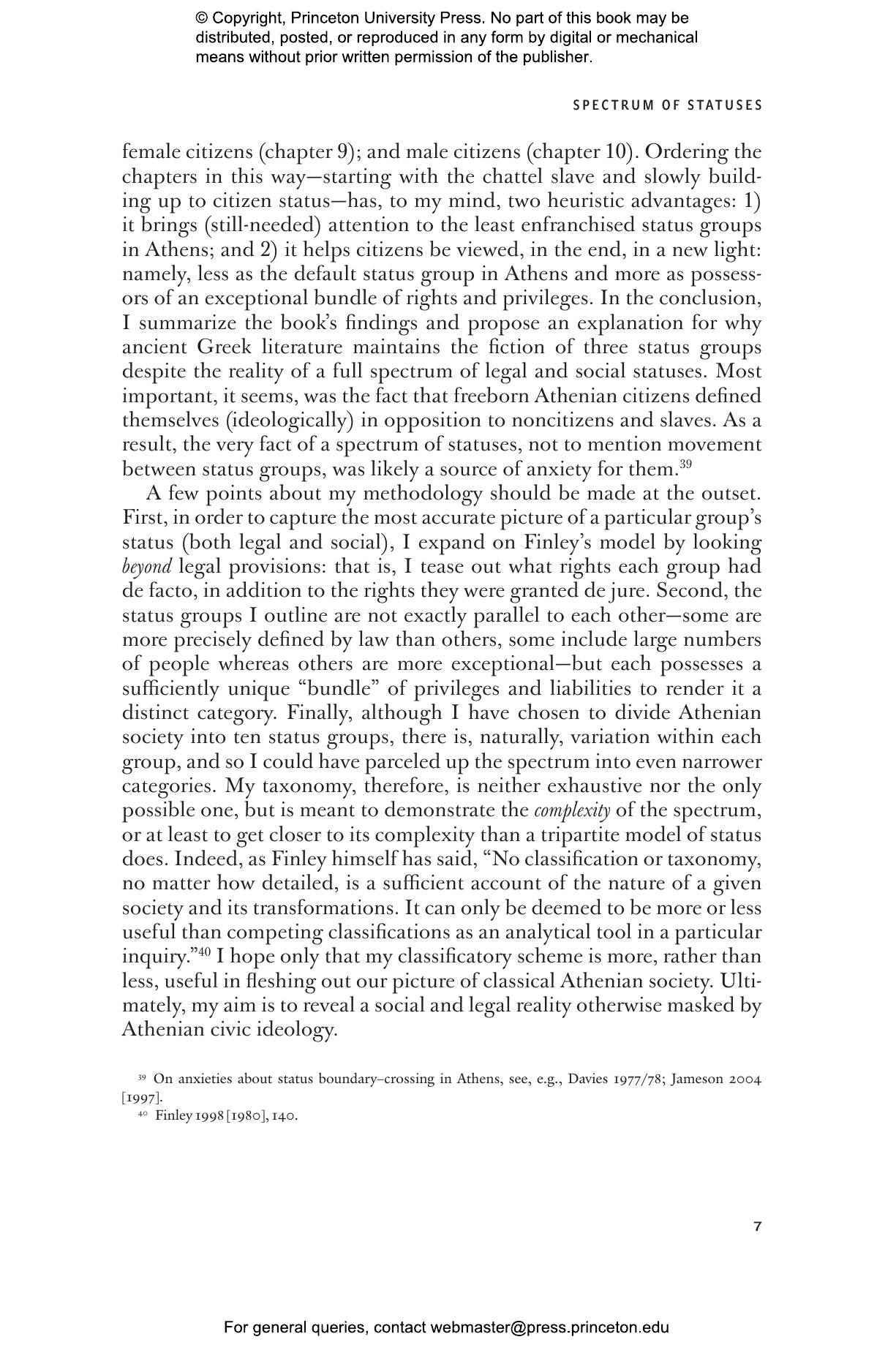 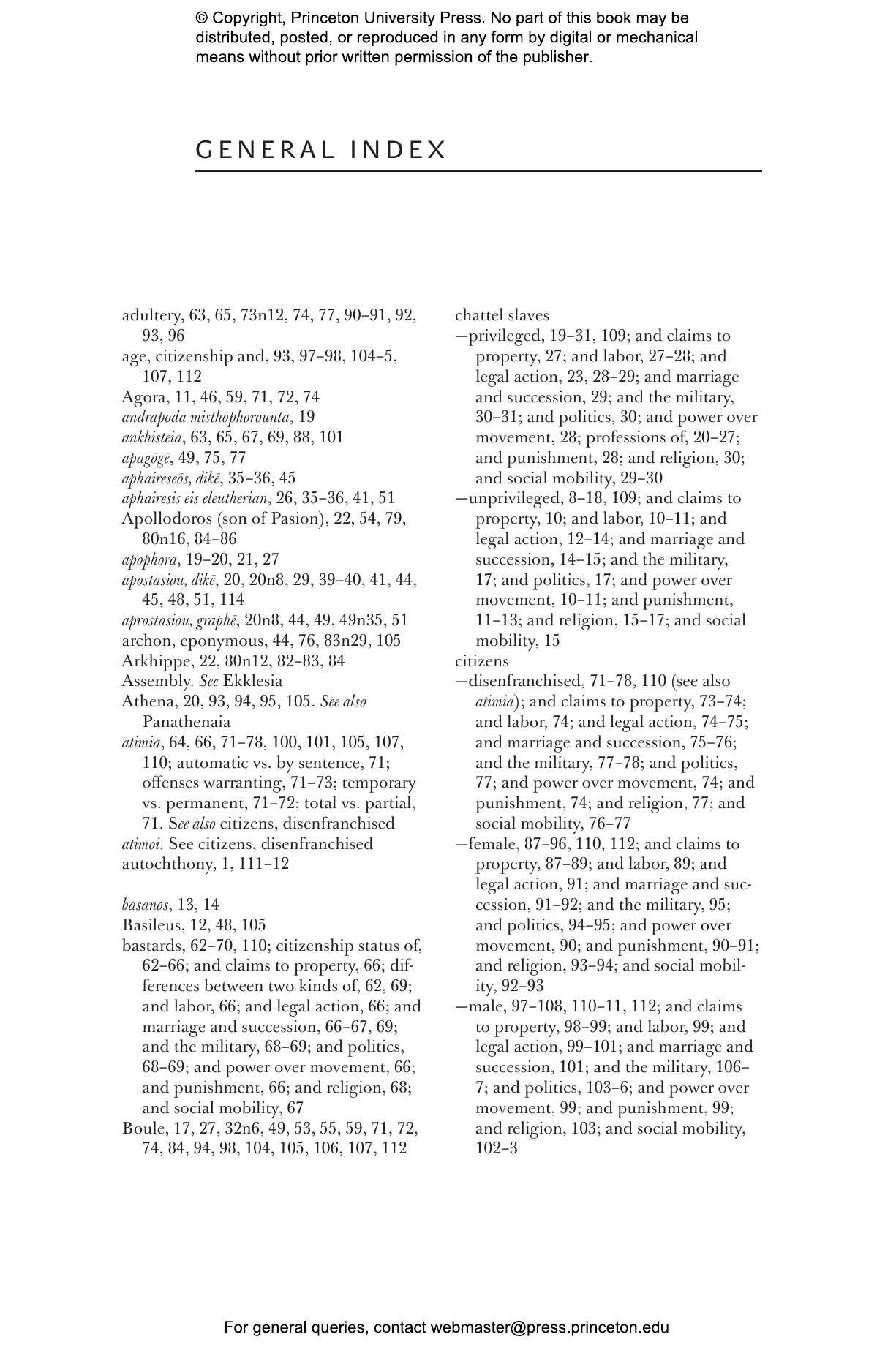 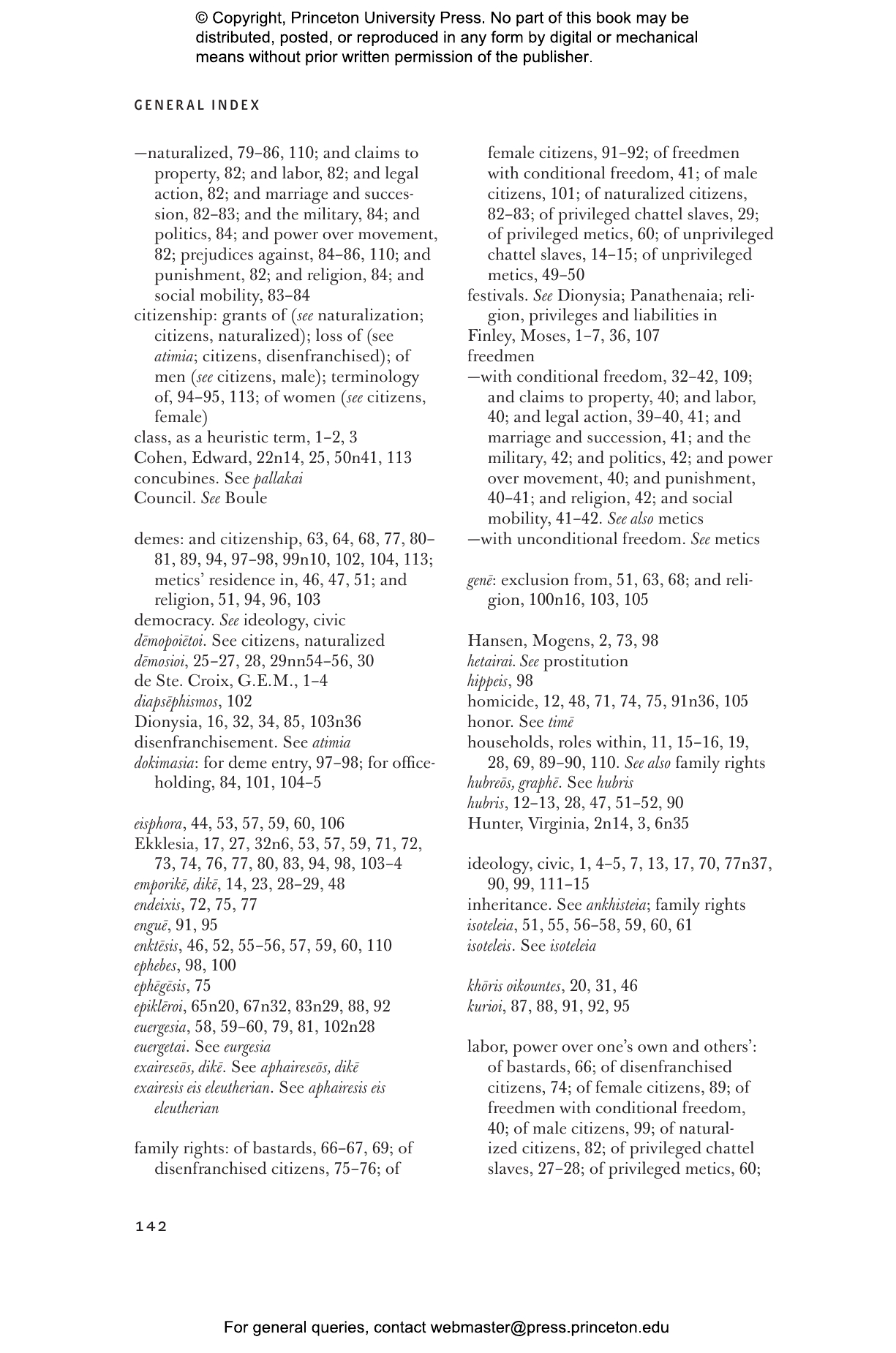 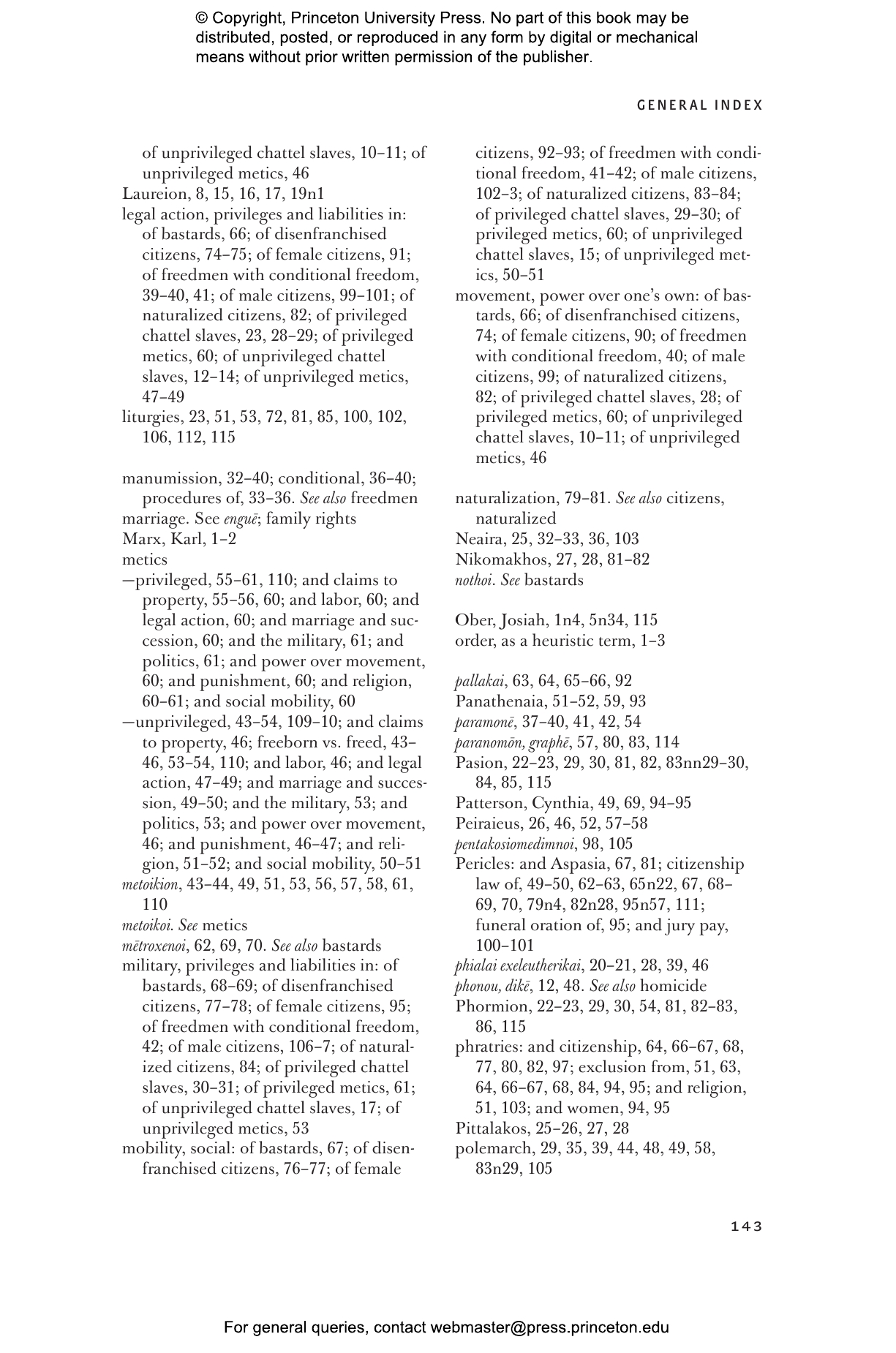 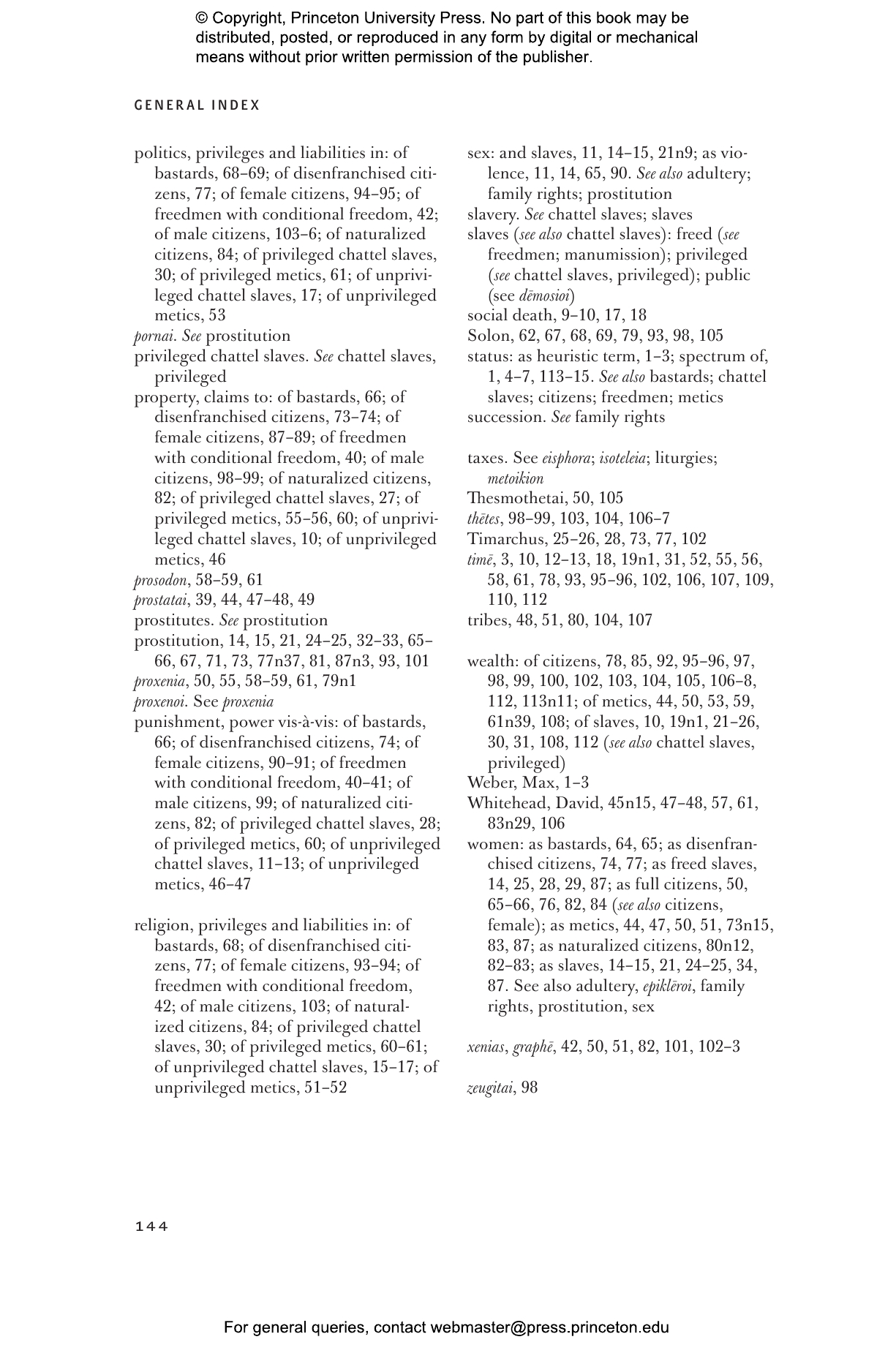 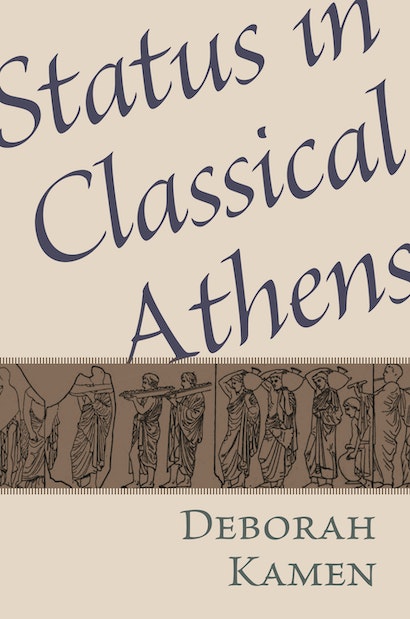 Ancient Greek literature, Athenian civic ideology, and modern classical scholarship have all worked together to reinforce the idea that there were three neatly defined status groups in classical Athens — citizens, slaves, and resident foreigners. But this book — the first comprehensive account of status in ancient democratic Athens — clearly lays out the evidence for a much broader and more complex spectrum of statuses, one that has important implications for understanding Greek social and cultural history. By revealing a social and legal reality otherwise masked by Athenian ideology, Deborah Kamen illuminates the complexity of Athenian social structure, uncovers tensions between democratic ideology and practice, and contributes to larger questions about the relationship between citizenship and democracy.


Each chapter is devoted to one of ten distinct status groups in classical Athens (451/0-323 BCE): chattel slaves, privileged chattel slaves, conditionally freed slaves, resident foreigners (metics), privileged metics, bastards, disenfranchised citizens, naturalized citizens, female citizens, and male citizens. Examining a wide range of literary, epigraphic, and legal evidence, as well as factors not generally considered together, such as property ownership, corporal inviolability, and religious rights, the book demonstrates the important legal and social distinctions that were drawn between various groups of individuals in Athens. At the same time, it reveals that the boundaries between these groups were less fixed and more permeable than Athenians themselves acknowledged. The book concludes by trying to explain why ancient Greek literature maintains the fiction of three status groups despite a far more complex reality.

Deborah Kamen is assistant professor of classics at the University of Washington.

"Kamen offers a brief, sensible, inexpensive, and generally persuasive survey of the spectrum of status in Athens. . . . [K]amen's well-annotated, sensible survey is an excellent place for scholars and advanced students to start research on any of these groups."—Choice

"[T]his is a stimulating and important book. It will prove indispensable reading for anyone interested in ancient Athenian society and an essential item in reading lists for academic courses. Kamen takes a fresh look at the texture of Athenian society, and given the breadth of material covered she does an excellent job in demonstrating its multifarious nature in a clear and accessible style."—Rachel Zelnick-Abramovitz, Scripta Classica Israelica

"This is a very well-researched and important contribution to scholarship. Deborah Kamen's argument that Athenian civic ideology has obscured the complexity of statuses in classical Athens is persuasive, as is her detailed discussion of each of the status categories. There is great value in having the evidence for all of the status groups presented together in a single book rather than in separate specialized studies. In lucid prose, Kamen carries out this project with clear-sighted precision."—Sara Forsdyke, University of Michigan