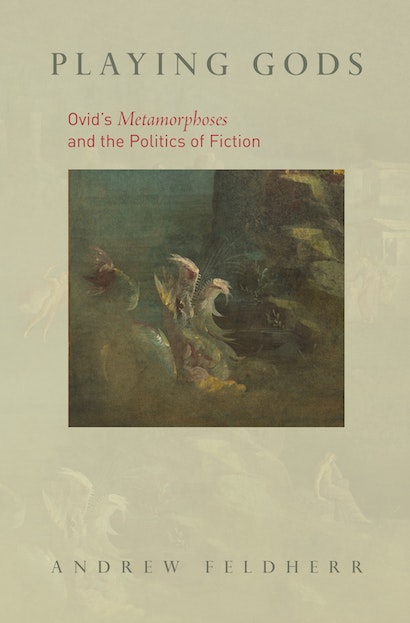 This book offers a novel interpretation of politics and identity in Ovid’s epic poem of transformations, the Metamorphoses. Reexamining the emphatically fictional character of the poem, Playing Gods argues that Ovid uses the problem of fiction in the text to redefine the power of poetry in Augustan Rome. The book also provides the fullest account yet of how the poem relates to the range of cultural phenomena that defined and projected Augustan authority, including spectacle, theater, and the visual arts.


Andrew Feldherr argues that a key to the political as well as literary power of the Metamorphoses is the way it manipulates its readers’ awareness that its stories cannot possibly be true. By continually juxtaposing the imaginary and the real, Ovid shows how a poem made up of fictions can and cannot acquire the authority and presence of other discursive forms. One important way that the poem does this is through narratives that create a “double vision” by casting characters as both mythical figures and enduring presences in the physical landscapes of its readers. This narrative device creates the kind of tensions between identification and distance that Augustan Romans would have felt when experiencing imperial spectacle and other contemporary cultural forms.


Full of original interpretations, Playing Gods constructs a model for political readings of fiction that will be useful not only to classicists but to literary theorists and cultural historians in other fields.

Andrew Feldherr is professor of classics at Princeton University. He is the author of Spectacle and Society in Livy's History and the editor of The Cambridge Companion to the Roman Historians.

"[Playing Gods] ranges widely over some important aspects of Roman culture and history and offers detailed and penetrating readings of Ovid's text. Most impressively, it allows cultural institutions and poetry to interpret each other reciprocally, often to fruitful effect. . . . [Feldherr] has gone a long way to explaining the potential and relevance of metamorphosis, the theme of classical antiquity's most influential book."—William Fitzgerald, Times Literary Supplement

"Feldherr's most influential work to date, this book sheds light on how, in ancient Roman literature, narrative viewpoint constructs and reconstructs power relations in the real world."—Choice

"Andrew Feldherr has produced a complex and sophisticated new reading of Ovid's Metamorphoses. Make no mistake, this is a dense and difficult book to read, but it offers many rewards to the assiduous reader. . . . Close readings throughout the work especially reveal Feldherr's theoretical sophistication, philological expertise, and literary sensitivity."—Sara Myers, New England Classical Journal

"Feldherr's nuanced close readings and original insights are entirely persuasive. Like Ovid's carmen perpetuum, while it can be sampled usefully for individual stories, readings or chapters, it is far better read—and re-read—as an interconnected whole. And the story it tells about the politics of Ovidian fiction makes highly rewarding reading."—Genevieve Liveley, Phoenix

"While its target audience may, arguably, exclude the non-expert, Playing Gods will be equally interesting and relevant to literary theorists and critics and cultural historians. Feldherr offers an attractive new model for reading politics in a work of fiction, and pushes, considerably further than recent studies of the Metamorphoses, the boundaries of our understanding of the interplay between narrative and exegesis, fiction and reality, and content and form in the reception of Ovid's poem."—Laura Jansen, Journal of Roman Studies

"This is a major study of a major poet, a book that will have to be taken very seriously by all students of Ovid and Augustan literature. It also has much to offer anyone who is interested in the cultural politics of other places and other times. Andrew Feldherr shows familiar passages in new, often startlingly new, lights."—Philip Hardie, Trinity College, University of Cambridge

"This fascinating book is a major achievement. Insightful and often brilliant, it sets a new standard for sustained close reading of Ovid. Andrew Feldherr brings the discussion of the politics of Ovidian metamorphosis to a new level of critical sophistication. What he has to say about the nature of poetic fiction, the ethics of representation and interpretation, and the complex interrelationship of poetics and politics is bound to stimulate, provoke, and in most cases convince."—Joy Connolly, New York University