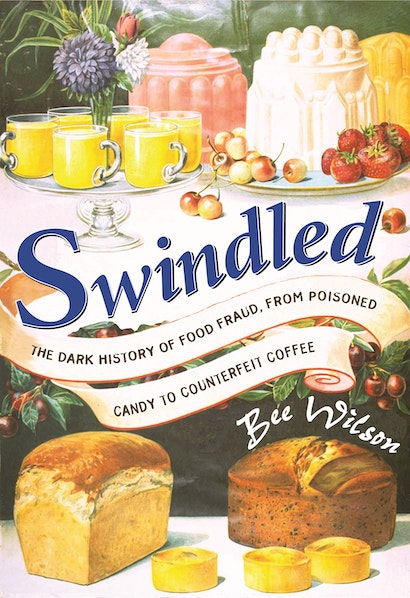 Bad food has a history. Swindled tells it. Through a fascinating mixture of cultural and scientific history, food politics, and culinary detective work, Bee Wilson uncovers the many ways swindlers have cheapened, falsified, and even poisoned our food throughout history. In the hands of people and corporations who have prized profits above the health of consumers, food and drink have been tampered with in often horrifying ways — padded, diluted, contaminated, substituted, mislabeled, misnamed, or otherwise faked. Swindled gives a panoramic view of this history, from the leaded wine of the ancient Romans to today’s food frauds — such as fake organics and the scandal of Chinese babies being fed bogus milk powder.


Wilson pays special attention to nineteenth- and twentieth-century America and England and their roles in developing both industrial-scale food adulteration and the scientific ability to combat it. As Swindled reveals, modern science has both helped and hindered food fraudsters — increasing the sophistication of scams but also the means to detect them. The big breakthrough came in Victorian England when a scientist first put food under the microscope and found that much of what was sold as “genuine coffee” was anything but — and that you couldn’t buy pure mustard in all of London.


Arguing that industrialization, laissez-faire politics, and globalization have all hurt the quality of food, but also that food swindlers have always been helped by consumer ignorance, Swindled ultimately calls for both governments and individuals to be more vigilant. In fact, Wilson suggests, one of our best protections is simply to reeducate ourselves about the joys of food and cooking.

Bee Wilson is the author of The Hive: The Story of the Honeybee and Us. She writes a weekly food column for London's Sunday Telegraph and is a former food critic for the New Statesman. She has been named Food Journalist of the Year by the Guild of Food Writers and Food Writer of the Year by BBC Radio 4.

"British food writer Bee Wilson's new book Swindled could not have been published at a more timely moment. Subtitled The Dark History of Food Fraud From Poisoned Candy To Counterfeit Coffee, it's a masterwork of Apocalypse Chow Anthropology, and examines the intentionally adulterated foods foisted on American and British eaters from Victorian times to the present. Swindled reads like an often-funny detective story with crazy characters perpetrating incredible foodie crimes—except that each case Ms. Wilson presents is true. Along the way, Ms. Wilson carefully points out how government policies that have liberalised free trade and encouraged globalization have served to increase profits for foodie crims, while exposing innocent eaters to grave harm."—Haphazard Gourmet Girls blog

"Wilson's latest treatise, on contaminated, adulterated, and fake foods in the modern era, feels almost prophetic. If there's a whiff of pedantry to the enterprise, Wilson overwhelms it with sheer detail: the flavor of lead salts, so delicious that they were used to sweeten wine; the fad for mock food in wartime Britain (mock chops made of flour, potato, and onion); the fact that Campbell's concealed marbles in the soup photographed for advertisements, to make it look thicker; Donald Rumsfeld's role as a champion of aspartame."—The New Yorker

"[L]ively and unsettling. . . . The blatant frauds of the nineteenth and early twentieth centuries are set alongside the more subtle (and mostly legal) tinkering with food in the modern world. . . . Wilson places contemporary concerns about what we are eating in an original and thought-provoking context."—Paul Freedman, Times Literary Supplement

"Timely, witty and purposeful, this thorough history should open a lot of eyes, and close some mouths."—Publishers Weekly

"[Wilson] wants to shake us awake, to make us look afresh at the food we eat. She does so triumphantly. . . . It is her considered and often humorous approach that makes this book so successful—and so alarming."—Clare Clark, Times

"Food producers, and whatever they can get away with, is . . . the subject of Bee Wilson's lively book. . . . Her focus is on two basics: poisoning and cheating. In early-19th-century Britain, there was plenty of both. For example, pickles were green from toxic copper, children's candies gained their bright colors from lead and other poisons, and the white bread of the upper crust was often bleached with alum."—Nina Ayoub, Chronicle of Higher Education

"Think the food we eat today is adulterated and unsafe to eat? Read this book and be amazed our ancestors ever survived to their next meal. . . . [Wilson's] intellectual rigor and disciplined research skills prove a great match with her seamless and engaging writing—she manages to bring history alive, and leaves you wanting more."—Guy Dimond, Time Out

"Marvellous and horrifying. . . . We're all caught in a food web, and Wilson shows us with urgent clarity how slender its strands are, and how little we can really trust them."—Diane Purkiss, Independent

"Sobering (yet entertaining) . . . Not much has changed in the basic logic of food production since [eighteenth- and nineteenth-century England], Wilson observes—save for the gradual effort to research the threats that adulteration poses, and the still slower progress toward the effective regulation of food."—Phoebe Connelly, BookForum

"An entertaining history of food adulteration, rather than a the-sky-is-falling warning."—Whitney Hallberg, ForeWord Magazine

"[R]iveting. . . . If ever a book could convince you that the only food worth eating is that which you have scrupulously shopped for in reputable local shops and cooked yourself from scratch, it is this one."—Val Hennessy, Mail on Sunday

"Food writer Bee Wilson brings a feisty, learned hand to this history of food swindles while coaxing dark comedy from a greed so biblically powerful it could kill. The adulterer's cabinet was full of ingenious horrors to bamboozle the public, and the quick-buck schemes are terrible and fascinating. Squaring the frauds with their greater economic and political contexts is where Wilson hits an artful stride. It is bracing to witness her social conscience as she explains how the shift from agricultural to industrial society dimmed our familiarity with traditional foods, how swindling sunders the trust of citizens, why the poor are disproportionately affected by swindles, and how the thievery is abetted by governments loath to intervene in the free market, for the laissez-faire state is on the lookout only when its revenues are jeopardized. Lest we feel distant from the wily 19th-century grocer, Wilson makes it gin clear that watering down, coloring up, bulking out, and plain poisoning are still with us, as are dyes, flavorings, and fortifiers—pettifogging, in a word, the same old deceit now legalized."—Peter Lewis, Barnes and Noble Review

"The cheerful cover of the book, decorated with breads, desserts and beverages, belies the subject matter inside. At a time when many people worry about commercially prepared foods, she offers a historical perspective on the ways food has been cheapened, falsified and poisoned over the centuries."—Susan Sprague Yeske, The Trenton Times

"Wilson is, no contest, the best stylist writing about food for newspapers in English . . . and her chapters on the early history of food fraud are strong stuff."—Harry Eagar, Maui News

"[Wilson's] writing is engaging, the illustrations chosen often humorous counterpoints to the scandal at hand. The major point that comes through clear, is that, when the world moved from a primarily agrarian model to industrial, we lost touch with our ability to recognize food in its natural state and began to eat food processed, prepared, and created to make the most profit possible-even at a risk to the eater's health. Disturbing? Yes. You may find yourself reading the ingredient lists of your food with a more educated eye."—Sacramento Book Review

"[Wilson] pitches the reader into a brilliantly lit supermarket of stomach-turning information about the adulteration of basic foodstuffs. . . . Wilson zestfully reports on scandals, outcries, high-profile food corrupters, and crusaders (some themselves dealt in less detectable adulterants), recording the ever-lagging legislation that brought some safety to much of the basic food supply. . . . An impressive and important book."—Peter Skinner, Foreword Magazine

"What [Wilson] constructs is a tale of greed, chemical imbalance and, often, legislative failure in the food production and sale in Britain, the United States and, to a lesser extent, Canada."—Gordon Morash, The Globe and Mail

"As Wilson traces, with both precision and passion, the many changes wrought on the world of food over several centuries, a pattern seems to emerge: 'Improvements' often result in food of dubious if not dangerous qualities."—Jennifer Hewett, The American Interest

"Sweets used to get their colour from toxic lead, copper or mercury—this is just one of the shocking facts in Bee Wilson's lively history of food adulteration. Her story focuses on Britain and the USA, in which rapid industrialization and lack of government regulation have allowed free rein to 'food cheats'."—Katie Owen, Sunday Telegraph

"Wilson tells chronologically and admirably a continuing and bittersweet story."—Ross Leckie, The Times

"Swindled is unsettling with a good sense of humor."—Food Management

"In this engaging study, Wilson narrates the history of food adulteration in Britain and the US. According to the author, this history is essentially the account of an epic battle between the science of deception and the science of detection. . . . This volume will amply reward the growing number of readers concerned about both food authenticity and food safety."—D.M. Gilbert, Choice

"I recommend Swindled for undergraduate history courses on food, culture, or public policy, but it is worth noting that Wilson drops the historian's dispassionate analysis when discussing modern topics. Here her normative frame becomes clear (one I embrace as a citizen if not as a historian); she is a crusading reformer against today's 'adulterated' foods laden with additives, preservatives, vitamin and mineral supplements, flavorings, and sweeteners."—James A. Spiller, Journal of American History

"Bee Wilson is a terrific writer who tells great stories, and her book could not be more timely given what's going on in the Chinese food industry today."—Marion Nestle, author of Food Politics and What to Eat

"No other book tells the history of food adulteration in this way. Swindled is ambitious in its coverage and extremely well written."—Andrew F. Smith, editor of the Oxford Companion to American Food and Drink