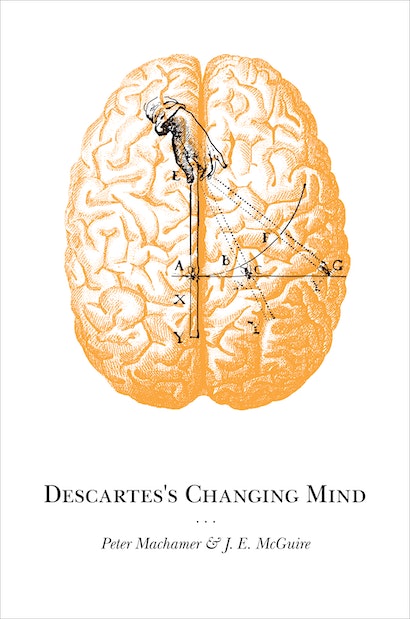 Descartes’s works are often treated as a unified, unchanging whole. But in Descartes’s Changing Mind, Peter Machamer and J. E. McGuire argue that the philosopher’s views, particularly in natural philosophy, actually change radically between his early and later works — and that any interpretation of Descartes must take account of these changes. The first comprehensive study of the most significant of these shifts, this book also provides a new picture of the development of Cartesian science, epistemology, and metaphysics.


No changes in Descartes’s thought are more significant than those that occur between the major works The World (1633) and Principles of Philosophy (1644). Often seen as two versions of the same natural philosophy, these works are in fact profoundly different, containing distinct conceptions of causality and epistemology. Machamer and McGuire trace the implications of these changes and others that follow from them, including Descartes’s rejection of the method of abstraction as a means of acquiring knowledge, his insistence on the infinitude of God’s power, and his claim that human knowledge is limited to that which enables us to grasp the workings of the world and develop scientific theories.

"Machamer and McGuire painstakingly trace the development of Descartes' views on the means and extent of human knowledge as it relates to science and metaphysics. Beginning with a conception of knowledge as based on abstraction from sensory experience and as capable of delivering truths about the simple natures of things in his early work, Descartes, they argue, radically changes his mind about the powers and scope of the mind, arriving finally at a conception that relies heavily upon innate ideas and a limitation of humans' cognitive reach to a world that is suitably framed to their natures as mind-body unities."—Choice

"Machamer and McGuire are thus to be congratulated for taking on the difficult task of providing a reading of Descartes's entire corpus, spanning over two decades and five completed works, that treats it as a dynamic progression, rather than a static system. In so doing, they pay careful attention to the historical chronology, the Scholastic background, Descartes's replies to his philosophical interlocutors, and the scholarship on issues central to Descartes's mature positions. The result is a rich and controversial story that always engages the reader even if it does not always convince."—Helen Hattab, Notre Dame Philosophical Reviews

"I believe that [Peter Machamer & J. E. McGuire] are to be commended for enabling us to take seriously the view that Descartes's opinions may have shifted in significant ways and for illustrating a different way to tell the story of the arc of Descartes's career."—Michael Della Rocca, Metascience

"Original and well-grounded in the texts, Descartes's Changing Mind offers a comprehensive interpretation of Cartesian science. It also tackles questions concerning our knowledge of the new world of Descartes's physics and the mind's relation to that world. Machamer and McGuire take into account Descartes's entire career, from the late 1620s to the time of the Principles, showing that on key issues he altered his views significantly."—Dennis Des Chene, Washington University in St. Louis

"This book's main argument—that Descartes's views on metaphysics and natural philosophy changed over time—is significant because Descartes rarely gives the impression that his views have changed and scholars often treat them as a single block. This is the first book to focus on Descartes's changing views, and it is welcome."—Roger Ariew, University of South Florida