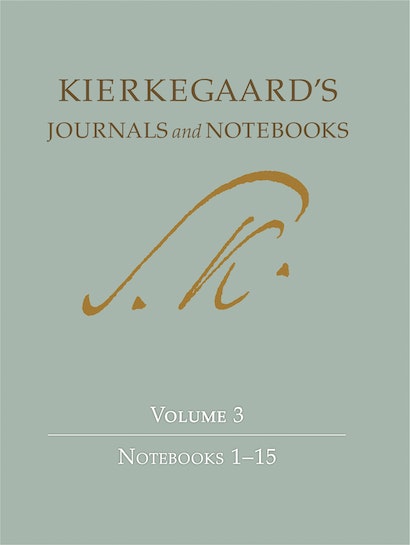 
Volume 3 of this 11-volume edition of Kierkegaard’s Journals and Notebooks includes Kierkegaard’s extensive notes on lectures by the Danish theologian H. N. Clausen and by the German philosopher Schelling, as well as a great many other entries on philosophical, theological, and literary topics. In addition, the volume includes many personal reflections by Kierkegaard, notably those in which he provides an account of his love affair with Regine Olsen, his onetime fiancée.

Bruce H. Kirmmse of Connecticut College is general editor and K. Brian Söderquist of the University of Copenhagen is associate general editor of Kierkegaard's Journals and Notebooks.

"[T]he new series Kierkegaard's Journals and Notebooks, which aims to become the standard English version of Kierkegaard's papers, journals, and notebooks . . . is certainly well positioned to achieve this goal. . . . [T]his volume is an excellent addition to an excellent series. It is a rich resource for English-language Kierkegaard scholars, and reason to look forward to future volumes with great anticipation."—Brian Gregor, Philosophy in Review

"The attention to detail in this work is at times astonishing. . . . As befits a library volume of this type, it is encyclopedic rather than analytic: the critical accounts are essentially summaries of content and context, rather than interpretative discussions."—Thomas Grimwood, European Legacy