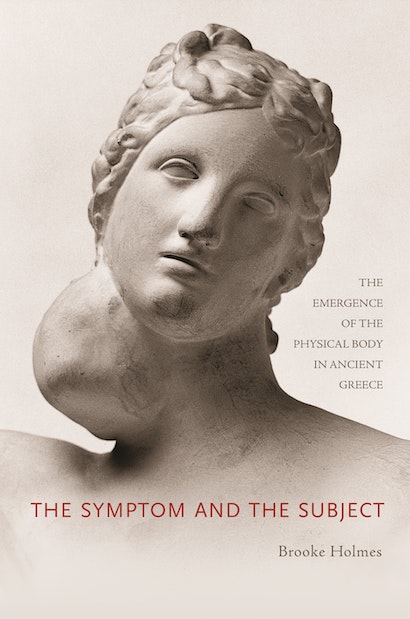 The Symptom and the Subject takes an in-depth look at how the physical body first emerged in the West as both an object of knowledge and a mysterious part of the self. Beginning with Homer, moving through classical-era medical treatises, and closing with studies of early ethical philosophy and Euripidean tragedy, this book rewrites the traditional story of the rise of body-soul dualism in ancient Greece. Brooke Holmes demonstrates that as the body (sôma) became a subject of physical inquiry, it decisively changed ancient Greek ideas about the meaning of suffering, the soul, and human nature.


By undertaking a new examination of biological and medical evidence from the sixth through fourth centuries BCE, Holmes argues that it was in large part through changing interpretations of symptoms that people began to perceive the physical body with the senses and the mind. Once attributed primarily to social agents like gods and daemons, symptoms began to be explained by physicians in terms of the physical substances hidden inside the person. Imagining a daemonic space inside the person but largely below the threshold of feeling, these physicians helped to radically transform what it meant for human beings to be vulnerable, and ushered in a new ethics centered on the responsibility of taking care of the self.

The Symptom and the Subject highlights with fresh importance how classical Greek discoveries made possible new and deeply influential ways of thinking about the human subject.

Brooke Holmes is assistant professor of classics at Princeton University.

"Brooke Holmes' volume is a wonderful read that would be enjoyed not only by scholars but also by people interested in the history of ideas in the Greek world. I also think that such a work must be a source for any future analysis of the concepts of person, soul, and body in Greek philosophy and literature."—Octavian Gabor, Bryn Mawr Classical Review

"This is not the type of book one can read in a single sitting; rather, it is a work one will want to study, reread, and revisit over a period of time. It will no doubt become a point of reference for anyone interested in the body in the ancient world."—Laurence Totelin, Isis

"This is a splendid book, deeply researched and meticulously executed; it is also compact, complex, and defiant of efforts to summarize."—Ann Ellis Hanson, New England Classical Journal

"The book is a remarkable example of scholarship, and ought to be welcomed by ancient philosophers, particularly those who work in moral psychology and embodiment."—Aaron James Landry, Philosophy in Review

"Holmes has written a wide-ranging and thorough book on the emergence of the concept of the body as a physical object in Ancient Greece. The primary and secondary sources consulted are extensive . . . making this work most useful for a scholar already knowledgeable in the body soul argument. The language used and the concepts raised make for intense reading at times, but this book provides a systematic analysis of the concept of the body, a frequently ignored part of a significant Greek belief: the body-soul dichotomy."—Miriam Bissett, Prudentia Offprint

"Holmes provides a timely new avenue for putting ancient medicine centrally on the map of classical Greek thought. . . . Specialists in ancient medicine should be glad to have such an articulate and intelligent advocate trying not only to bridge the gaps among subfields of Hellenic studies but making connections to Foucault and the 'mind-body problem' that we have inherited . . . from Plato and Descartes."—Susan H. Prince, Aestimatio

"[I]t is a richly argued and instructive work. . . . [I]ts value lies in its synthesis and breadth of the sources. The material Holmes has gathered, not only medical and philosophical, but also literary, backed by solid bibliographical reference throughout and presented through a thorough examination, is impressive, making the volume a stimulating read from a variety of perspectives."—Chiara Thumiger, Classical World

"The Symptom and the Subject is intellectually challenging, beautifully written, deeply thought out, and closely researched in primary and secondary materials. I found myself utterly engrossed by its arguments."—James I. Porter, University of California, Irvine

"Brilliant and important, this book tackles nothing less than the discovery of the body as a cultural and conceptual category in Greek antiquity. The book ranges over Homer and archaic poetry, the Sophists, philosophy, tragedy, and—most unusually and originally—the medical writings of the Hippocratic corpus, to construct a compelling account of historical developments."—Leslie Kurke, University of California, Berkeley