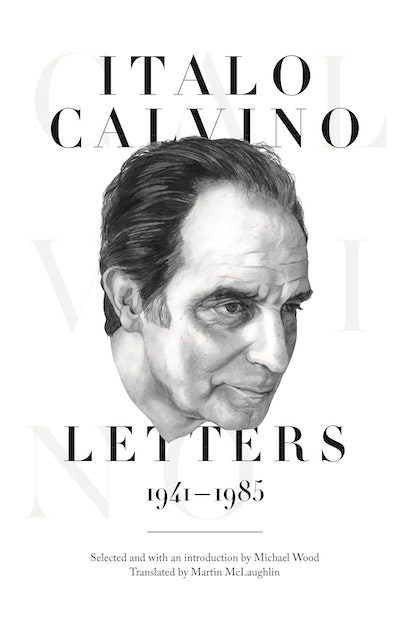 This is the first collection in English of the extraordinary letters of one of the great writers of the twentieth century. Italy’s most important postwar novelist, Italo Calvino (1923-1985) achieved worldwide fame with such books as Cosmicomics, Invisible Cities, and If on a Winter’s Night a Traveler. But he was also an influential literary critic, an important literary editor, and a masterful letter writer whose correspondents included Umberto Eco, Primo Levi, Gore Vidal, Leonardo Sciascia, Natalia Ginzburg, Michelangelo Antonioni, Pier Paolo Pasolini, and Luciano Berio. This book includes a generous selection of about 650 letters, written between World War II and the end of Calvino’s life. Selected and introduced by Michael Wood, the letters are expertly rendered into English and annotated by well-known Calvino translator Martin McLaughlin.

The letters are filled with insights about Calvino’s writing and that of others; about Italian, American, English, and French literature; about literary criticism and literature in general; and about culture and politics. The book also provides a kind of autobiography, documenting Calvino’s Communism and his resignation from the party in 1957, his eye-opening trip to the United States in 1959-60, his move to Paris (where he lived from 1967 to 1980), and his trip to his birthplace in Cuba (where he met Che Guevara). Some lengthy letters amount almost to critical essays, while one is an appropriately brief defense of brevity, and there is an even shorter, reassuring note to his parents written on a scrap of paper while he and his brother were in hiding during the antifascist Resistance.

This is a book that will fascinate and delight Calvino fans and anyone else interested in a remarkable portrait of a great writer at work.

Michael Wood is professor of English and comparative literature at Princeton University. His most recent books are Yeats and Violence and A Very Short Introduction to Film. Martin McLaughlin is the Agnelli-Serena Professor of Italian Studies at the University of Oxford. He is the translator of Calvino's Hermit in Paris: Autobiographical Writings, Into the War, and Why Read the Classics?, which won the John Florio Prize for translation. He is also cotranslator of Calvino's The Complete Cosmicomics.

"[C]onsistently absorbing and suggestive. . . . [T]he chronicle not only of Calvino's intellectual development but of postwar Italy's. . . . The letters in this book deal with great subtlety, sophistication, and wit, and occasionally even a certain cynicism, with challenges that might have overburdened a less mercurial, multifarious, essentially sane spirit."—Jonathan Galassi, New York Review of Books

"The image of Calvino as postmodernism's light-footed prince follows easily. But, behind that image, who was Calvino? The publication of a considerable selection of Calvino's letters affords an opportunity, or many opportunities, to ask that question anew."—Lawrence Norfolk, Wall Street Journal

"[T]here is no writer alive who resembles . . . Calvino. So the appearance of a selection of Calvino's letters in English is a moment of happiness. . . . [T]hese letters offer a gorgeous portrait of Calvino in the midst of his own productivity: as an editor, a reader, a critic, an inventor of new literary forms. And they allow the reader to investigate the complicated background from which those strange forms emerged."—Adam Thirlwell, New Republic

"This collection, the first in English, gives voice and witness to a vibrant mind intensely engaged in the literary and political future of postwar Italy and the history of ideas. . . . McLaughlin's translation is award-winning; the extensive notes provide a model of masterful research. Irresistible for Calvino readers."—Library Journal

"Italo Calvino's letters . . . provide . . . pleasure and surprise. . . . In them he shines as an editor of obvious brilliance and a writer of lavish gratitude towards those who appreciate his work."—Vivian Gornick, Prospect

"Superbly translated by Martin McLaughlin, these letters place Calvino in the larger frame of 20th century Italy and provide a showcase for his refined and civil voice. . . . Italo Calvino: Letters, 1941-1985 is a charming addition to the Planet Calvino—a place cluttered with sphinxes, chimeras, knights, spaceships and viscounts both cloven and whole."—Ian Thomson, Guardian

"[A]ltogether fantastic. . . . Italo Calvino: Letters, 1941-1985 is indispensable in its entirety, a treasure trove of timeless insight on literature and life."—Maria Popova, Brain Pickings

"The general reader will come away from the Letters admiring this skeptical, loyal, generous, industrious man, who gave the life of letters the dignity it so often seems to lack."—Adam Kirsch, Barnes and Noble Review

"It is impossible to overstate just how sublime and richly insightful Italo Calvino: Letters, 1941-1985 is in its entirety."—Maria Popova, Brain Pickings

"This selection of letter offers intellectual riches and access to the workings of a wholly original mind. The presentation of the book is exemplary, with copious, precise notes by Martin McLaughlin identifying not only the recipients of the letters but also the background to the topics under discussion. McLaughlin's translation is fluent and elegant throughout."—Joseph Farrell, The (Scotland) Herald

"As the letters chart Calvino's journey from postwar communist concerns with faithfulness to history to his destiny as an imaginative maestro more concerned with being faithful to the universe, the text both instructs and entertains."—Gregory Day, WA Today

"[I]t is provides a far greater insight into the life of Italo Calvino than an ordinary biography would have done."—Artswrap

"Michael Wood has made a studious selection of Calvino's letters and a provides an insightful introduction that frames his selection in the larger tableau of Calvino's life and work. Ample notes further clarify many of the personal and historical details as well as the Italian idioms that appear throughout these letters. It is a book worthy of both study and appreciation."—Stephan Delbos, BODY

"Selected and introduced by Michael Wood, translated by Martin McLaughlin, the collection is a mesmerizing peek inside the thinking of the great modern fabulist. . . . Much of [Calvino's] letter writing seems to be an exercise in clear expression. . . . He is a writer as scrupulous and demanding on himself as he is on the world around him. Calvino took the role of public intellectual very seriously, convinced in his job to explore the fringes of thought. . . . A writer of such great control and refreshing playfulness, Calvino reveals how serious and unsure his journey was in this collection of candid letters."—Seth Satterlee, PWxyz

"There is much to admire in McLaughlin's translation of the letters, not least his sensitivity to Calvino's variations of style and tone, from the ironic to the pedantic. The collection also provides new texts in English that provide valuable insights into the germination of Calvino's best-known works. It captures the writer's generosity and integrity and, above all, his deep and abiding passion for literary culture."—Rita Wilson, Sydney Review of Books

"Calvino liked to present an inscrutable face to the world, but this literally marvelous collection of letters shows him to have been gregarious, puckish, funny, combative, and, above all, wonderful company, and opens a new and fascinating perspective on one of the master writers of the twentieth century. Michael Wood and Martin McLaughlin have done Calvino, and us, a great and loving service."—John Banville, author of Ancient Light

"Italo Calvino was one of the most sparkling literary inventors and innovators of the twentieth century. He was also a highly astute mediator of the work of others and a pellucid purveyor of a subtly elaborated idea of literature. To have a generous selection of his letters in English, translated with great verve, represents a major addition to our knowledge of his work, offering countless precious glimpses of the gears and levers that operate the 'literature machine.'"—Robert S. C. Gordon, University of Cambridge

"These letters are invaluable. They are an important source for understanding the intellectual and historical context of Italo Calvino's writing and thought, and his relations with other writers. They are filled with irony and insights on a vast variety of interesting literary and cultural topics. And they are beautifully written—a literary achievement in themselves. This translation is a real achievement as well."—Lucia Re, University of California, Los Angeles

"This is an excellent translation."—Andrea Ciccarelli, Indiana University