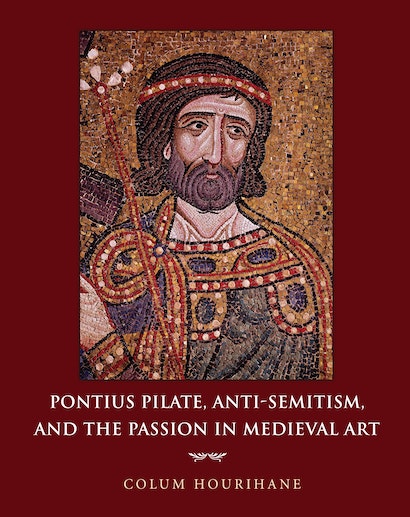 Pontius Pilate is one of the Bible’s best-known villains — but up until the tenth century, artistic imagery appears to have consistently portrayed him as a benevolent Christian and holy symbol of baptism. For the first time, Pontius Pilate, Anti-Semitism, and the Passion in Medieval Art provides a complete look at the shifting visual and textual representations of Pilate throughout early Christian and medieval art. Colum Hourihane examines neglected and sometimes sympathetic portrayals, and shows how negative characterizations of Pilate, which were developed for political and religious purposes, reveal the anti-Semitism of the medieval period.

Hourihane indicates that in some artistic renderings, Pilate may have been a symbol of good, and in many, a figure of jurisprudence. Eastern traditions treated Pilate as a saint with his own feast day, but Western accounts from the tenth century changed him from a Roman to a Jew. Pilate became a vessel for anti-Semitism — his image acquired grotesque facial and physical characteristics, and his role in Christ’s Passion grew to mythic proportions. By the fifteenth century, however, representations of Pilate came full circle to depict an aged and empathetic administrator.

Combining a wealth of previously unpublished sources with explorations of art historical developments, Pontius Pilate, Anti-Semitism, and the Passion in Medieval Art puts forth for the first time an encyclopedic portrait of a complex legend.

Colum Hourihane is director of the Index of Christian Art in the Department of Art and Archaeology at Princeton University. His books include Gothic Art in Ireland, 1169-1550 and The Processional Cross in Late Medieval England.

"I have to admit to being delighted by this latest offering from the director of the Index of Christian Art at Princeton. The path along which Colum Hourihane leads us is copiously illustrated . . . and accompanied by scrupulously detailed notes."—Christopher Colven, Art Newspaper

"The book . . . is splendidly produced and illustrated."—Choice

"Pontius Pilate, Anti-Semitism, and the Passion in Medieval Art is likely to stimulate discussion . . . for some time to come, so broad is its reach and bounteous its sources. It is a significant accomplishment to begin to bring order to this enormous mass of material; that Hourihane has also produced such a wide-ranging and beautifully illustrated volume is cause for considerable gratitude."—Sarah Lipton, Medieval Review

"There is much here to interest the art historian, the medievalist, the church historian, the researcher in the history of anti-Semitism, and the student of the development and transmission of myths and legends."—Sarah Lawson, Art Book

"Hourihane has given an admirable, thorough and balanced account of the representation of this enigmatic man, and his book is beautifully produced."—Paul Binski, Journal of Ecclesiastical History

"[T]his book is a multifaceted treatment of the iconography of Pontius Pilate and provides a useful compilation of textual and visual representations of his role in the Passion."—Vivian B. Mann, Speculuma Journal of Medieval Studies

"This textual and visual barometer of Pontius Pilate reveals a highly complex picture of a mysterious figure. The chronological span of the book is breathtaking."—Dorothy Verkerk, University of North Carolina, Chapel Hill

"The figure of Pilate has long fascinated the public. The book discusses the historical and traditional textual presentations of Pilate, and includes art from Christian antiquity through to the end of the Middle Ages. The scholarship is sound and extensive."—Robin M. Jensen, Vanderbilt University

"This is a major contribution to the growing examinations of anti-Jewish representations in medieval and early modern art and literature. The author's lively and engaging consideration of the sources, both pictorial and literary, is careful and thorough."—Debra Higgs Strickland, University of Glasgow