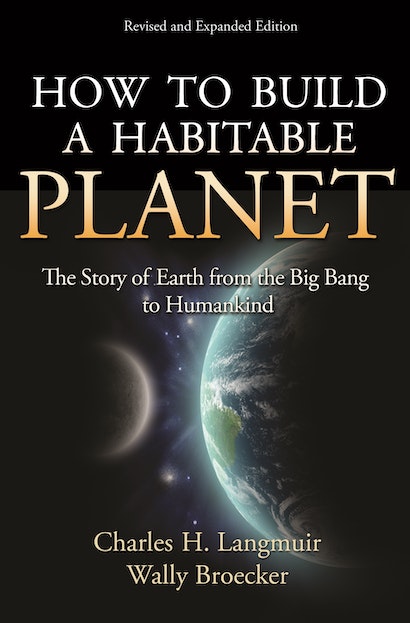 Since its first publication more than twenty-five years ago, How to Build a Habitable Planet has established a legendary reputation as an accessible yet scientifically impeccable introduction to the origin and evolution of Earth, from the Big Bang through the rise of human civilization. This classic account of how our habitable planet was assembled from the stuff of stars introduced readers to planetary, Earth, and climate science by way of a fascinating narrative. Now this great book has been made even better. Harvard geochemist Charles Langmuir has worked closely with the original author, Wally Broecker, one of the world’s leading Earth scientists, to revise and expand the book for a new generation of readers for whom active planetary stewardship is becoming imperative.

Interweaving physics, astronomy, chemistry, geology, and biology, this sweeping account tells Earth’s complete story, from the synthesis of chemical elements in stars, to the formation of the Solar System, to the evolution of a habitable climate on Earth, to the origin of life and humankind. The book also addresses the search for other habitable worlds in the Milky Way and contemplates whether Earth will remain habitable as our influence on global climate grows. It concludes by considering the ways in which humankind can sustain Earth’s habitability and perhaps even participate in further planetary evolution.

Like no other book, How to Build a Habitable Planet provides an understanding of Earth in its broadest context, as well as a greater appreciation of its possibly rare ability to sustain life over geologic time.

Leading schools that have ordered, recommended for reading, or adopted this book for course use:

Charles H. Langmuir is the Higgins Professor of Geochemistry at Harvard University. Wally Broecker is the Newberry Professor of Earth and Environmental Sciences at Columbia University and the author of Fixing Climate and The Great Ocean Conveyor (Princeton), among other books. Both are members of the National Academy of Sciences.

"[T]his classic history of our common home with the latest discoveries in planetary science . . . is a cutting-edge exploration of the Earth's evolution from the Big Bang to the advent of human civilization."—Barnes & Noble Review

"To be worth being this unwieldy, a book ought to do something pretty remarkable. And that's just what How to Build . . . does, as you can tell from its subtitle, The Story of Earth from the Big Bang to Humankind. Now that's what you call a large canvas."—Brian Clegg, Popular Science

"Like any good story, the tale that Langmuir and Broecker tell is a complex, weaving narrative that would be ideally placed on your bookcase between James Kasting's How to Find a Habitable Planet and Peter Ward and Donald Brownlee's Rare Earth. . . . As non-astronomers they cover the initial cosmological and astronomical sections adequately, but as the book develops towards explaining the processes that make Earth habitable, the authors' expertise really comes to the fore. . . . How to Build a Habitable Planet is Earth's story, but Langmuir and Broecker conclude with a nod to exoplanets and the search for alien life. Could it one day also become another planet's story?"—Astronomy Now

"The authors . . . have taken on a mighty task. You cannot underestimate the accuracy of their scholarship, or its thoroughness."—Heather Couper, BBC Sky at Night

"This is a completely different book, wholly updated but also more detailed and more comprehensive. Yet, it keeps the bright flavour of the old version, and remains accessible without compromising on accuracy. . . . How to Build a Habitable Planet is an accurate and enjoyable read."—Euan G. Nisbet, Nature Geoscience

"Enormous advances have been made in the Earth sciences in the years since the original volume appeared. In addition, climate change has become a much more urgent topic. The revised version aims to bring the science up to date and to give a current environmental perspective. In this undertaking, Broecker has been joined by Langmuir, who now becomes first author. Their approach of providing each chapter with a clear introduction and summary will help greatly in accommodating the lay reader. . . . We can be grateful to the authors that they had the initiative and energy to undertake a scientific synthesis of such broad scope. . . . All who are concerned with the global environment and who wish to be scientifically well-informed in relation to it will find the book a worthwhile and inspirational challenge."—Ray Bates, Irish Times

"[Langmuir and Broecker] strike a nice balance with roughly an equal number of chapters devoted to life, earth, and extraterrestrial processes. . . . What makes it work is the authors' admirable job of focusing tightly on how the many processes they outline feed into life's makeup or systems needed to support it."—Choice

"Although this 718 page book is over twice as long compared to the first edition, it is still a comfortable read both for earth scientists as well as nonspecialists. The diverse topics dealt with have been skillfully stitched together and each chapter provides lucid descriptions, logical discussions and a nice summary. This book could be an useful text for undergraduate students in earth sciences and with necessary supplements, could also be used for advanced courses in earth sciences."—Ramananda Chakrabarti, Current Science

"I would recommend this book to anyone looking for a well-informed exploration of the theories behind building a habitable planet. Although complex in some places, it is still accessible to many and is overall a very useful addition to any astrobiologist's library."—Samantha Rolfe, Astrobiology Society of GB

"This classic account of how our habitable planet was assembled from the stuff of stars introduced readers to planetary, Earth, and climate science by way of a fascinating narrative. Now it has been made even better."—Lunar and Planetary Information Bulletin

"Generally speaking, the book by Langmuir & Broecker is very reader friendly. . . . It can become an essential reading for both beginners and professionals in geology, palaeontology, and other natural sciences. Geoscience educators will also praise it. . . . This book is a very good addition to the conventional textbooks on general geology, and it can be recommended for students as advanced reading."—Dmitry A. Ruban, Palaontologie Allgemein

"In this comprehensive and engaging tour of environmental science, world-leading authorities Charles Langmuir and Wally Broecker provide the residents of the only habitable planet we know with the essential knowledge of how we got here and where we might be going."—Richard Alley, Pennsylvania State University

"As NASA continues to assess the habitability of our planetary neighbor, Mars, this insightful and approachable book is a timely reminder of how important it is to understand the habitability of our own Earth. Comprehensive and up-to-date, it exposes how ideas, imperfect understanding, and controversies drive scientific knowledge forward."—Roger Everett Summons, Massachusetts Institute of Technology

"This is a magnificent book, a successful and very worthwhile revision of its legendary and coveted first edition. The new edition offers more than a minor dusting off of the material. There are some completely new chapters and the authors have also done a good job of introducing newer discoveries. This book is more timely than ever, and I greet this revision with uncontained enthusiasm."—Raymond T. Pierrehumbert, University of Chicago

"This book is exceptionally well written and easy to read. The authors have taken a huge and complex topic and simplified it, removed the jargon, used analogies common to everyday experience, and as a result made a book that should be accessible and enjoyable to readers with little background in science."—Becky Alexander, University of Washington

Supporting materials for teaching and self learning that include a course syllabus, lecture slides, and book figures, see: https://www.habitableplanet.org