A major new history of classical Greece—how it rose, how it fell, and what we can learn from it 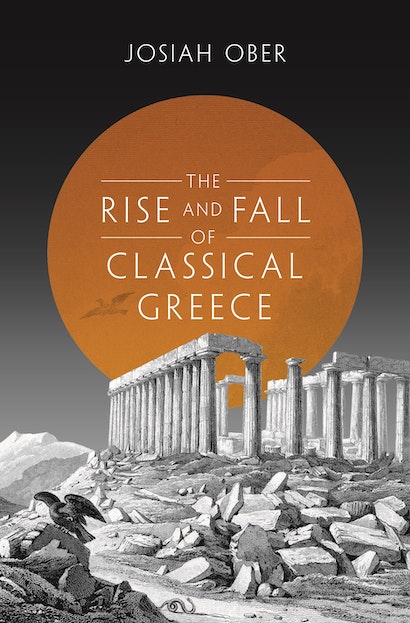 Lord Byron described Greece as great, fallen, and immortal, a characterization more apt than he knew. Through most of its long history, Greece was poor. But in the classical era, Greece was densely populated and highly urbanized. Many surprisingly healthy Greeks lived in remarkably big houses and worked for high wages at specialized occupations. Middle-class spending drove sustained economic growth and classical wealth produced a stunning cultural efflorescence lasting hundreds of years.

Why did Greece reach such heights in the classical period—and why only then? And how, after “the Greek miracle” had endured for centuries, did the Macedonians defeat the Greeks, seemingly bringing an end to their glory? Drawing on a massive body of newly available data and employing novel approaches to evidence, Josiah Ober offers a major new history of classical Greece and an unprecedented account of its rise and fall.

Ober argues that Greece’s rise was no miracle but rather the result of political breakthroughs and economic development. The extraordinary emergence of citizen-centered city-states transformed Greece into a society that defeated the mighty Persian Empire. Yet Philip and Alexander of Macedon were able to beat the Greeks in the Battle of Chaeronea in 338 BCE, a victory made possible by the Macedonians’ appropriation of Greek innovations. After Alexander’s death, battle-hardened warlords fought ruthlessly over the remnants of his empire. But Greek cities remained populous and wealthy, their economy and culture surviving to be passed on to the Romans—and to us.

A compelling narrative filled with uncanny modern parallels, this is a book for anyone interested in how great civilizations are born and die.

This book is based on evidence available on a new interactive website. To learn more, please visit: http://polis.stanford.edu/.

"In the late fourth century B.C., Aristotle and his students collected the constitutions of more than 150 […] city-states. The scholar who would today follow in Aristotle's footsteps has to deal with a far more formidable mass of data. Few of today's scholars control more of this data, or write about it more insightfully, than Josiah Ober. [T]hose willing to put in the effort will learn much from the deep meditations of an expert historian and political philosopher."—James Romm, Wall Street Journal

"[T]his could turn out to be Gibbon's Decline and Fall of the Roman Empire for classical Greece."—Jonathan Sturgeon, Flavorwire

"Ober marshals a wealth of new data to make the case for a much different view of Greek history . . . there was something distinct about the Greek world, he argues. What set the Greeks apart, he says, was their choice of a particular kind of order—and the cultural attitudes that went with it. Citizen self-government. Equality of standing among persons. Fair and open institutions. These ideas, unusual in history, were well developed in the Greek world, Ober notes. If we care about them, he says, we should pay attention."—Marc Parry, Chronicle of Higher Education

"[Ober¹s] central argument is that the achievements of Greek civilization were rooted in its prosperity, and that was the result of a rough economic and political equality. . . . [He] ranges over a half millennium of Greek history, from the 8th to the 3rd centuries BCE, seeking the roots of Greek "efflorescence"—its material and cultural flourishing. . . . [The Rise and Fall of Classical Greece] is rife with parallels to the present."—Brian Bethune, Macleans

"An attractive, informative, and timely picture of Greece from Homer to Aristotle. . . . It's an absorbing story full of excitement, drama and hope."—Evaggelos Valiantos, Huffington Post

"[The Rise and Fall of Classical Greece] is by far [Ober's] most ambitious work to date, a magisterial tour of the successes and failures of various city-states throughout the Greek world from the archaic through the Hellenistic periods. . . . The thrust of the book is not just provocative but persuasive.""—Adriaan Lanni, The New Rambler

"This book is a groundbreaking examination of what Ober (political science, Stanford) calls the ‘efflorescence' of ancient Greece, which, divided into some 1,100 city-states as it was, developed a unified, dominant culture."—Choice

"His narrative history of Greek efflorescence is engaging and full of insights."—Richard Seaford, Literary Review

"A thought-provoking book with great depth. As the great political theorists of the modern era have always known, the ancient Greek experience provides immense empirical material to mine for insights into political science: how we design rules of politics to secure human freedom and well-being. We ignore the experience of classical civilization to our own disadvantage."—Jason Sorens, The American Conservative

"This challenging book is like no other history of the ancient world. . . . [Ober] produces some engaging and striking analyses of familiar historical episodes."—American Historical Review

"Intriguing. . . . [Y]ou can think of this book as how an economist might think about ancient Greece."—Tyler Cowen, Marginal Revolution

"[Ober's] work will be of interest to anyone who is serious about the history of political economy, or who wants to know more about the relationship between democracy, economic growth, and human flourishing, whether in the ancient or modern world. . . . The Rise and Fall of Classical Greece . . . will richly reward a serious lay reader. One of its most appealing qualities is its multidisciplinary approach, which is the fruit of Ober's extensive and generously acknowledged collaboration with scholars from around the world as well as with his Stanford colleagues in a number of fields, including the sciences. In this respect, it points in a direction that future humanities scholars will need to go if they, too, wish to flourish."—David Wharton, Weekly Standard

"A fresh and vigorous account about the roots of democracy."—Brian A. Pavlac, Canadian Journal of History

"In this exemplary book, Josiah Ober, one of the foremost international authorities on ancient Greek political, economic, and intellectual history, persuasively explains why and how ancient Greek communities and individuals managed—and sometimes failed—to flourish culturally and materially."—Paul Cartledge, author of The Spartans: The World of the Warrior-Heroes of Ancient Greece

"This is a groundbreaking book on the ancient world. Displaying the narrative skill of a master historian, The Rise and Fall of Classical Greece is must reading."—Barry Strauss, author of The Death of Caesar: The Story of History's Greatest Assassination

"Remarkable. . . . [The Rise and Fall of Classical Greece] deserves a very broad readership in political science across subfields. It brings Greek antiquity into the 21st century."—S. Sara Monoson, Perspectives on Politics

"An astonishing work. If you want to know what the fuss is about the ancient Greeks, this is the book to start with."—John Ma, University of Oxford

"This excellent book presents a wealth of new evidence on the economic performance of ancient Greece, and how that performance was linked to democratic institutions. The data that Ober presents are truly extraordinary. Moreover, the main story is well presented, well argued, and thoroughly enjoyable to read."—Robert Fleck, Clemson University