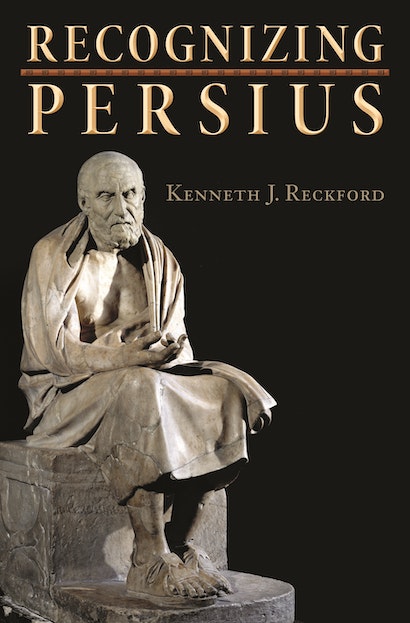 Recognizing Persius is a passionate and in-depth exploration of the libellus — or little book — of six Latin satires left by the Roman satirical writer Persius when he died in AD 62 at the age of twenty-seven. In this comprehensive and reflectively personal book, Kenneth Reckford fleshes out the primary importance of this mysterious and idiosyncratic writer. Reckford emphasizes the dramatic power and excitement of Persius’s satires — works that normally would have been recited before a reclining, feasting audience. In highlighting the satires’ remarkable honesty, Reckford shows how Persius converted Roman satire into a vehicle of self-exploration and self-challenge that remains relevant to readers today.


The book explores the foundations of Roman satire as a performance genre: from the dinner-party recitals of Lucilius, the founder of the genre, through Horace, to Persius’s more intense and inward dramatic monologues. Reckford argues that despite satire’s significant public function, Persius wrote his pieces first and mainly for himself. Reckford also provides the context for Persius’s life and work: his social responsibilities as a landowner; the interplay between his life, his Stoic philosophy, and his art; and finally, his incomplete struggle to become an honest and decent human being. Bringing the modern reader to a closer and more nuanced acquaintance with Persius’s work, Recognizing Persius reinstates him to the ranks of the first-rate satirists, alongside Horace and Juvenal.

Kenneth J. Reckford is the Kenan Professor Emeritus of Greek and Latin in the Department of Classics at the University of North Carolina, Chapel Hill. His books include Aristophanes' Old-And-New Comedy.

"The book retains the informal approach of the original lectures, a shrewd choice since Reckford excels at using the public speaker's panoply to bring his subject to life; by book's end, readers will fell that they not only know Persius better but also understand more deeply his struggle, as a person and as an author, against humanity's foibles and follies."—Choice

"Reckford takes his reader through a well-structured overview of the genre, which I believe will be particularly helpful to students just encountering Roman Satire. Because of the scope of this book, therefore, I would strongly recommend it as an introduction not only to Persius but also to the entire genre, for it places Lucilius, Horace, and to some extent Juvenal, in a context that is often elusive, largely because of the very nature of satire."—Patricia A. Johnston, Bryn Mawr Classical Review

"With effortless execution, Reckford draws the reader gently and persuasively into the remote world of this brilliant, young Roman satirist. This is a warm, deeply thoughtful, and perceptive book."—Dan Hooley, University of Missouri

"English language books focusing on Persius are few and far between. Reckford is well-versed in ancient satire and his close analyses of particular words, lines, and passages are often compelling."—Cedric Littlewood, University of Victoria