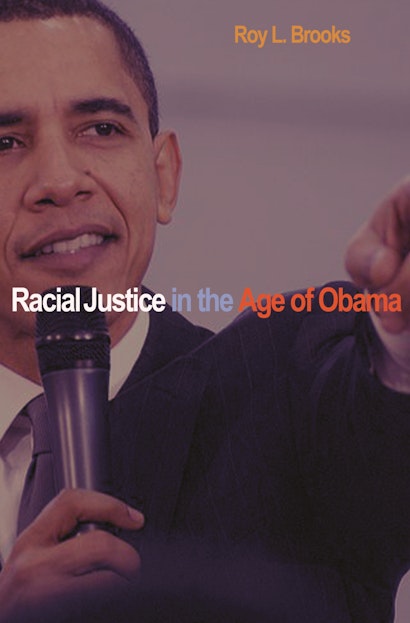 With the election of Barack Obama as the first black president of the United States, the issue of racial justice in America occupies center stage. Have black Americans finally achieved racial justice? Is government intervention no longer required? Racial Justice in the Age of Obama considers contemporary civil rights questions and theories, and offers fresh insights and effective remedies for race issues in America today.

While there are now unprecedented opportunities for talented African Americans, Roy Brooks shows that lingering deficiencies remain within the black community. Exploring solutions to these social ills, Brooks identifies competing civil rights theories and perspectives, organizing them into four distinct categories—traditionalism, reformism, limited separation, and critical race theory. After examining each approach, Brooks constructs the best civil rights theory for the Obama phase of the post–civil rights era. Brooks supports his theoretical model with strong statistics that break down the major racial groups along such demographics as income and education. He factors in the cultural and structural explanations for the nation’s racial divisions, and he addresses affirmative action, the failures of integration, the negative aspects of black urban culture, and the black community’s limited access to resources. The book focuses on African Americans, but its lessons are relevant for other groups, including Latinos, Asians, women, and gays and lesbians.

Racial Justice in the Age of Obama maps out today’s civil rights questions so that all groups can achieve equality at a time of unprecedented historical change.

Roy L. Brooks is Warren Distinguished Professor of Law at the University of San Diego. His many books include Atonement and Forgiveness: A New Model for Black Reparations and Integration or Separation?: A Strategy for Racial Equality.

"Racial Justice in the Age of Obama provides an excellent, balanced summary, critique, and synthesis of the central approaches to racial justice as well as creative proposals—which are informed by each of the four approaches—for alleviating the internal and external problems that sustain the disparate resources between whites and blacks in the US. Brooks' book would fit well in courses on race and civil rights in political science, sociology, and African American Studies at the undergraduate and graduate level as well as in related law school seminars."—Daniel N. Lipson, Law and Politics Book Review

"Brooks's book . . . contributes mightily to the ongoing discussions and debates about what such a theory should look like."—Andrew Valls, Political Science Quarterly

"This book is powerful, thorough, and compelling. In Brooks's critique of liberals and conservatives, there are no sacred cows—he uses data and analysis to respond to what he views as shortsighted and ill-conceived ideas about a post-racial America. This book, like Obama's election, is an eye-opener. It will encourage and require debate and difficult discussions on the issue of race in the twenty-first century, and is a powerful indictment of our continuing problems of racial disparity. I recommend it to anyone serious about understanding both the depths of our problems and commitment to solving them. It is a must-read."—Charles J. Ogletree, Jr., executive director of the Charles Hamilton Houston Institute for Race and Justice

"Brooks captures all the nuances of the causes and effects of racial disparities in the United States. The book is neither too broad nor too narrow, and strikes a sensible, coherent balance that fills a void in race-related texts. Examining issues of diversity, it adds another exciting dimension to the discussion about the world that we live in and what we aspire to as a nation."—Robin Barnes, University of Connecticut School of Law

"This excellent book will command the attention of a significant legal audience as well as other intellectuals interested in the race question. Well-researched and well-written, it will revise how the debate on race is addressed."—Alex Johnson, University of Virginia School of Law