Unraveling the mystery of the catastrophic age of extinctions 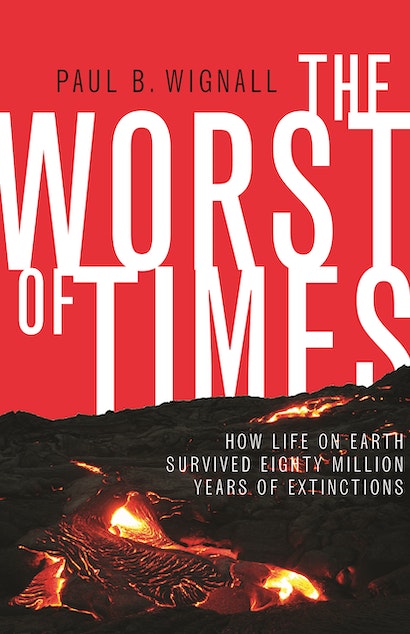 Two hundred sixty million years ago, life on Earth suffered wave after wave of cataclysmic extinctions, with the worst wiping out nearly every species on the planet. The Worst of Times delves into the mystery behind these extinctions and sheds light on the fateful role the primeval supercontinent, known as Pangea, might have played in causing these global catastrophes. Drawing on the latest discoveries as well as his own firsthand experiences conducting field expeditions to remote corners of the world, Paul Wignall reveals what scientists are only now beginning to understand about the most prolonged and calamitous period of environmental crisis in Earth’s history. Wignall shows how these series of unprecedented extinction events swept across the planet, killing life on a scale more devastating than the dinosaur extinctions that would follow. The Worst of Times unravels one of the great enigmas of ancient Earth and shows how this ushered in a new age of vibrant and more resilient life on our planet.

Paul B. Wignall is professor of paleoenvironments at the University of Leeds.

"[Wignall] presents a sound examination of an 80-million-year span, which began nearly 260 million years ago, that is considered by scientists to have been the most extreme extinction event in Earth's history. . . . [A] great example of scientific sleuthing."—Publishers Weekly

"[An] excellent introduction to the latest thinking about this key period in Earth's history. . . . Wignall's book is enthralling."—Matthew Cobb, New Scientist

"In this scholarly but accessible analysis, geologist Wignall explores the perfect storm of cataclysms, plate tectonics and other forces that led to ‘The Great Dying'—and the rebound of life in its aftermath."—Gemma Tarlach, Discover magazine

"Over the 170-odd pages [Wignall] discusses in great yet concise detail the point and counterpoint of large igneous provinces, massiv accumulations of millions of cubic kilometers of igneous rock, and mass extinctions that occurred repetitively and in synchrony from the middle of the Permian to the middle of the Jurassic. . . . A well-researched, thorough, and stimulating volume for anyone looking for a scientific account of this time period and the notable geological and biological events that took place over its course."—William Gearty, Quarterly Review of Biology

"We often think of extraterrestrial impacts, such as the one that killed off the dinosaurs, as the primary cause of mass extinction. But in this elegantly written book, Paul Wignall cites large volcanic eruptions as the most likely cause of several earlier mass extinctions, and offers a cogent analysis of why, since the Jurassic, such eruptions have posed less of a threat to life on Earth."—David J. Bottjer, University of Southern California

[An] excellent introduction to the latest thinking about this key period in Earth's history. . . . Wignall's book is enthralling.—New Scientist

"Wignall does a wonderful job of describing the mass extinctions from the Middle Permian through the Jurassic. His personal contributions to this field have been influential, and it is great fun to read about the subject through his eyes and the experiences of his research team. I really enjoyed this informative and entertaining book."—Jonathan Payne, Stanford University

"Wignall covers everything from volcanic eruptions and the carbon cycle to climate reconstruction and the possible role the Pangea supercontinent may have played in these devastating events. This is a story well told."—Michael J. Benton, author ofThe History of Life: A Very Short Introduction