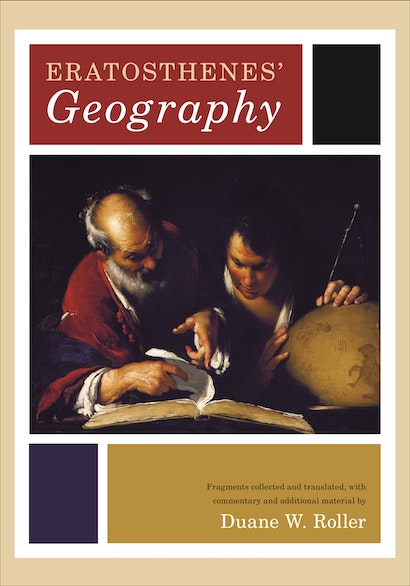 This is the first modern edition and first English translation of one of the earliest and most important works in the history of geography, the third-century Geographika of Eratosthenes. In this work, which for the first time described the geography of the entire inhabited world as it was then known, Eratosthenes of Kyrene (ca. 285-205 BC) invented the discipline of geography as we understand it. A polymath who served as librarian at Alexandria and tutor to the future King Ptolemy IV, Eratosthenes created the terminology of geography, probably including the word geographia itself. Building on his previous work, in which he determined the size and shape of the earth, Eratosthenes in the Geographika created a grid of parallels and meridians that linked together every place in the world: for the first time one could figure out the relationship and distance between remote localities, such as northwest Africa and the Caspian Sea. The Geographika also identified some four hundred places, more than ever before, from Thoule (probably Iceland) to Taprobane (Sri Lanka), and from well down the coast of Africa to Central Asia.


This is the first collation of the more than 150 fragments of the Geographika in more than a century. Each fragment is accompanied by an English translation, a summary, and commentary. Duane W. Roller provides a rich background, including a history of the text and its reception, a biography of Eratosthenes, and a comprehensive account of ancient Greek geographical thought and of Eratosthenes’ pioneering contribution to it. This edition also includes maps that show all of the known places named in the Geographika, appendixes, a bibliography, and indexes.

Duane W. Roller is professor emeritus of Greek and Latin at Ohio State University. He is the author of, among other books, Through the Pillars of Herakles: Greco-Roman Exploration of the Atlantic.

"[T]his is the sort of tribute that has been long overdue to one of the ancient Greek world's most original, penetrating and ecumenically humane geniuses."—Paul Cartledge, Anglo-Hellenic Review

"Roller has succeeded admirably in producing a work that will make Eratosthenes accessible to a wide variety of readers. He has made vast improvements over the previous editions of the fragments in facilitating the reading of both text and commentary. . . . This book will be equally interesting to specialist researchers."—Courtney Roby, Hague Journal of Diplomacy

"One does not have to be a trained classicist to appreciate Roller's scholarship. Indeed, the subjects he tackles are increasingly ones that resonate with the educated public as much as with specialists. Roller's new book follows this trend and will surely win new fans for its subject."—Sarah Pothecary, Strabo.ca

"In addition to a careful and justified assignation of fragments to the three books of Eratosthenes' Geographika, Roller in his commentary is very alert to the extent to which Strabo misrepresents or misunderstands the purpose of Eratosthenes. . . . The commentary is accessible and well conceived."—Hugh Lindsay, European Legacy

"This edition fills a real gap, long recognized by classicists, not to mention historians of geography, cartography, and ancient science. With its close attention to detail and its completeness, it will be of unquestionable value to classicists of many different stripes. Duane W. Roller has done a huge service to the field."—Grant Parker, Stanford University

"This edition is an extremely useful introduction to Eratosthenes and his work. The book is well conceived, well researched, and well executed, and it will benefit a wide range of scholars."—James Romm, Bard College