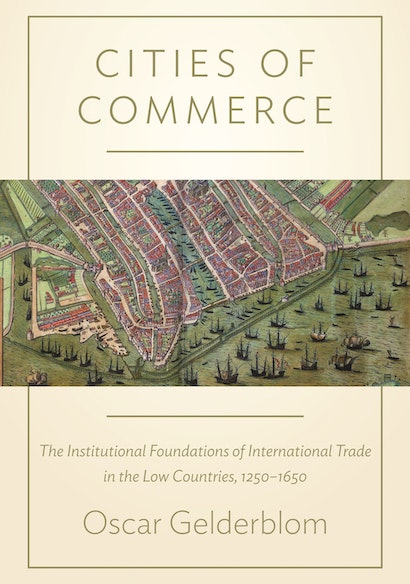 Cities of Commerce develops a model of institutional change in European commerce based on urban rivalry. Cities continuously competed with each other by adapting commercial, legal, and financial institutions to the evolving needs of merchants. Oscar Gelderblom traces the successive rise of Bruges, Antwerp, and Amsterdam to commercial primacy between 1250 and 1650, showing how dominant cities feared being displaced by challengers while lesser cities sought to keep up by cultivating policies favorable to trade. He argues that it was this competitive urban network that promoted open-access institutions in the Low Countries, and emphasizes the central role played by the urban power holders — the magistrates — in fostering these inclusive institutional arrangements. Gelderblom describes how the city fathers resisted the predatory or reckless actions of their territorial rulers, and how their nonrestrictive approach to commercial life succeeded in attracting merchants from all over Europe.

Cities of Commerce intervenes in an important debate on the growth of trade in Europe before the Industrial Revolution. Challenging influential theories that attribute this commercial expansion to the political strength of merchants, this book demonstrates how urban rivalry fostered the creation of open-access institutions in international trade.

Oscar Gelderblom is associate professor of economic history at Utrecht University. He is the editor of The Political Economy of the Dutch Republic.

"[A] rich, nuanced, and convincing account of how adaptively efficient commercial institutions emerged from interactions between merchants and city officials in early modern Europe."—Choice

"In this fine book, we get a real sense of the riskiness associated with trade . . . And of the efforts urban authorities made to cope with risk."—Paul M Hohenberg, EH.Net

"Gelderblom's Cities of Commerce, a work informed by both history and economic theory, should evoke both discussion and further work about the origins of the Western European economy."—James M. Murray, Journal of Interdisciplinary History

"What the book does in an exemplary and quite fruitful fashion is to sketch the commercial history of three of Europe's most important entrepots, analyzing the changing patterns of trade and institutional drift, assuming some sort of functional relationship between the two. . . . The book will be a welcome addition to recent debates in growth and development studies."—Journal of Economic Literature

"Gelderblom's study is a thought-provoking read and a well-modulated, original voice in the debate on the economic, urban and institutional development of pre-modern Europe."—Justyna Wubs-Mrozewicz, English Historical Review

"Gelderblom offers a convincing argument in this well-written book."—Donald ]. Harreld, The Historian

"His book thus contributes significantly to this on-going debate on state formation, economic growth and the institutional competition between cities."—Jelle Haemers, European Legacy

"This richly detailed book offers an important and critical reexamination of the commercial revolution in Northern Europe. Combining key insights from law and institutional economics with a sharp historical narrative, Gelderblom produces a striking new understanding of how formal and informal institutions propelled the European economy forward."—Jean-Laurent Rosenthal, California Institute of Technology

"Cities of Commerce is a major contribution to the debate about the role of institutional change in facilitating growth and commercial expansion. Few writers before Gelderblom have attempted to discuss the problem of commercial dislocation over such a long period."—David Ormrod, University of Kent

"Illuminating. This book advances the argument that intercity competition over long-distance trade in premodern Europe took the form of legal changes favorable to commerce. This important argument provides new insight into European history and the institutional foundations of the rise of the West. Gelderblom is a first-rate scholar."—Avner Greif, Stanford University

"Cities of Commerce is vigorously argued, well documented, and clearly presented. It will be a much read and debated contribution to a very active field of inquiry in economic history."—Jan deVries, University of California, Berkeley