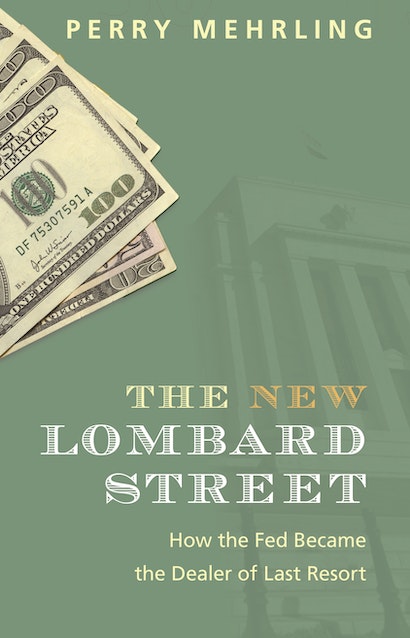 Walter Bagehot’s Lombard Street, published in 1873 in the wake of a devastating London bank collapse, explained in clear and straightforward terms why central banks must serve as the lender of last resort to ensure liquidity in a faltering credit system. Bagehot’s book set down the principles that helped define the role of modern central banks, particularly in times of crisis — but the recent global financial meltdown has posed unforeseen challenges. The New Lombard Street lays out the innovative principles needed to address the instability of today’s markets and to rebuild our financial system.


Revealing how we arrived at the current crisis, Perry Mehrling traces the evolution of ideas and institutions in the American banking system since the establishment of the Federal Reserve in 1913. He explains how the Fed took classic central banking wisdom from Britain and Europe and adapted it to America’s unique and considerably more volatile financial conditions. Mehrling demonstrates how the Fed increasingly found itself serving as the dealer of last resort to ensure the liquidity of securities markets — most dramatically amid the recent financial crisis. Now, as fallout from the crisis forces the Fed to adapt in unprecedented ways, new principles are needed to guide it. In The New Lombard Street, Mehrling persuasively argues for a return to the classic central bankers’ “money view,” which looks to the money market to assess risk and restore faith in our financial system.

Perry Mehrling is professor of economics at Barnard College, Columbia University. He is the author of Fischer Black and the Revolutionary Idea of Finance and The Money Interest and the Public Interest: American Monetary Thought, 1920-1970.

"A well-written, scholarly dissection that should be required reading for all graduate courses (and perhaps some advanced undergraduate) in macroeconomics or monetary economics."—Choice

"With lucid precision, Mehrling traces the history of how Fed policy makers became biased toward 'excessive elasticity'. . . . Mehrling saves the best for the end, where he describes the Fed's battle to save the system with an alphabet soup of lending programs."—James Pressley, Bloomberg News

"I continue to ponder Mehrling's main claims, but in any case this is an important book about the new Fed."—Tyler Cowen, Marginal Revolution

"In The New Lombard Street, Perry Mehrling . . . provides a lucid account of how the system worked when it was working—and of the growing role assumed by the Fed in an era of global economic volatility and 'credit-fueled bubbles.'"—Glenn C. Altschuler, Tulsa World

"[I]mportant. . . . Mehrling's new book tries to do just what Bagehot did: to give an account both of how and why the Fed acted when it reinvented the rules in the middle of a financial crisis, and of what the implications for future monetary policy will be."—Harold James, Central Banking Journal

"This is an excellent and accessible analysis for anyone wishing to understand the origins of the financial crisis and how the Fed came to respond as it did."—Larry Hatheway, Business Economist

"[T]he book can be read as an important contribution in the ongoing debate on the future of central banks. In terms of monetary policy thinking, this book is another contribution to the increasing awareness that central banks, perhaps lured by seeming success of inflation targeting, in the years before 2008 did not manage to strike the right balance between monetary and financial stability."—Lars Fredrik Øksendal, Enterprise & Society

"The global financial system is badly broken. Many institutions and individuals share responsibility for the development of pathologies in and around our largest banks, but the buck stops, literally and figuratively, with the Federal Reserve. If you would like to understand how this happened—and how we (and the Fed) might inch back from the precipice—read this book."—Simon Johnson, coauthor of 13 Bankers: The Wall Street Takeover and the Next Financial Meltdown

"Informed by history, a model of clear thought and lucid prose, The New Lombard Street is by far our best guidebook to the changed structure of financial markets and the new role of the Federal Reserve. It also charts a new path for monetary policymakers and—given the scale of the crisis—not a minute too soon."—James K. Galbraith, author of The Predator State: How Conservatives Abandoned the Free Market and Why Liberals Should Too

"In Lombard Street, Walter Bagehot laid out the financial market lore and central banking wisdom of his day—the 1870s. Today's markets are different, and so is what constitutes useful policy. In The New Lombard Street, Perry Mehrling blends his rich historical knowledge with an acute analysis of current-day markets to suggest what constitutes sound central banking and financial regulation for our time. The result merits close attention from policymakers, and the rest of us too."—Benjamin M. Friedman, author of The Moral Consequences of Economic Growth

"No one else has come close to the achievement of this book in relating the crisis to the prior history of monetary thought and central bank practice. A masterful, original, and beautifully constructed work."—Charles A. E. Goodhart, London School of Economics and Political Science

"The New Lombard Street makes a serious and successful effort to deepen our understanding not just of the last century or more of U.S. monetary history, but also of the way in which economic analysis has evolved alongside that history. I very much enjoyed reading this book. It is timely, provocative, and well written."—David Laidler, professor emeritus, University of Western Ontario

"This is a wonderful book that offers a fresh understanding of the role of the central bank in the world of modern finance."—Roger E. Backhouse, University of Birmingham