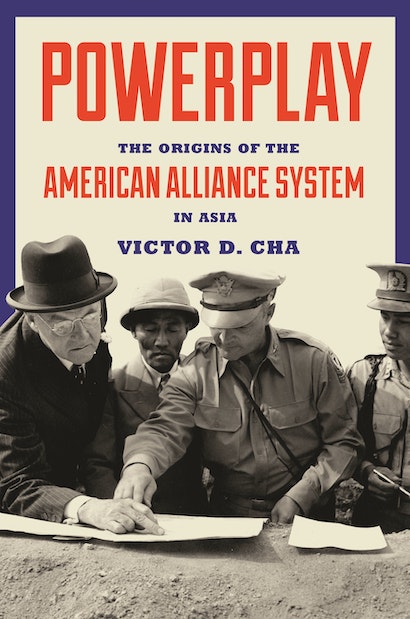 While the American alliance system in Asia has been fundamental to the region’s security and prosperity for seven decades, today it encounters challenges from the growth of China-based regional organizations. How was the American alliance system originally established in Asia, and is it currently under threat? How are competing security designs being influenced by the United States and China? In Powerplay, Victor Cha draws from theories about alliances, unipolarity, and regime complexity to examine the evolution of the U.S. alliance system and the reasons for its continued importance in Asia and the world.

Cha delves into the fears, motivations, and aspirations of the Truman and Eisenhower presidencies as they contemplated alliances with the Republic of China, Republic of Korea, and Japan at the outset of the Cold War. Their choice of a bilateral “hub and spokes” security design for Asia was entirely different from the system created in Europe, but it was essential for its time. Cha argues that the alliance system’s innovations in the twenty-first century contribute to its resiliency in the face of China’s increasing prominence, and that the task for the world is not to choose between American and Chinese institutions, but to maximize stability and economic progress amid Asia’s increasingly complex political landscape.

Exploring U.S. bilateral relations in Asia after World War II, Powerplay takes an original look at how global alliances are achieved and maintained.

Victor D. Cha holds the D. S. Song–Korea Foundation Chair in Government and is the director of Asian Studies at Georgetown University. He is also senior adviser at the Center for Strategic and International Studies (CSIS) in Washington, D. C.

"Powerplay is an illuminating and important book that should help to guide policy makers as they try to cope with the greatest challenge to the American alliance system in Asia since it was created some seven decades ago: the rise of a power, China, that wants to shake it up."—Richard Bernstein, Wall Street Journal

"An important contribution to the literature on alliance politics and regional security in Asia."—Yukari Iwanami, International Relations of the Asia-Pacific

"This book is an important contribution to the literature on alliance politics and regional security in Asia."—Yukari Iwanami, International Relations of the Asia-Pacific

"Until now, the literature lacked a comprehensive work examining the origins of post-WWII American alliances in Asia. Cha fills this gap. . . . A masterpiece of early Cold War history. . . . Cha successfully persuades readers that the hub and spokes alliance system was not the product of contingencies, but a deliberate choice of the Truman and Eisenhower administrations. . . . What makes this book original and worth reading is the integration of these important monographs and primary documents on the different bilateral alliances into one framework, which is the Powerplay strategy."—Giuseppe Spatafora, The International Spectator

"Victor Cha presents an exciting and original argument. His analysis is convincing, his research thorough, and his writing clear. . . . For anyone looking to understand why the American alliance system in Asia emerged so differently from the one in Europe, Powerplay should be required reading."—Mitchell Lerner, Michigan War Studies Review

"For any who are interested in thinking about American grand strategy in Asia from a historical or contemporary perspective, Cha's book is worth picking up. We cannot understand the future of U.S.-China relations in Asia without thinking deeply about its past."—Zbigniew Brzezinski, former National Security Advisor to U.S. President Jimmy Carter and Counselor at the Center for Strategic and International Studies

"Making important arguments about alliance behavior, Powerplay presents the history of critical cases of U.S. alliance behavior during the Cold War, and cleverly links that history to contemporary challenges in U.S. policy. The book's coverage of tense relations between the Republic of Korea and the United States in the 1940s and '50s is especially impressive. This is a great book."—Thomas Christensen, Princeton University

"This excellent and fascinating book explores the nature of and logic behind America's choice of bilateralism for its security relations with Asian states in the aftermath of World War II. Combining thoughtful and thought-provoking theoretical discussions with in-depth historical research, Powerplay is exemplary of what good IR research should look like."—Galia Press-Barnathan, Hebrew University of Jerusalem