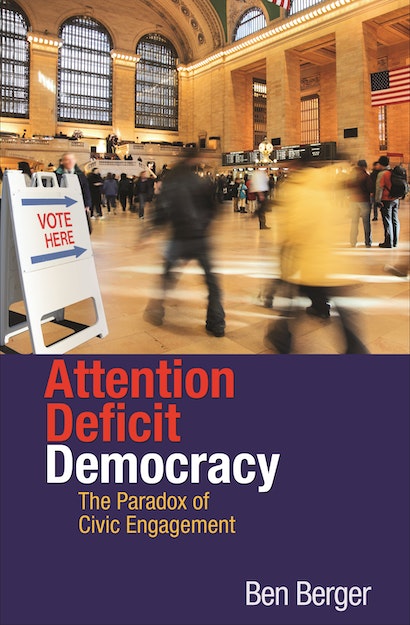 Handwringing about political apathy is as old as democracy itself. As early as 425 BC, the playwright Aristophanes ridiculed his fellow Athenians for gossiping in the market instead of voting. In more recent decades, calls for greater civic engagement as a democratic cure-all have met with widespread agreement. But how realistic — or helpful — is it to expect citizens to devote more attention and energy to politics? In Attention Deficit Democracy, Ben Berger provides a surprising new perspective on the problem of civic engagement, challenging idealists who aspire to revolutionize democracies and their citizens, but also taking issue with cynics who think that citizens cannot — and need not — do better.


“Civic engagement” has become an unwieldy and confusing catchall, Berger argues. We should talk instead of political, social, and moral engagement, figuring out which kinds of engagement make democracy work better, and how we might promote them. Focusing on political engagement and taking Alexis de Tocqueville and Hannah Arendt as his guides, Berger identifies ways to achieve the political engagement we want and need without resorting to coercive measures such as compulsory national service or mandatory voting.


By providing a realistic account of the value of political engagement and practical strategies for improving it, while avoiding proposals we can never hope to achieve, Attention Deficit Democracy makes a persuasive case for a public philosophy that much of the public can actually endorse.

"Acknowledging that there are real limits to how involved citizens will be in political activity, [Berger] develops a sophisticated and balanced argument for policies to enhance political engagement, mainly through institutional changes to encourage and especially to make better use of citizens' activity. The book is clearly written and accessible."—Choice

"I applaud Berger's effort to add analytic rigor to discussions that frequently devolve into reflexive paeans to civic engagement."—Justin Buchler, Perspectives on Politics

"Arendt and/or Tocqueville scholars may find Attention Deficit Democracy of interest. Berger offers contributions to scholarship on both, although his readings are not revolutionary. . . . [T]he strength of Berger's treatment of Arendt and Tocqueville is not novel interpretations, but the creative application of their thinking in explaining ADD."—Michael T. Rogers, Political Studies Review

"This book offers important correctives to the plethora of work on civic engagement produced by political theorists and political scientists over the past twenty years. Ben Berger argues that too much civic engagement—or engagement of the wrong sorts—can damage democracy as much as support it. This is a genuine work of public philosophy that offers insights and analytical tools for making contemporary democracies better."—Sharon Krause, Brown University

"This lucid and intelligent book will interest scholars and a broad swath of the politically inclined reading public. Berger writes with authority, wit, and directness, and his scholarship never gets in the way of the flow of his argument."—Dana Villa, University of Notre Dame