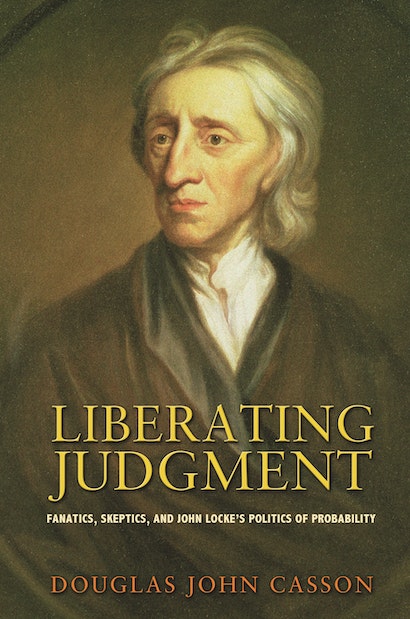 Examining the social and political upheavals that characterized the collapse of public judgment in early modern Europe, Liberating Judgment offers a unique account of the achievement of liberal democracy and self-government. The book argues that the work of John Locke instills a civic judgment that avoids the excesses of corrosive skepticism and dogmatic fanaticism, which lead to either political acquiescence or irresolvable conflict. Locke changes the way political power is assessed by replacing deteriorating vocabularies of legitimacy with a new language of justification informed by a conception of probability. For Locke, the coherence and viability of liberal self-government rests not on unassailable principles or institutions, but on the capacity of citizens to embrace probable judgment.


The book explores the breakdown of the medieval understanding of knowledge and opinion, and considers how Montaigne’s skepticism and Descartes’ rationalism — interconnected responses to the crisis — involved a pragmatic submission to absolute rule. Locke endorses this response early on, but moves away from it when he encounters a notion of reasonableness based on probable judgment. In his mature writings, Locke instructs his readers to govern their faculties and intellectual yearnings in accordance with this new standard as well as a vocabulary of justification that might cultivate a self-government of free and equal individuals. The success of Locke’s arguments depends upon citizens’ willingness to take up the labor of judgment in situations where absolute certainty cannot be achieved.

"Casson has written a superb treatment of John Locke. . . . Casson's writing is clear and accessible, and thus appropriate for any level of student already familiar with Locke's work. The book is an excellent contribution to Locke scholarship."—Choice

"This is an attractive book, well printed, well bound, and well designed. Its arguments are always interesting, indeed fascinating, its scholarship is often admirable. . . . Professor Casson [has written an] intelligent, ingenious, stimulating, searching and provocative . . . piece of work."—Locke Studies

"This innovative treatment of Locke emphasizes the role of probable judgment in early modern political thought. Casson clearly demonstrates that Locke, like several of his contemporaries, was searching for a middle way between the skepticism and dogmatism that characterized so much of the early modern era, and that he was able to apply a probabilistic solution to the political sphere."—Barbara Shapiro, University of California, Berkeley

"Liberating Judgment is a welcome addition to the literature on Locke. More clearly and powerfully than any previous book, it traces the importance of the theme of probable judgment across several aspects of Locke's work, including his writings on medicine, epistemology, metaphysics, economics, and politics."—Alex Tuckness, Iowa State University