Why Plato, Hobbes, and Marx are great—despite their arguments 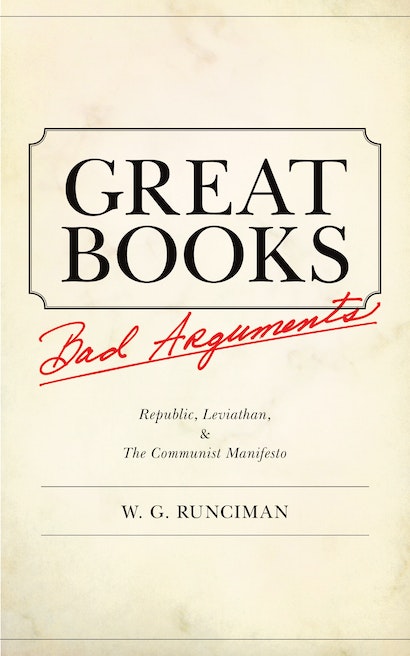 Plato’s Republic, Hobbes’s Leviathan, and Marx’s Communist Manifesto are universally acknowledged classics of Western political thought. But how strong are the core arguments on which they base their visions of the good society that they want to bring into being? In this lively and provocative book, W. G. Runciman shows where and why they fail, even after due allowance has been made for the different historical contexts in which they wrote. Plato, Hobbes, and Marx were all passionately convinced that justice, peace, and order could be established if only their teachings were implemented and the right people put into power. But Runciman makes a powerful case to the effect that all three were irredeemably naive in their assumptions about how human societies function and evolve and how human behavior could be changed. Yet despite this, Runciman insists that Republic, Leviathan, and The Communist Manifesto remain great books. Born of righteous anger and frustration, they are masterfully eloquent pleas for better worlds—worlds that Plato, Hobbes, and Marx cannot bring themselves to admit to be unattainable.

W. G. Runciman is a fellow of Trinity College, University of Cambridge. His books include The Social Animal and The Theory of Cultural and Social Selection.

"Runciman wastes little time in paying homage to the enduring influence of Plato's Republic, Hobbes's Leviathan and Marx's The Communist Manifesto. . . With verve and a forensic analytical framework, Runciman attempts to demolish their fundamental tenets and misguided aims. One by one he explores the central arguments of those responsible for building the edifice of Western political thought and pinpoints their perceived flaws. Runciman's underlying aim is to highlight that, stripped of their halos, these texts rely on a farrago of shoddy arguments. His intention is to dethrone Plato, Hobbes and Marx from their lofty status and fill the space vacated with more plausible assumptions about what motivates human action and, by analogy, the corresponding societies that are capable of flourishing."—Frank Carrigan, Australian

"This book . . . is . . . an important contribution. It is also well written and well-produced, and I commend it to those with any interest in sociology, political theory, or political philosophy."—John Preston, European Legacy