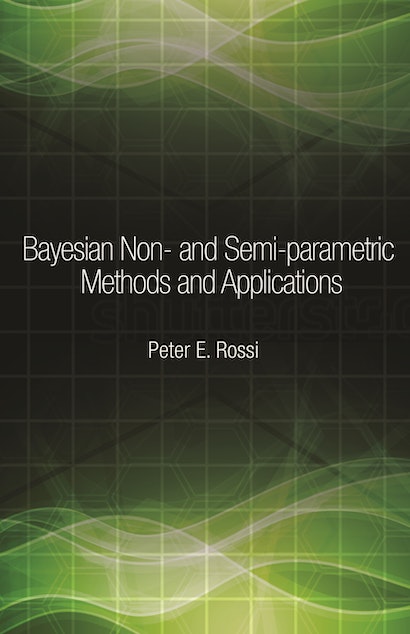 This book reviews and develops Bayesian non-parametric and semi-parametric methods for applications in microeconometrics and quantitative marketing. Most econometric models used in microeconomics and marketing applications involve arbitrary distributional assumptions. As more data becomes available, a natural desire to provide methods that relax these assumptions arises. Peter Rossi advocates a Bayesian approach in which specific distributional assumptions are replaced with more flexible distributions based on mixtures of normals. The Bayesian approach can use either a large but fixed number of normal components in the mixture or an infinite number bounded only by the sample size. By using flexible distributional approximations instead of fixed parametric models, the Bayesian approach can reap the advantages of an efficient method that models all of the structure in the data while retaining desirable smoothing properties. Non-Bayesian non-parametric methods often require additional ad hoc rules to avoid “overfitting,” in which resulting density approximates are nonsmooth. With proper priors, the Bayesian approach largely avoids overfitting, while retaining flexibility. This book provides methods for assessing informative priors that require only simple data normalizations. The book also applies the mixture of the normals approximation method to a number of important models in microeconometrics and marketing, including the non-parametric and semi-parametric regression models, instrumental variables problems, and models of heterogeneity. In addition, the author has written a free online software package in R, “bayesm,” which implements all of the non-parametric models discussed in the book.

Peter E. Rossi is the James Collins Professor of Marketing, Economics, and Statistics at UCLA's Anderson School of Management. He has published widely in marketing, economics, statistics, and econometrics and is a coauthor of Bayesian Statistics and Marketing.

"As the creator of bayesm (R software for Bayesian inference) and lead author of Bayesian Statistics and Marketing, Rossi has deep knowledge of the book's titular methods."—Choice

"Peter Rossi, an expert on Bayesian analysis, presents a crisp introduction to an increasingly important class of models and their use in econometric applications."—Andrew Gelman, Columbia University

"This book shows that a combination of the Bayesian paradigm and (infinite) mixtures of normal distributions can be used to construct a very flexible and robust class of semi- or non-parametric methods. Rossi presents these methods in such a way that they can be applied by anyone with a basic knowledge of Bayesian econometrics. The book will be highly valued as a source of inspiration for incorporating non-parametric ideas in Bayesian models and as a reference for many applications of these techniques."—Dennis Fok, Erasmus University Rotterdam

"Rossi shows that the Bayesian approach to statistics can be applied to marketing and microeconometrics data without making the strong 'parametric' assumptions about functional forms and error distribution that are commonly made. The discussion and examples make a good case for the non-parametric Bayesian approach to these problems, and researchers will find it a valuable resource."—Edward Greenberg, professor emeritus, Washington University in St. Louis