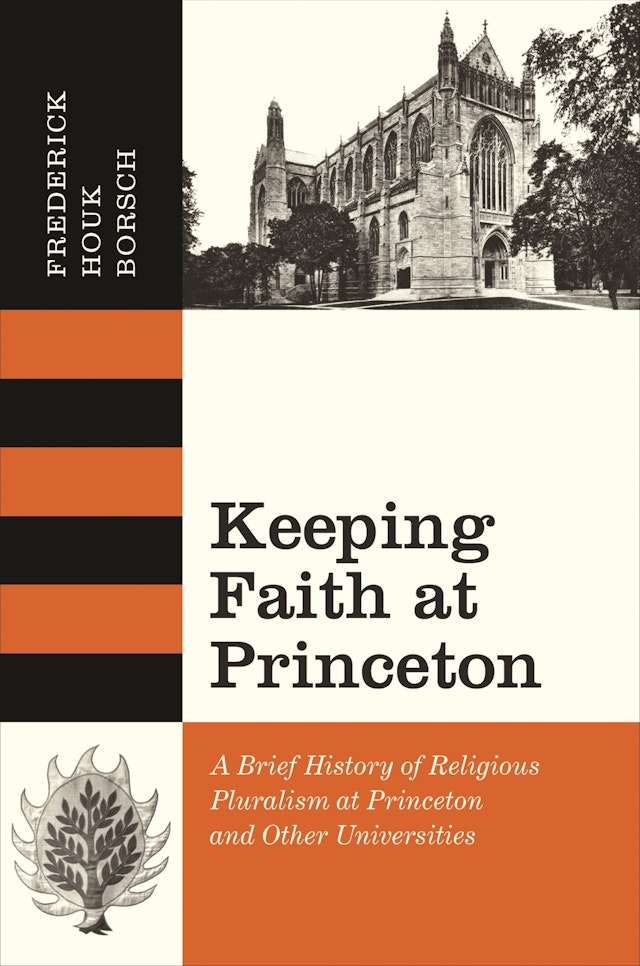 In 1981, Frederick Houk Borsch returned to Princeton University, his alma mater, to serve as dean of the chapel at the Ivy League school. In Keeping Faith at Princeton, Borsch tells the story of Princeton’s journey from its founding in 1746 as a college for Presbyterian ministers to the religiously diverse institution it is today. He sets this landmark narrative history against the backdrop of his own quest for spiritual illumination, first as a student at Princeton in the 1950s and later as campus minister amid the turmoil and uncertainty of 1980s America.

Borsch traces how the trauma of the Depression and two world wars challenged the idea of progress through education and religion — the very idea on which Princeton was founded. Even as the numbers of students gaining access to higher education grew exponentially after World War II, student demographics at Princeton and other elite schools remained all male, predominantly white, and Protestant. Then came the 1960s. Campuses across America became battlegrounds for the antiwar movement, civil rights, and gender equality. By the dawn of the Reagan era, women and blacks were being admitted to Princeton. So were greater numbers of Jews, Catholics, and others. Borsch gives an electrifying insider’s account of this era of upheaval and great promise.

With warmth, clarity, and penetrating firsthand insights, Keeping Faith at Princeton demonstrates how Princeton and other major American universities learned to promote religious diversity among their students, teachers, and administrators.

Frederick Houk Borsch is the Chair of Anglican Studies at the Lutheran Theological Seminary at Philadelphia and was Episcopal bishop of Los Angeles. His many books include The Spirit Searches Everything: Keeping Life's Questions. From 1981 to 1988, he was dean of the chapel at Princeton University.

"Borsch artfully combines autobiographical reflections with an intriguing analysis of the changing role of religion at Princeton in particular and in American higher education more generally."—P.C. Kemeny, Books & Culture

"Fred Borsch's Keeping Faith at Princeton is an intellectual gem and spiritual jewel. We Princetonians should be grateful to him."—Cornel West, Princeton University

"In describing Princeton's evolution from its Presbyterian past and homogeneous student body to the pluralism and diversity of today, Borsch shows that the university's active support of interfaith dialogue and cooperation makes an important contribution to the post-9/11 world."—John C. Danforth, former U.S. senator

"A splendid account of Princeton's response to increasingly diverse religious practices among students, faculty, and alumni over the last half century. Writing from his own engaged and critical involvement as undergraduate, dean of religious life, and trustee, Borsch also offers synopses of developments elsewhere. Keeping Faith at Princeton will prove highly informative for those seeking to understand the current religious dimension of life at colleges and universities, indeed throughout American society."—John F. Wilson, Princeton University

"Frederick Borsch has written an excellent book that deals with the complicated and controversial subject of the role of religion on college and university campuses. This is the best discussion of the subject that I know, and everyone interested in the topic will want to read this exceptional work."—Neil Rudenstine, president emeritus, Harvard University

"Keeping Faith at Princeton is an engaging firsthand account of how religious diversity was achieved at one of the nation's most prestigious campuses. Borsch has given us a rare inside look at the complex, sometimes tortuous, and for the most part effective decisions that faculty, students, and administrators have made—and continue to make—in adapting to religious diversity."—Robert Wuthnow, author of Red State Religion: Faith and Politics in America's Heartland