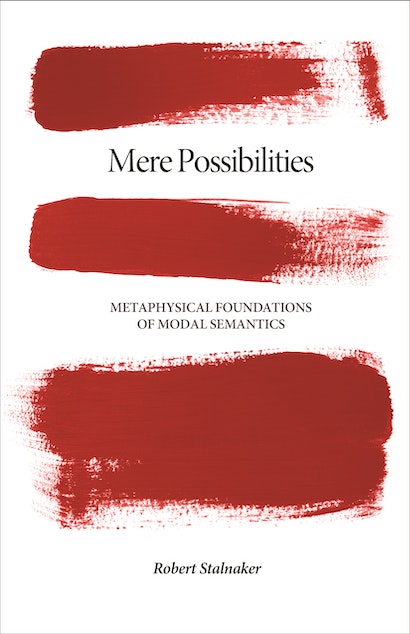 It seems reasonable to believe that there might have existed things other than those that in fact exist, or have existed. But how should we understand such claims? Standard semantic theories exploit the Leibnizian metaphor of a set of all possible worlds: a proposition might or must be true if it is true in some or all possible worlds. The actualist, who believes that nothing exists except what actually exists, prefers to talk of possible states of the world, or of ways that a world might be. But even the actualist still faces the problem of explaining what we are talking about when we talk about the domains of other possible worlds. In Mere Possibilities, Robert Stalnaker develops a framework for clarifying this problem, and explores a number of actualist strategies for solving it.


Some philosophers have hypothesized a realm of individual essences that stand as proxies for all merely possible beings. Others have argued that we are committed to the necessary existence of everything that does or might exist. In contrast, Mere Possibilities shows how we can make sense of ordinary beliefs about what might and must exist without making counterintuitive metaphysical commitments. The book also sheds new light on the nature of metaphysical theorizing by exploring the interaction of semantic and metaphysical issues, the connections between different metaphysical issues, and the nature of ontological commitment.

Robert Stalnaker is the Laurance S. Rockefeller Professor of Philosophy at Massachusetts Institute of Technology. He is the author of Our Knowledge of the Internal World,
Ways a World Might Be,
Context and Content, and Inquiry.

"Stalnaker does us a service by illustrating the value—indeed, the philosophical necessity—of working from a conception of the models of possible-world semantic theories that is appropriately extensive, explicit, and nuanced. But prospective readers can also expect a great deal more than that from the serious study that this fine work both requires and repays."—John Divers, Philosophical Quarterly

"Mere Possibilities is a rich and subtle text that might be connected in any number of ways to the literature on possible-world semantics and its relationship to metaphysics. . . . Stalnaker does us a service by illustrating the value—indeed, the philosophical necessity—of working from a conception of the models of possible-world semantic theories that is appropriately extensive, explicit, and nuanced. But prospective readers can also expect a great deal more than that from the serious study that this fine work both requires and repays."—John Divers, Oxford Journals

"This is a subtle, nuanced exploration of the metaphysical basis for talk of possible worlds and its far from straightforward relation to the version of formal semantics known as 'possible worlds semantics,' both of which have been immensely influential in recent decades. Robert Stalnaker has been one of the major players in debates on these matters, and this book contains significant further developments of his ideas."—Timothy Williamson, University of Oxford

"This is a first-rate book and a model of the best kind of unfussy scholarly writing. Robert Stalnaker combines an admirable economy of presentation with clarity, rigor, and thoroughness in exposition and argument. This is a major contribution to the field, and one to which philosophers, logicians, and linguists with any serious interest in modality should attend."—Bob Hale, University of Sheffield