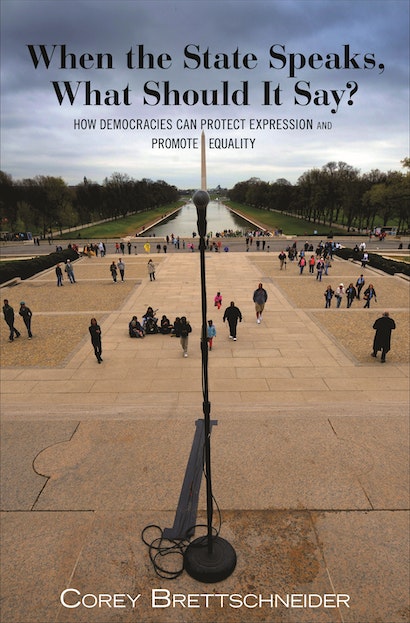 How should a liberal democracy respond to hate groups and others that oppose the ideal of free and equal citizenship? The democratic state faces the hard choice of either protecting the rights of hate groups and allowing their views to spread, or banning their views and violating citizens’ rights to freedoms of expression, association, and religion. Avoiding the familiar yet problematic responses to these issues, political theorist Corey Brettschneider proposes a new approach called value democracy. The theory of value democracy argues that the state should protect the right to express illiberal beliefs, but the state should also engage in democratic persuasion when it speaks through its various expressive capacities: publicly criticizing, and giving reasons to reject, hate-based or other discriminatory viewpoints.


Distinguishing between two kinds of state action — expressive and coercive — Brettschneider contends that public criticism of viewpoints advocating discrimination based on race, gender, or sexual orientation should be pursued through the state’s expressive capacities as speaker, educator, and spender. When the state uses its expressive capacities to promote the values of free and equal citizenship, it engages in democratic persuasion. By using democratic persuasion, the state can both respect rights and counter hateful or discriminatory viewpoints. Brettschneider extends this analysis from freedom of expression to the freedoms of religion and association, and he shows that value democracy can uphold the protection of these freedoms while promoting equality for all citizens.

"[T]his book's argument is very strong, and its attention to anticipating and rebutting objections is both exceptional and laudable. When the State Speaks is likely to become the standard political-liberal treatise on the ways in which a democratic state should treat inegalitarian viewpoints—no small achievement given the persistence and quality of debates in this area."—Andrew Sabl, Perspectives on Politics

"This stimulating and carefully argued book makes a substantial contribution to the debate over how liberal states should respond to illiberal groups within their borders. The topic is timely and important, and even readers who disagree with Corey Brettschneider's positions will find that his arguments repay close attention."—David McCabe, Political Science Quarterly

"This is a really good book. Brettschneider's When the State Speaks is both provocative and persuasive, resolving a stubborn conflict within democratic theory in a way many will initially reject, but which he argues for so effectively that, by the end, the controversial appears the commonsensical. . . . [T]his is a useful book, clearly written and well-argued. It is a great addition to political theory."—Sarah Conly, Res Publica

"I strongly recommend this book. It deserves serious reflection and critical discussion."—John A. Dick, Ethical Perspectives

"Brettschneider's [book] . . . is a carefully argued and coherent defense of the American approach, a defense more thoughtful, more internally consistent, and more connected with the relevant philosophical literature than will ever plausibly be located in a judicial opinion. His connection of issues about government speech with the political theory literature on neutrality is innovative, analytically deep, and careful, and his discussion of free speech theory and doctrine, while less innovative, is nevertheless rigorous, accurate, and well aimed at exactly the target of his interest."—Frederick Schauer, Political Theory

"A bold answer to the problem of the liberal state which allows illiberal views to flourish without coercion, this book shows that core liberal ideals can be expressed by the state in words, funding, and schooling. Corey Brettschneider consolidates and extends his theory of value democracy, offering an alternative to neutrality and perfectionism alike."—Melissa Lane, Princeton University

"In this lucid and compelling book, Brettschneider takes on some of the most vexing issues in contemporary liberal polities, and offers a theory of value democracy as a touchstone for addressing those issues. His argument is one with which everyone will have to engage. A pleasure to read, this is political theory at its best."—Austin Sarat, Amherst College