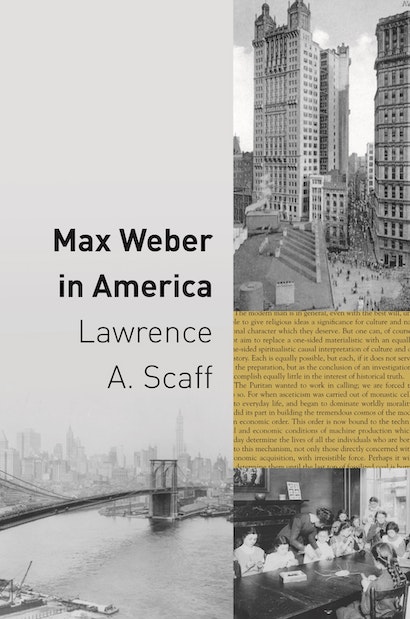 Max Weber, widely considered a founder of sociology and the modern social sciences, visited the United States in 1904 with his wife Marianne. The trip was a turning point in Weber’s life and it played a pivotal role in shaping his ideas, yet until now virtually our only source of information about the trip was Marianne Weber’s faithful but not always reliable 1926 biography of her husband.Max Weber in America carefully reconstructs this important episode in Weber’s career, and shows how the subsequent critical reception of Weber’s work was as American a story as the trip itself.


Lawrence Scaff provides new details about Weber’s visit to the United States — what he did, what he saw, whom he met and why, and how these experiences profoundly influenced Weber’s thought on immigration, capitalism, science and culture, Romanticism, race, diversity, Protestantism, and modernity. Scaff traces Weber’s impact on the development of the social sciences in the United States following his death in 1920, examining how Weber’s ideas were interpreted, translated, and disseminated by American scholars such as Talcott Parsons and Frank Knight, and how the Weberian canon, codified in America, was reintroduced into Europe after World War II.


A landmark work by a leading Weber scholar, Max Weber in America will fundamentally transform our understanding of this influential thinker and his place in the history of sociology and the social sciences.

Lawrence A. Scaff is professor of political science and sociology at Wayne State University. He is the author of Fleeing the Iron Cage: Culture, Politics, and Modernity in the Thought of Max Weber.

"In 1904, shortly after emerging from severe psychological illness and between the two essays that made up The Protestant Ethic and the Spirit of Capitalism, Max Weber traveled with his wife, Marianne, to the U.S., where he would deliver a paper at the Congress of Arts and Science in St. Louis. Drawing from a rich variety of archival material, Scaff has written the definitive story of that trip."—Choice

"Scaff has undertaken a prodigious amount of archival research in tracing Weber's path through the United States, and it is difficult to conceive of what would comprise a more definitive examination of this period in Weber's life and work."—John G. Gunnell, Journal of American History

"This close-grained reading of Weber's American trip and the American dissemination of his writings sheds illuminating light on both. . . . Weber scholars will find Scaff's meticulous treatment of the translation of Weber's texts extremely useful."—Daniel Rodgers, H-Net Reviews

"Given its scale, the uniqueness of its insights and the relentless industry displayed, this is a work of scholarship which is most unlikely to be superseded. The study comes at Weber from an unexpected angle and adds much to the understanding of this multifaceted giant founder of sociology."—Kieran Flanagan, Canadian Journal of Sociology

"[A] readable intellectual biography of a major work in social science as well as a fascinating discussion of the politics and personalities behind what seems . . . an inevitable and unalterable stand alone work. Those unfamiliar with Weber may flounder at first, but the anecdotes about the various people and places should hold the reader until the rhythm of the work becomes comfortable and the ideas fall into place. A well developed and insightful presentation should maintain Scaff's status as a leading Weber scholar."—John Barnhill, 49th Parallel

"[T]his is an extraordinary work of dedicated research, performed by a scholar who came to the task with genuine Weberian instincts. Scaff treats his subject with an empathy, sobriety and fairness that are a model to social and political scientists. Admittedly, not many in our ranks could approach Weber's heights of scholarly innovation, because, as Scaff quietly reminds us, he saw further and deeper into American society than most native born or foreign researchers. Max Weber in America is a tribute to a scholar who built his social theory on scientific notions of objectivity and moral impulses of decency."—Irving Louis Horowitz, European Legacy

"Scaff provides such a wealth of information that at times the book seems more about turn of the century America than about Weber. Scaff also devotes a considerable amount of attention to Marianne and her interest in women's rights. As a consequence, Max Weber sometimes seems to disappear from view. This might seem to be a criticism, but Scaff's ability to discuss such a wide range of issues is so good and his focus on Marianne is justly warranted, that this is no drawback to his book."—Christopher Adair-Toteff, Sociology

"Scaff's book is fascinating reading. Its scrupulous description of Weber's background and life events and his analysis of Weber's reception in the American universities and scholarship combine expertise and insight. It covers a relatively unknown episode in Weber's life with an excellent and thorough research."—Simonetta Piccone Stella, Sociologica

"Students of Weber have long been waiting for a study of his 1904 visit to the United States. It is finally here, splendidly researched and beautifully written by one of the foremost experts on Weber. The reader gets to follow Weber roaming the streets of New York and Chicago, meeting with luminaries such as W.E.B. Du Bois and William James, and participating in the famous Congress of Arts and Science in St. Louis, which occasioned the visit."—Richard Swedberg, Cornell University

"This is an outstanding and pioneering work. Scaff offers a vivid picture of Weber's American experience as it has never been written before, and his book is full of fresh insights. He possesses a deep and detailed knowledge of both the American scene and of Weber's German contexts and background—few Weberians combine both qualifications as excellently as Scaff does. Reading this book was pure pleasure."—Joachim Radkau, Bielefeld University, Germany

"Max Weber in America is a masterpiece. Scaff is recognized as a leading Weber scholar and social theorist, and here he demonstrates the intellectual significance of Weber's visit to the United States both for Weber's work and for its subsequent American reception. There is no comparable book."—Guenther Roth, professor emeritus, Columbia University