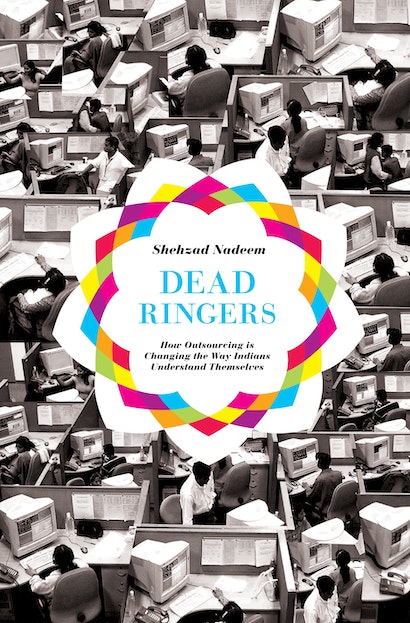 In the Indian outsourcing industry, employees are expected to be “dead ringers” for the more expensive American workers they have replaced — complete with Westernized names, accents, habits, and lifestyles that are organized around a foreign culture in a distant time zone. Dead Ringers chronicles the rise of a workforce for whom mimicry is a job requirement and a passion. In the process, the book deftly explores the complications of hybrid lives and presents a vivid portrait of a workplace where globalization carries as many downsides as advantages.


Shehzad Nadeem writes that the relatively high wages in the outsourcing sector have empowered a class of cultural emulators. These young Indians indulge in American-style shopping binges at glittering malls, party at upscale nightclubs, and arrange romantic trysts at exurban cafés. But while the high-tech outsourcing industry is a matter of considerable pride for India, global corporations view the industry as a low-cost, often low-skill sector. Workers use the digital tools of the information economy not to complete technologically innovative tasks but to perform grunt work and rote customer service. Long hours and the graveyard shift lead to health problems and social estrangement. Surveillance is tight, management is overweening, and workers are caught in a cycle of hope and disappointment.


Through lively ethnographic detail and subtle analysis of interviews with workers, managers, and employers, Nadeem demonstrates the culturally transformative power of globalization and its effects on the lives of the individuals at its edges.

Shehzad Nadeem is assistant professor of sociology at the City University of New York, Lehman College. 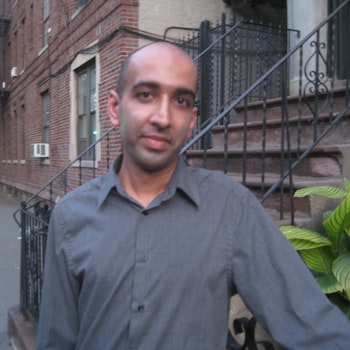 "[Nadeem] offers concrete and important insight into the world of outsourcing. . . . One cannot help agreeing with the author that the brave new IT world documented in his interviews disturbs more than it shines."—Andrew Robinson, Nature

"Dead Ringers is an excellent resource for both students and scholars and should be required reading for policymakers, whose faith in or distrust of globalization may miss its very point: 'economic growth should be recognized not [as] an end in itself but as means toward the realization of diverse human potentialities.'"—May-Lee Chai, Asian Affairs

"Dead Ringers' insightful and articulate contribution proves to be a fruitful, engaging, provocative response to the questions asked by anyone that ever found themselves talking to an Indian call centre worker and wondered what it would look, smell, feel and sound like on the other end of the line."—Zachary Condon, Journal of Intercultural Studies

"This is an important book. The tone of the book is academic and the style difficult, and some may disagree with the Marxian framework used, it is well worth a read for anyone who wishes to understand the sociological dynamics of this fledgling industry."—Jajodia, Businessworld

"After speaking with dozens of employees from call centers and white-collar subsidiaries of multinational firms, Nadeem questions the optimistic and conventional view that outsourcing, and globalization in general, benefits Indians. His concerns are not economic—those employed in the outsourcing industry certainly do earn comparatively higher salaries—but rather on the effect that outsourcing has on individual workers and Indian society as a whole."—Maura Elizabeth Cunningham, Asian Review of Books

"Sociolgist Nadeem explores the Indian call center industry and its effects on its workers, a topic with relatively little scholarly literature. . . . The book covers a lot of ground, analyzing call center lifestyles in terms of language, time, gender, class, work culture, and shifting notions of morality. . . . Overall, the book is useful to graduate students or faculty interested in how globalization operates at the local level or in the outsourcing industry."—Choice

"The main contribution of this book lies in the social and cultural analyses of work sites and workers as their lives unfold through a typical day-night set of activities monitored in ways that may appear to reduce workers into objects. . . . [It] captures broadly the contradictions involved in the lives of workers of the outsourcing industry, as well as actions of the Indian state."—Mangala Subramaniam, Contemporary Sociology

"Armed with sensitive ethnographic detail and careful attention to the material and symbolic structures of the global economy. . . . Nadeem ushers us into the everyday texture of the outsourcing industry, where he focuses on the ironic, funny, and often troubling everyday lives of the people who constitute it."—American Journal of Sociology

"Nadeem's carefully crafted prose, literary style, and incisive critique make this book an important and timely contribution to the burgeoning sociological literature on outsourcing, asserting a dark critique of the economic and cultural processes that legitimate a peculiar consumerist-worker in India. His bold engagement with prevailing claims about contemporary India serves to debunk stereotypes, producing an original, empirically grounded, and politically astute narrative of one of globalization's hot spots."—Smitha Radhakrishnan, American Journal of Sociology

"A majority of America's Fortune 2000 companies say that off-shoring is an integral part of their growth strategy. So what's it like on the other side? Nadeem takes us into the back offices where Indian workers take American calls on all-night shifts under tough conditions. Yet workers also feel elevated by the pay and imagined participation in an American lifestyle which is, ironically, receding in the United States. An extremely well-informed and deep look at a crucial issue of the age."—Arlie Hochschild, coauthor of The Second Shift

"In this striking new work, globalization is not a slogan or abstraction: it is a living, breathing transformation of the lives of educated, middle-class young people in India who work in call centers and other back-office operations of Western corporations. With wit, irony, and literary flair, Nadeem makes vivid all the contradictions of their complicated lives. This is a window on people half a world away who, on the telephone, sound like they live next door. They do not, and the way they live has never been better portrayed."—Michael Schudson, Columbia University

"Dead Ringers is a brilliant exploration of the perplexing world that global outsourcing has wrought. With lucid and engaging prose, Nadeem shows how conspicuous consumption and exploitation are two sides of the same coin. This smart and witty book is essential reading for anyone concerned about the future of work and culture in a global age."—John Skrentny, University of California, San Diego

"Drawing on interviews, document analysis, and participant observation, this engaging book provides a nuanced, insightful analysis of the fascinating phenomenon of IT and service work outsourcing to India."—Kiran Mirchandani, University of Toronto

"This terrific and well-organized book gives a ground-up view of an industry where the costs of globalization are borne by its so-called winners—the middle-class IT and call center workers in India who have fueled production and consumption patterns, and contributed to the enlargement of the middle class. I greatly enjoyed reading this book and found it to be extremely informative."—Ethel Brooks, author of Unraveling the Garment Industry