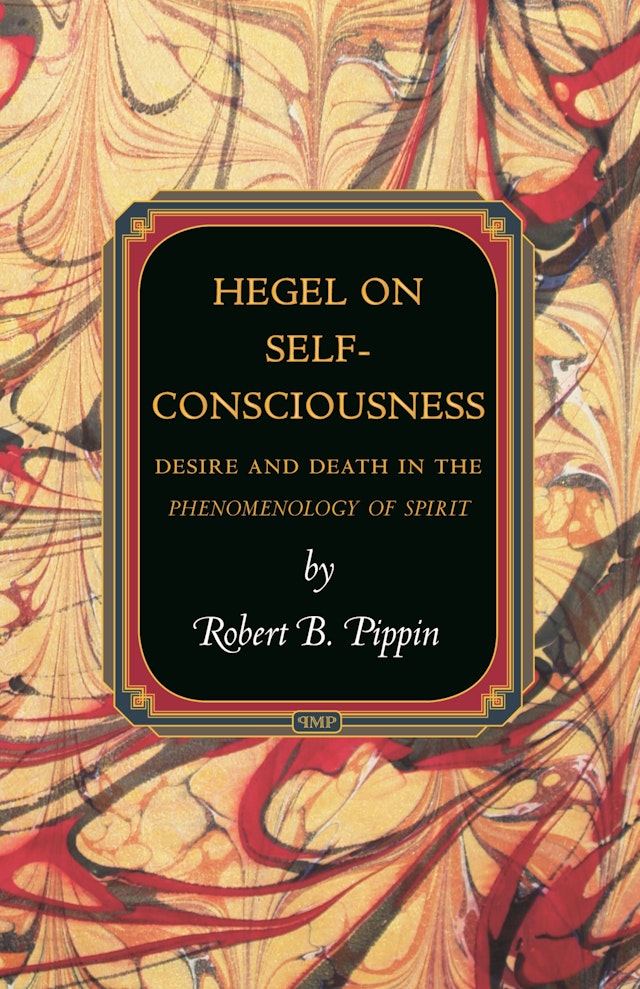 In the most influential chapter of his most important philosophical work, the Phenomenology of Spirit, Hegel makes the central and disarming assertions that “self-consciousness is desire itself” and that it attains its “satisfaction” only in another self-consciousness. Hegel on Self-Consciousness presents a groundbreaking new interpretation of these revolutionary claims, tracing their roots to Kant’s philosophy and demonstrating their continued relevance for contemporary thought.


As Robert Pippin shows, Hegel argues that we must understand Kant’s account of the self-conscious nature of consciousness as a claim in practical philosophy, and that therefore we need radically different views of human sentience, the conditions of our knowledge of the world, and the social nature of subjectivity and normativity. Pippin explains why this chapter of Hegel’s Phenomenology should be seen as the basis of much later continental philosophy and the Marxist, neo-Marxist, and critical-theory traditions. He also contrasts his own interpretation of Hegel’s assertions with influential interpretations of the chapter put forward by philosophers John McDowell and Robert Brandom.

Robert B. Pippin is the Evelyn Stefansson Nef Distinguished Service Professor in the John U. Nef Committee on Social Thought and in the Department of Philosophy at the University of Chicago. His books include Hegel's Practical Philosophy: Rational Agency as Ethical Life and Henry James and Modern Moral Life.

"Pippin, one of the finest contemporary scholars on Kant and post-Kantian German idealism, presents here two essays that focus on two of Hegel's claims—that self-consciousness is desire itself, and that it finds its satisfaction only in others. . . . Pippin's essays provide a skillful interpretation of one of the most important parts of Hegel's corpus, and illuminate Phenomenology of Spirit as well as historical and contemporary interpretations of Hegel's account of self-consciousness."—Choice

"This book should appeal to readers interested in the Phenomenology of Spirit, especially graduate students and researches who wish to understand the contemporary significance of Hegel's account of self-consciousness for McDowell and Brandom. Pippin has provided a lucid reading of these very dense passages. Regardless of whether one agrees with Pippin's reading, it will prove difficult for Hegel scholars to ignore."—Corey McCall, Philosophy in Review

"Hegel on Self-Consciousness is the best treatment of the subject in English, French, or German—it is also clear, short, and to the point. It will very likely serve as a basic text in a variety of undergraduate and graduate courses. Pippin is one of the most widely read philosophers of our time."—Terry P. Pinkard, Georgetown University

"Pippin is one of the leading Hegel interpreters working today. Readers interested in Hegel—be they philosophers, literary theorists, or intellectual historians—will greatly benefit from this book. Pippin's insight into Hegel's philosophy is highly impressive, and the depth of his thought is evident in his analysis of the connection Hegel discovers between desire and self-consciousness."—Sally Sedgwick, University of Illinois, Chicago