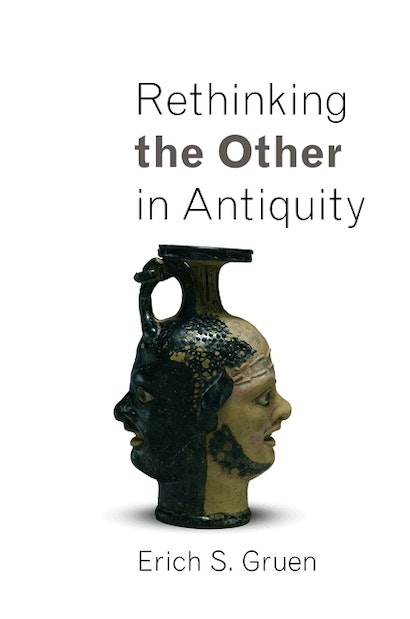 Prevalent among classicists today is the notion that Greeks, Romans, and Jews enhanced their own self-perception by contrasting themselves with the so-called Other — Egyptians, Phoenicians, Ethiopians, Gauls, and other foreigners — frequently through hostile stereotypes, distortions, and caricature. In this provocative book, Erich Gruen demonstrates how the ancients found connections rather than contrasts, how they expressed admiration for the achievements and principles of other societies, and how they discerned — and even invented — kinship relations and shared roots with diverse peoples.


Gruen shows how the ancients incorporated the traditions of foreign nations, and imagined blood ties and associations with distant cultures through myth, legend, and fictive histories. He looks at a host of creative tales, including those describing the founding of Thebes by the Phoenician Cadmus, Rome’s embrace of Trojan and Arcadian origins, and Abraham as ancestor to the Spartans. Gruen gives in-depth readings of major texts by Aeschylus, Herodotus, Xenophon, Plutarch, Julius Caesar, Tacitus, and others, in addition to portions of the Hebrew Bible, revealing how they offer richly nuanced portraits of the alien that go well beyond stereotypes and caricature.


Providing extraordinary insight into the ancient world, this controversial book explores how ancient attitudes toward the Other often expressed mutuality and connection, and not simply contrast and alienation.

Erich S. Gruen is the Gladys Rehard Wood Professor of History and Classics (emeritus) at the University of California, Berkeley. His books include Diaspora: Jews amidst Greeks and Romans and Heritage and Hellenism: The Reinvention of Jewish Tradition.

"[T]he range of research, and the depth of thought, are extraordinary. Gruen has taken on a massively important subject, and he has brought a genuinely new perspective to the scholarly conversation."—Emily Wilson, New Republic

"[Gruen] is at his best when he dissects Greco-Roman perceptions of the Jews and the Jewish reception of Greco-Roman culture and accommodation with the world of the goyim."—Choice

"Rethinking the Other in Antiquity, by Erich S. Gruen, out this month from Princeton University Press, like all excellent scholarship massages the mind in useful new directions. . . . Gruen's mission . . . is to unpack the contrary story, far less told: 'that Greeks, Romans, and Jews (who provide us with almost all the relevant extant texts) had far more mixed, nuanced, and complex opinions about other peoples.' In the main text and many useful footnotes of this info-packed but never boring study, Gruen accomplishes that."—Carlin Romano, Chronicle Review

"Anthropologists should seriously consider Gruen's case, and it would be wonderful if this appreciation of and openness to different peoples and cultures could somehow enter into contemporary politics and culture."—Jack David Eller, Anthropology Review Database

"Rethinking the Other is an extremely valuable departure from a scholarly viewpoint that has threatened to become ossified of late, and as such is very worthwhile to everyone involved in the study of ancient conceptions of foreignness and belonging."—Antti Lampinen, ARCTOS

"Erich Gruen's Rethinking the Other in Antiquity is a book that, for one reason or another, desperately needed to be written, ideally by someone possessing G.'s authoritative command of the vast array of sources indicative of ancient knowledge of, and interest in, foreign peoples. . . . The result is a provocative, wide-ranging and thoroughly engaging volume that is both beautifully produced—with copious footnotes, helpful indices and handsome book-jacket featuring a (highly apposite) janiform vase—and (very) reasonably priced. The latter is fortuitous since it will automatically become a set text for courses touching on ancient self-conception and relations with foreign peoples and mandatory reading for anyone researching these and cognate fields."—Joseph Skinner, Journal of Roman Studies

"Rethinking the Other in Antiquity amounts to a major reassessment of an important topic. In light of the voluminous evidence Gruen assembles, it seems untenable to contend that Greek, Roman, and Jewish views of other cultures can be reduced to self-serving stereotypes and denigrations. Hopefully his book will help usher in more nuanced and charitable perspectives."—Eric Adler, European Legacy

"This erudite and lucid treatment of the limits of tolerance and open-mindedness toward the Other in ancient Greece, Rome, and the Jewish world deals with a topic central to our evaluation of any society. The book will be an all-important source of information and will stimulate renewed discussion of the moral standards of the ancients in their attitudes toward foreigners. This absorbingly written work will lead to a reconsideration of questions regarding ethnic identity in the ancient Mediterranean world."—Benjamin Isaac, Tel Aviv University

"Gruen has produced an original and learned book that gives fresh insight into the complex issues of race in the ancient world and offers a more nuanced understanding of the interactions of ancient cultures that will hopefully enable us all to view the interactions between cultures in today's world with greater sensitivity."—David Potter, University of Michigan

"Did ancient Greeks regard Persians and Egyptians as servile 'barbarians,' by way of indicating their own superiority? Did Romans believe that Carthaginians were essentially perfidious, Gauls and Germans primitive, Jews weird and despicable? With deep learning and a graceful style, Gruen shows that these modern generalizations are wide of the mark, and that ancient attitudes toward foreigners were nuanced and by and large positive. The book invites us to inquire whether scholars have projected onto the classical world a sense of ethnic 'otherness' more characteristic of our own."—David Konstan, Brown University

"Greeks often referred to other peoples as 'barbarians,' while Romans considered themselves destined to rule the world, and viewed many of their subjects and adversaries (Greeks, Jews, Persians) with distrust or contempt. 'Otherness' can seem an ineradicable element of Greek, Roman, and Jewish thought. But Erich Gruen urges us to 'rethink the Other,' arguing with his customary verve and erudition that ancient attitudes were more nuanced than has often been supposed."—Christopher Jones, Harvard University

"This is an excellent and timely book on an important topic. Gruen persuasively argues that the model of the Other does not work for antiquity. Instead of consistently negative stereotypes he finds complexity and nuance, negative stereotypes being balanced by positive images, a willingness to acknowledge foreign influence on one's own culture, and, particularly striking, widespread desire to claim kinship relationships."—Stanley M. Burstein, professor emeritus, California State University, Los Angeles

"Gruen offers a defense of many prominent cultures—including the Greeks, Romans, Egyptians, Jews, Gauls, and Carthaginians—against overextended charges of polarizing worldviews of each other. He looks at hundreds of examples and finds that the ancient sources' discussions of difference also recognize sameness, borrowing, relatedness, and indebtedness. The entire book is magnificently documented. The range of scholarship is very impressive."—Donald Lateiner, Ohio Wesleyan University