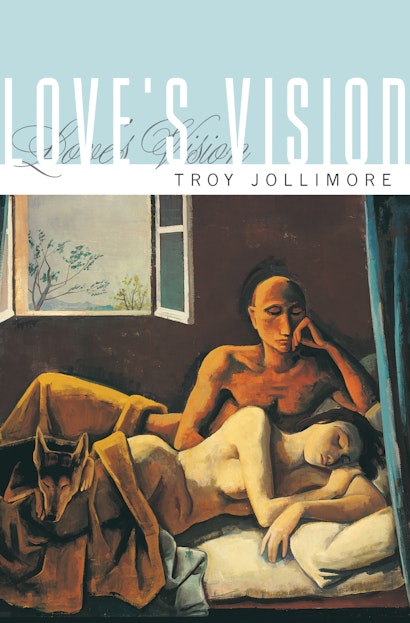 Love often seems uncontrollable and irrational, but we just as frequently appear to have reasons for loving the people we do. In Love’s Vision, Troy Jollimore offers a new way of understanding love that accommodates both of these facts, arguing that love is guided by reason even as it resists and sometimes eludes rationality. At the same time, he reconsiders love’s moral status, acknowledging its moral dangers while arguing that it is, at heart, a moral phenomenon — an emotion that demands empathy and calls us away from excessive self-concern. Love is revealed as neither wholly moral nor deeply immoral, neither purely rational nor profoundly irrational. Rather, as Diotima says in Plato’s Symposium, love is “something in between.”


Jollimore makes his case by proposing a “vision” view of love, according to which loving is a way of seeing that involves bestowing charitable attention on a loved one. This view recognizes the truth in the cliché “love is blind,” but holds that love’s blindness does not undermine the idea that love is guided by reason. Reasons play an important role in love even if they rest on facts that are not themselves rationally justifiable.


Filled with illuminating examples from literature, Love’s Vision is an original examination of a subject of vital philosophical and human concern.

Troy Jollimore is associate professor of philosophy at California State University, Chico. He is the author of Friendship and Agent-Relative Morality. He is also the author of two books of poems, At Lake Scugog (Princeton) and Tom Thomson in Purgatory, which won the National Book Critics Circle Award.

"In the elegantly written Love's Vision, Troy Jollimore offers a novel way to understand romantic love. His book draws upon a vast body of philosophical literature on the nature of love, but it is easily accessible for those without a background in philosophy. It is full of useful examples from literature, film and music, and is compelling and fun to read. . . . Jollimore offers us not only a new way of understanding love, but also practical insight into how to love and how to make it last."—Natasha McKeever, Journal of Applied Philosophy

"My enthusiasm for the text should . . . be clear. I like the content, I like the way it's put together. . . . [This is] a fine book which . . . deserves a readership well beyond the ranks of those with a special interest in analytic philosophy of love."—Tony Milligan, Metapsychology Online Reviews

"Troy Jollimore's Love's Vision is a compelling response to the debate regarding the rationality of love. Its easy style combines readability with thorough argumentation. Its most appealing and original feature is the challenge it poses to traditional conceptions of rationality, which tend to simply equate it with a disengaged, impartial stance."—Irene McMullin, Philosophical Quarterly

"Jollimore's voice is all his own: fluent in, but not limited by, the idiom of academic philosophy. Here he suggests that love is perception, of a special kind. By magnifying the traits of the person we love, by enveloping us in them, love shows us what is really there. One might say that his book does something similar, letting us see love as it is, in a distinctively insightful and absorbing way."—Niko Kolodny, University of California, Berkeley

"Love's Vision is a delight to read. Jollimore's sensitive, careful philosophical examination of the experience of loving, combined with insights from literature and social psychology, yields a compelling picture of love as a form of perception. Jollimore's view is original and offers a fresh and productive approach to some of the thorniest philosophical puzzles about love."—Simon Keller, Victoria University of Wellington

"This is a very important and interesting contribution to the philosophical literature on the nature of love. Jollimore has an engaging style and his book is a real pleasure to read."—Diane Jeske, University of Iowa