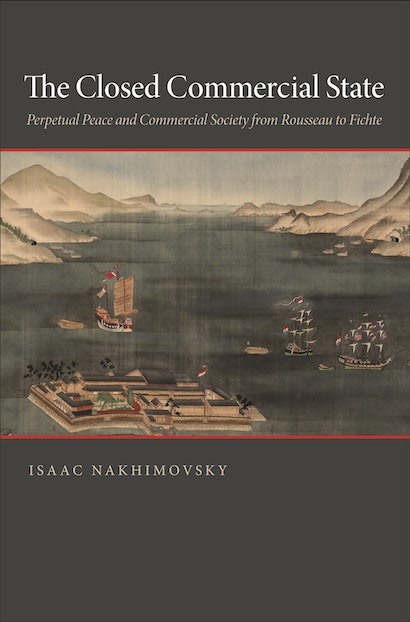 This book presents an important new account of Johann Gottlieb Fichte’s Closed Commercial State, a major early nineteenth-century development of Rousseau and Kant’s political thought. Isaac Nakhimovsky shows how Fichte reformulated Rousseau’s constitutional politics and radicalized the economic implications of Kant’s social contract theory with his defense of the right to work. Nakhimovsky argues that Fichte’s sequel to Rousseau and Kant’s writings on perpetual peace represents a pivotal moment in the intellectual history of the pacification of the West. Fichte claimed that Europe could not transform itself into a peaceful federation of constitutional republics unless economic life could be disentangled from the competitive dynamics of relations between states, and he asserted that this disentanglement required transitioning to a planned and largely self-sufficient national economy, made possible by a radical monetary policy. Fichte’s ideas have resurfaced with nearly every crisis of globalization from the Napoleonic wars to the present, and his book remains a uniquely systematic and complete discussion of what John Maynard Keynes later termed “national self-sufficiency.” Fichte’s provocative contribution to the social contract tradition reminds us, Nakhimovsky concludes, that the combination of a liberal theory of the state with an open economy and international system is a much more contingent and precarious outcome than many recent theorists have tended to assume.

Isaac Nakhimovsky is a junior research fellow at Emmanuel College, University of Cambridge.

"Nakhimovsky's book is rewarding to read. Not only does it give a rich, vivid description of the issues and contending forces at a time when the future of the European nation-state system hung in the balance; it also calls into question some pervasive assumptions about the rise of capitalism."—Michael Rosen, The Nation

"The [book] is a fascinating and always judicious account of a world of argument over whether and how European states could pursue economic vitality without destroying themselves and the rest of the world in the process. . . . Nakhimovsky's lucid and engaging book is an invaluable contribution to that project, as well as to the broader study of the history of political and international thought and the contemporary resonances of historical debates."—Jennifer Pitts, Perspectives on Politics

"As Nakhimovsky has brilliantly demonstrated, there is much for contemporary readers to be inspired by in Fichte's basic intuition that policies of public finance might be used not merely to regulate local economies and promote world peace but also to realize a robust and demanding conception of justice."—Frederick Neuhouser, Notre Dame Philosophical Reviews

"In this remarkable work, Isaac Nakhimovsky breaks completely with the traditional interpretation of Fichte as a figure of the Counter-Enlightenment concerned with propagating an extreme form of Romantic nationalism. Nakhimovsky focuses instead on Fichte's most elaborate work of political theory, his Closed Commercial State, and shows that it is one of the earliest and still most attractive principled socialist alternatives to liberal capitalist democracy."—Raymond Geuss, author of Philosophy and Real Politics

"Astonishingly, this is the first full study of the ideas of the major political theorist Johann Gottlieb Fichte. It transforms not simply our understanding of Fichte, but of the whole of nineteenth-century German thought—we will all have to read Hegel and Marx in a new way after this book."—Richard Tuck, Harvard University

"Isaac Nakhimovsky brilliantly reveals Fichte's attempt to enlist the welfare state and economic nationalism to resolve gaps in Kant's philosophy of international peace, democratic republicanism, and cosmopolitan commerce. One need not agree that Fichte succeeded in order to appreciate the excellent scholarship and deep contemplation that Nakhimovsky brings to these important issues."—Michael Doyle, Columbia University

"Superbly researched and elegantly written, this is a truly original study of a fascinating aspect of Enlightenment political thought and economy. Nakhimovsky brilliantly illuminates Fichte as a political philosopher and the broader currents of thought—including the writings of Rousseau, Kant, and Sièyes—that shaped him. This is essential reading for all those who care about the modern intellectual history of, and continuing theoretical debates over, international relations, globalization, republicanism, and distributive justice."—Sankar Muthu, University of Chicago

"This elegant book explores how Fichte came to conceive of the closed commercial state as necessary for international peace and domestic social justice. In a dramatic narrative, Nakhimovsky offers readers new intellectual resources for understanding economic self-sufficiency. This idea has been drowned out by the siren song of globalization in recent years, but Nakhimovsky shows it might resurface, motivated by the same reasons and ideals that moved Fichte."—Russell Muirhead, Dartmouth College

"Nakhimovsky has written a lucid and highly original account of how controversies from the European Enlightenment remain central to modern debates on globalization, the welfare of populations, and international peace."—Keith Tribe, University of Sussex

"Isaac Nakhimovsky's penetrating and remarkably stimulating book is by far the best attempt to capture the force of, and the motivation behind, Johann Gottlieb Fichte's critique and amendment of Kant's Perpetual Peace. Nakhimovsky shows why the two visions together provide a sharper definition of the political predicament we continue to face than shelves full of contemporary texts in international relations."—John Dunn, fellow of King's College, University of Cambridge

"This clear and carefully written book does an excellent job of explaining the importance and historical context of an interesting work by a major nineteenth-century philosopher. The author's knowledge of the primary text, Fichte's other texts, and the relevant secondary literature is impeccable. This book will greatly interest intellectual historians and historians of philosophy who specialize in nineteenth-century European thought."—Frederick Neuhouser, Barnard College, Columbia University

"Nakhimovsky has written an important book on the political economy of nineteenth-century Europe. The value of this lucid book is twofold: it introduces Fichte's work and his theory of political economy to an English-speaking readership, and it also provides an overview of the multidimensional debates on the state, national, and international economies and their relation to the betterment of humanity that determined the course of German idealism."—John K. Noyes, University of Toronto