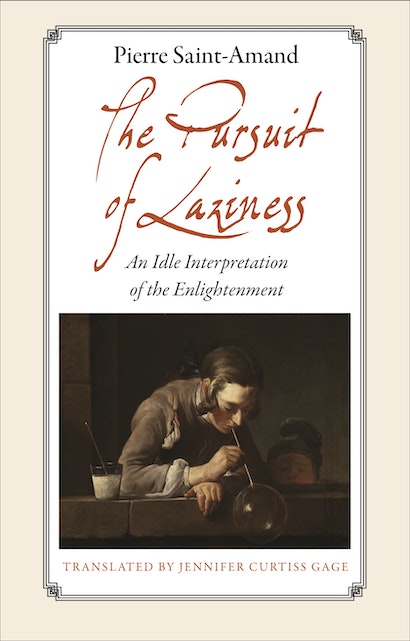 We think of the Enlightenment as an era dominated by ideas of progress, production, and industry — not an era that favored the lax and indolent individual. But was the Enlightenment only about the unceasing improvement of self and society? The Pursuit of Laziness examines moral, political, and economic treatises of the period, and reveals that crucial eighteenth-century texts did find value in idleness and nonproductivity. Fleshing out Enlightenment thinking in the works of Denis Diderot, Joseph Joubert, Pierre de Marivaux, Jean-Jacques Rousseau, and Jean-Siméon Chardin, this book explores idleness in all its guises, and illustrates that laziness existed, not as a vice of the wretched, but as an exemplar of modernity and a resistance to beliefs about virtue and utility.


Whether in the dawdlings of Marivaux’s journalist who delayed and procrastinated or in the subjects of Chardin’s paintings who delighted in suspended, playful time, Pierre Saint-Amand shows how eighteenth-century works provided a strong argument for laziness. Rousseau abandoned his previous defense of labor to pursue reverie and botanical walks, Diderot emphasized a parasitic strategy of resisting work in order to liberate time, and Joubert’s little-known posthumous Notebooks radically opposed the central philosophy of the Enlightenment in a quest to infinitely postpone work.


Unsettling the stubborn view of the eighteenth century as an age of frenetic industriousness and labor, The Pursuit of Laziness plumbs the texts and images of the time and uncovers deliberate yearnings for slowness and recreation.

Pierre Saint-Amand is the Francis Wayland Professor of French Studies and Comparative Literature at Brown University. His books include The Laws of Hostility: Politics, Violence, and the Enlightenment.

"For Saint-Amand, the heroes of his book are figures of resistance. In their non-productivity, they provide a glimpse of a new ethics of freedom that runs counter to the demands of the bourgeois capitalist order. . . . It is hard not to be seduced by his argument."—Jeremy Jennings, Times Higher Education Supplement

"I relished Pierre Saint-Amand's short, beguiling volume The Pursuit of Laziness for its astutely subversive take on Enlightenment workaholism. Saint-Amand concentrates on Enlightenment figures like the artist Chardin, who painted someone blowing a large bubble with a straw, or Joseph Joubert, who thought that lying in bed a lot was ideal for the writing life."—Robert Crawford, Sunday Herald

"Until now, extreme laziness has rarely featured as the cornerstone of a substantive rereading of the Enlightenment project as a whole. Saint-Amand focuses primarily on Diderot's and Rousseau's defense of the idle life as a kind of secular bliss. The author makes a strong case for distinguishing the utilitarian program of calculation and task efficiency from aesthetic reveries and world-open stance of philosophers. . . . Exceedingly well researched, [The Pursuit of Laziness] fills an important lacuna in understanding Enlightenment attitudes and literary practices and brings to light several overlooked sources that give pause to the predominant understanding of the Enlightenment ethos. Penned in French, this work is now available in an admirably clear and readable translation."—Choice

"Seductive and charming, this is a little gem of a book. I was won over by the author's fresh insights and playful, yet lucid, tone."—Darrin M. McMahon, Florida State University and author of Happiness: A History

"We have become accustomed to thinking of the Enlightenment as aligned with industry, labor, and disciplined bodies. But in this book, Saint-Amand deftly opens the door to a different—and indeed contrary—vision of philosophy and letters in the eighteenth-century: one that is fascinated by idleness, suspicious of the value of work for work's sake, and invested in indolence. In this unique and compelling account, familiar figures emerge into a new light, and lesser-known writers suddenly command our attention."—James Steintrager, University of California, Irvine