An essential history of the modern research university 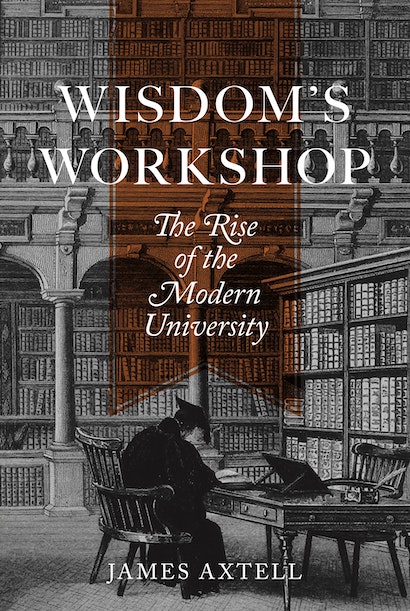 When universities began in the Middle Ages, Pope Gregory IX described them as “wisdom’s special workshop.” He could not have foreseen how far these institutions would travel and develop. Tracing the eight-hundred-year evolution of the elite research university from its roots in medieval Europe to its remarkable incarnation today, Wisdom’s Workshop places this durable institution in sweeping historical perspective. In particular, James Axtell focuses on the ways that the best American universities took on Continental influences, developing into the finest expressions of the modern university and enviable models for kindred institutions worldwide. Despite hand-wringing reports to the contrary, the venerable university continues to renew itself, becoming ever more indispensable to society in the United States and beyond.

Born in Europe, the university did not mature in America until the late nineteenth century. Once its heirs proliferated from coast to coast, their national role expanded greatly during World War II and the Cold War. Axtell links the legacies of European universities and Tudor-Stuart Oxbridge to nine colonial and hundreds of pre–Civil War colleges, and delves into how U.S. universities were shaped by Americans who studied in German universities and adapted their discoveries to domestic conditions and goals. The graduate school, the PhD, and the research imperative became and remain the hallmarks of the American university system and higher education institutions around the globe.

A rich exploration of the historical lineage of today’s research universities, Wisdom’s Workshop explains the reasons for their ascendancy in America and their continued international preeminence.

James Axtell is the Kenan Professor of Humanities Emeritus at the College of William and Mary. His many books include The Pleasures of Academe, The Educational Legacy of Woodrow Wilson, and The Making of Princeton University (Princeton). Axtell was elected to the American Academy of Arts and Sciences in 2004.

"In this time of anti-intellectualism—whether technocratic or populist—we don't need more smug disruptors. We need more hopeful builders. They will remind us of the democratic aspirations of pragmatic liberal education while recalling that the ambitions of our finest universities help fulfill the dreams of our best selves as a people."—Michael Roth, Wall Street Journal

"Authoritative, panoramic. . . . A thoroughly researched and vigorous history of an institution that has 'gained new vigor and proliferated progeny not only in the United States but around the globe.'"—Kirkus

"At a time in which colleges and universities have come under sustained attack . . . it may well be useful to explain to those outside the academy how American institutions became preeminent and why they continue to play an essential role at the center of modernity's infrastructure. In Wisdom's Workshop, Axtell does just that. Drawing on the vast literature on higher education, he provides an informative and engaging . . . account of the evolution of the research university, from its origins in England, Italy, and France in the Middle Ages to the emergence of the ‘multiversity' in the United States in the last half century."—Glenn Altschuler, Huffington Post

"This is an enjoyable and well-informed account of some of the most significant universities in the world."—David Willetts, Times Higher Education

"In his new book . . . Wisdom's Workshop: The Rise of the Modern University . . . [James] Axtell traces the U.S. university system all the way back to its Medieval roots. It turns out universities have changed quite a bit in the last eight centuries, both in form and function, adapting to their times. And some shifts are just as radical as the ones we face today."—Byrd Pinkerton, NPR

"No one seeking a newsy update of American higher education can ignore this book. . . . Wisdom's Workshop is readable and worthy."—Edwin Yoder, Weekly Standard

"James Axtell, one of the field's most authoritative historians, provides this handsome addition to the growing literature on the U.S. university. . . . This book deserves to be read by specialists and generalists alike."—Choice

"James Axtell adds to his prodigious scholarly output with yet another outstanding publication. A pleasurable and informative guide to whatever he chooses to discuss, his latest work is true to form and is justly praised by those well-acquainted with his subject and its sources."—Sheldon Rothblatt, History of Universities

"In Wisdom's Workshop, James Axtell takes us on a fascinating journey from the Oxford and Cambridge colleges through the German universities to the early development of American colleges to the preeminent research universities of today. This is a wonderful history: beautifully written and compelling. If you think current colleges and universities face challenges, wait until Axtell tells you about their predecessors."—Jonathan R. Cole, author of The Great American University

"With both a bird's-eye view and ground-level perspective, Wisdom's Workshop offers a broad look at the university. This book surveys eight hundred years of university evolution, from medieval Paris to elite American research universities, while also providing telling vignettes of life within these institutions. With masterful scholarship and delightful prose, James Axtell recounts a history, little known beyond specialists, of an establishment central to contemporary culture."—Roger L. Geiger, author of The History of American Higher Education

"James Axtell begins Wisdom's Workshop by noting that some books beg to be written. Yes, indeed, and we readers should be grateful that Axtell answered the call. We have needed an updated history of the American research university and this work fills the void superbly. Following the institution's development from the Middle Ages to the present, Axtell's narrative is lucid, insightful, concise, and comprehensive. This will be the go-to book for people seeking to understand elite universities."—Julie Reuben, Harvard Graduate School of Education

"Axtell's book stands alone as the only work that traces the historical genealogy of America's elite research universities. The scholarship is deep and solid, and Axtell's distinctive voice comes through. His important, learned, and entertaining book is not simply a clear and coherent history but also a love letter to universities and the life of the teacher-scholar."—James Turner, University of Notre Dame