What Kansas really tells us about red state America 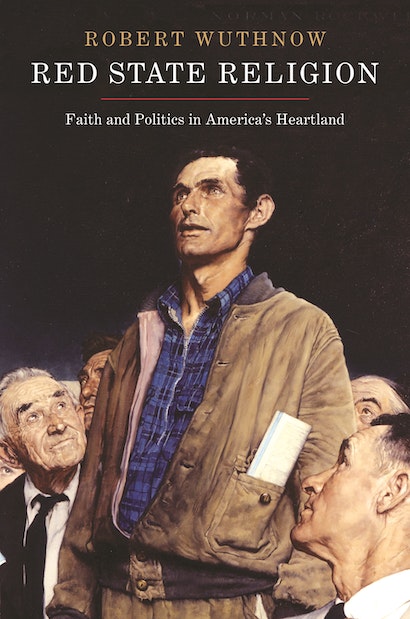 No state has voted Republican more consistently or widely or for longer than Kansas. To understand red state politics, Kansas is the place. It is also the place to understand red state religion. The Kansas Board of Education has repeatedly challenged the teaching of evolution, Kansas voters overwhelmingly passed a constitutional ban on gay marriage, the state is a hotbed of antiabortion protest—and churches have been involved in all of these efforts. Yet in 1867 suffragist Lucy Stone could plausibly proclaim that, in the cause of universal suffrage, “Kansas leads the world!” How did Kansas go from being a progressive state to one of the most conservative?

In Red State Religion, Robert Wuthnow tells the story of religiously motivated political activism in Kansas from territorial days to the present. He examines how faith mixed with politics as both ordinary Kansans and leaders such as John Brown, Carrie Nation, William Allen White, and Dwight Eisenhower struggled over the pivotal issues of their times, from slavery and Prohibition to populism and anti-communism. Beyond providing surprising new explanations of why Kansas became a conservative stronghold, the book sheds new light on the role of religion in red states across the Midwest and the United States. Contrary to recent influential accounts, Wuthnow argues that Kansas conservatism is largely pragmatic, not ideological, and that religion in the state has less to do with politics and contentious moral activism than with relationships between neighbors, friends, and fellow churchgoers.

This is an important book for anyone who wants to understand the role of religion in American political conservatism.

Robert Wuthnow, a native of Kansas, teaches sociology and directs the Center for the Study of Religion at Princeton University. He is the author of many books about American religion and culture, including Remaking the Heartland: Middle America since the 1950s and Small-Town America: Finding Community, Shaping the Future (both Princeton).

"Robert Wuthnow, a brilliant sociologist of religion and himself a native of Kansas, gives us a careful sociological history of the intertwining of religion and politics in this quintessential red state. . . . In Wuthnow's nuanced and careful study, Kansans come across less as hayseeds or off-the-wall moralizers than as pragmatic conservatives, committed to traditional families and fiscal conservatism. They are skeptical of big government and dedicated to preserving simple and vital virtues. Wuthnow has penned a 'must read' book for those who would understand—and not just caricature—red state religion and how it intertwines with politics."—John A. Coleman, America

"With the publication of Red State Religion, we profit greatly from a majestically comprehensive account of Kansas' history. In turn, we get a truer story, one that inspires a less ideological reading of the state, perhaps freeing Kansans themselves from any notion of how they must think—or vote."—Alexander Heffner, Philadelphia Inquirer

"Red State Religion is a model of clarity and is surely one of the best books available on the intersection of religion and politics."—Al Menendez, Voice of Reason

"Elegantly written, passionately argued, and deeply researched, Red State Religion challenges our basic assumptions about the influence of the Religious Right in particular, and the role of religion in American politics more generally."—Andrew Preston, Journal of Ecclesiastical History

"Wuthnow does an excellent job tracing the development of religious institutions in the state."—James E. Sherow, Great Plains Research

"Red State Religion is an ambitious, comprehensive, and rigorous study that provides a thoughtful corrective to past efforts to portray what's the matter with Kansas."—Finbarr Curtis, Religion

"Robert Wuthnow's study of religion and public life in Kansas—from controversies over the Kansas-Nebraska Act in the 1850s to strife over abortion, evolution, and gay rights in the 2000s—is thoughtful, fact-filled, empathetic, often moving, and always informative. When he addresses the hackneyed question, 'what's the matter with Kansas?' his answer eschews simplistic blue state-red state stereotyping in favor of patient attention to moderate Methodists and Catholics and a historically flexible Republican Party, along with careful explanation of when and how that moderation began to give way. This is sparkling history."—Mark A. Noll, author of God and Race in American Politics: A Short History

"Scrutinizing Kansas's red state religion, Wuthnow discovers a complex, compassionate, and balanced approach to social goods and moral choices. Upending stereotypes about his home state's embrace of the Religious Right, he reveals that the beating heart of the heartland is devotion to church and community."—Diane Winston, USC Annenberg School for Communication

"This is a fascinating portrait of the interplay between religion and politics in the Midwest over the past 150 years. It also provides a necessary corrective to accounts that have long portrayed Kansas as a monolithic cultural backwater populated by dupes who cannot grasp their own interests. As a native son, Robert Wuthnow has an understanding of Kansas that runs deep; as a leading scholar, he provides an analysis with broad implications. This is an illuminating and impressive book."—Brian Steensland, Indiana University

"Red State Religion is an impressive work. In contrast to the simple headline-grabbing arguments that something is the matter with Kansas, Robert Wuthnow starts from the beginning to understand the current confluence of religion and politics in his home state. Drawing on an enormous range of sources and data, he uses his nearly unrivaled ability to explore important debates and to set them in the context of compelling stories of the lives of ordinary people."—Paul A. Djupe, Denison University