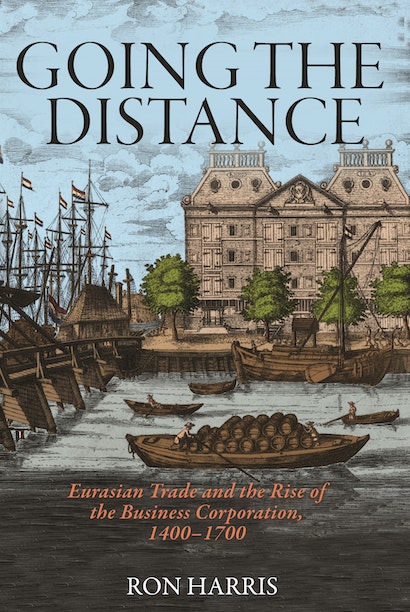 Before the seventeenth century, trade across Eurasia was mostly conducted in short segments along the Silk Route and Indian Ocean. Business was organized in family firms, merchant networks, and state-owned enterprises, and dominated by Chinese, Indian, and Arabic traders. However, around 1600 the first two joint-stock corporations, the English and Dutch East India Companies, were established. Going the Distance tells the story of overland and maritime trade without Europeans, of European Cape Route trade without corporations, and of how new, large-scale, and impersonal organizations arose in Europe to control long-distance trade for more than three centuries.

Ron Harris shows that by 1700, the scene and methods for global trade had dramatically changed: Dutch and English merchants shepherded goods directly from China and India to northwestern Europe. To understand this transformation, Harris compares the organizational forms used in four major regions: China, India, the Middle East, and Western Europe. The English and Dutch were the last to leap into Eurasian trade, and they innovated in order to compete. They raised capital from passive investors through impersonal stock markets and their joint-stock corporations deployed more capital, ships, and agents to deliver goods from their origins to consumers.

Going the Distance explores the history behind a cornerstone of the modern economy, and how this organizational revolution contributed to the formation of global trade and the creation of the business corporation as a key factor in Europe’s economic rise.

Ron Harris is professor of legal history and former dean of law at Tel Aviv University. He is the author of Industrializing English Law.

"Various parts of his [Harris’] oeuvre can be fruitfully utilized to build a new approach, integrating the humanities with social and economic studies."—Carlo Taviani, Journal of Early Modern History

"Going the distance brings a novel view of institutions, as it opens the black box and studies the functioning of organizational forms of business using insights from legal studies and economy. . . . This book is an essential read for anyone interested in long-distance trade and its organization, as well as for economic and legal historians focusing on institutional analysis. . . . It brings new insights into methodological approaches for the study of the migration and transplantation of institutions."—Karolina Hutková, Economic History Review

"A truly remarkable work of profound scholarship, destined to become a classic. Each micro-study is carefully crafted, mastering well both the specific elements pertaining to it and the way they relate to the bigger picture. . . . A genuine pleasure to read."—Guido Rossi, Edinburgh Law Review

"A major academic achievement—certainly one of the most significant contributions to the history of business organizations published over the past decade. It manages to be both highly useful and profoundly challenging to other scholars at the same time. It will likely serve as one of the field’s cornerstones for many years to come. The phrase “this is a must-read book” is abused all too often in academic book reviews, but in all seriousness and sincerity, this is a must-read book for anyone with even a passing intellectual interest in the business corporation."—Taisu Zhang, Journal of Economic History

"Harris’s deeply researched book shows that prior to the seventeenth century, societies had roughly the same framework of person-to-person contracts for organizing firms. Europeans, however, introduced the corporation, a firm that did not arise elsewhere or diffuse organically. Armed with this innovative structure, Europe came to dominate international trade. Going the Distance is a must-read for all those interested in the history and social science of the business enterprise.”—Jean-Laurent Rosenthal, coauthor of Dark Matter Credit

"Going the Distance focuses on the complex and contingent conditions that disadvantaged older business forms and gave rise to the joint stock company. Harris opens a space for debate about the role of law, culture, and politics in the emergence of the modern corporation, while proposing a new explanation for English and Dutch dominance of the Eurasian market."—Madeleine Zelin, Columbia University

"Among the most significant of the many virtues of Going the Distance is its uniquely comprehensive and detailed analysis of the organizational forms employed for commerce in Middle Eastern and Asian societies, on the eve of the Great Divergence between Eastern and Western economic institutions and activity."—Henry Hansmann, Yale Law School

"Between 1400 and 1700, long-haul shipping came to dominate the highways of world trade, producing a revolution in business organization. This pathbreaking work explores the connection between trade and institutional change and shows why organizational innovation mattered to Europe’s economic emergence."—Tirthankar Roy, London School of Economics

"Ambitious and skillfully executed, Going the Distance considers why Europeans colonized the rest of the world and not the other way around. Arguing that there was an underappreciated organizational revolution in England and the Dutch Republic during the seventeenth century, Harris looks at why the product of this revolution, the business corporation, was not adopted immediately by traders elsewhere. This is a fascinating book full of innovative ideas."—Giuseppe Dari-Mattiacci, Columbia Law School