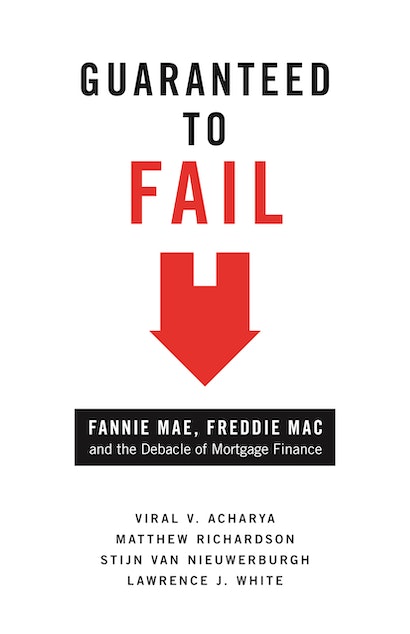 The financial collapse of Fannie Mae and Freddie Mac in 2008 led to one of the most sweeping government interventions in private financial markets in history. The bailout has already cost American taxpayers close to $150 billion, and substantially more will be needed. The U.S. economy — and by extension, the global financial system — has a lot riding on Fannie and Freddie. They cannot fail, yet that is precisely what these mortgage giants are guaranteed to do. How can we limit the damage to our economy, and avoid making the same mistakes in the future?

Guaranteed to Fail explains how poorly designed government guarantees for Fannie Mae and Freddie Mac led to the debacle of mortgage finance in the United States, weighs different reform proposals, and provides sensible, practical recommendations. Despite repeated calls for tougher action, Washington has expanded the scope of its guarantees to Fannie and Freddie, fueling more and more housing and mortgages all across the economy — and putting all of us at risk. This book unravels the dizzyingly immense, highly interconnected businesses of Fannie and Freddie. It proposes a unique model of reform that emphasizes public-private partnership, one that can serve as a blueprint for better organizing and managing government-sponsored enterprises like Fannie Mae and Freddie Mac. In doing so, Guaranteed to Fail strikes a cautionary note about excessive government intervention in markets.

Viral V. Acharya, Matthew Richardson, Stijn Van Nieuwerburgh, and Lawrence J. White are professors at the Leonard N. Stern School of Business at New York University, and are experts in applied financial economics. Acharya and Richardson are the coeditors of Restoring Financial Stability and Regulating Wall Street. Van Nieuwerburgh is an expert on household finance and mortgage markets. White has studied government-sponsored enterprises for many years and served on the board of Freddie Mac from 1986 to 1989 as part of his government service as a board member on the Federal Home Loan Bank Board.

"[Guaranteed to Fail] is more multi-dimensional and nuanced than most other books on the bloody crossroads where real estate and banking meet. . . . [The] authors show convincingly that the GSEs' subprime lending was not a noble idea that eventually went wrong or drifted into excesses—it was a fool's errand from the beginning."—Financial Times

"[A] valuable book on how two quasi-public companies became 'the world's largest and most leveraged hedge fund'. . . . A balanced study, [Guaranteed to Fail] rises above a clash between partisans on the right—who call the companies 'ground zero' in the meltdown—and those on the left who blame deregulation and Wall Street excess. . . . Part primer, part policy prescription, the text explains in simple language what these entities are, how they got so big, and why we must fix them."—James Pressley, Bloomberg News

"In Guaranteed to Fail, a quartet of New York University professors from its Stern School of Business, focus on the 'debacle of mortgage finance' that Fannie and Freddie helped create, and offer a plan for reform. In clear language, and with plenty of data to support their arguments, the authors provide a concise but comprehensive history of the GSEs—which alone makes their book worth reading."—Barron's

"Guaranteed to Fail: Fannie Mae, Freddie Mac, and the Debacle of Mortgage Finance, stands out among all the others. . . . [I]t is one of the very few books to focus squarely on the ultimate cause of the crisis: US government housing policy and the role of the two government-backed mortgage giants Freddie Mac and Fannie Mae in giving effect to that policy."—Stephen Kirchner, The Conversation

"No one can accuse the authors of failing to offer solutions to the problems they so thoroughly document. . . . One can only hope that some trace of the constructive approach of Guaranteed to Fail will inform the ongoing debate in Washington on the vitally important question of the future structure of the U.S. mortgage market."—Martin S. Fridson, Financial Analyst Journal

"This book should, without question, play an important role in the policy discussion of how to reform the mortgage market. Its accessible explanation of the GSEs' growth and behavior, and its detail and care in suggesting the direction for housing finance to go—and how to get it there—are its strengths. In terms of audience, the book seems more oriented toward policy discussions than academic ones. . . . As a whole, it provides a useful overview of the rise and fall of the GSEs, and is a worthwhile read for those interested in understanding the recent crisis."—Daniel K. Fetter, Journal of Economic Literature

"They combine in an ideal way research and political consulting, resulting in an easy-to-read book that nevertheless has the necessary in-depth analysis. The book is rich with quotes from the past suggesting that everybody should have seen the imminent disaster."—Rico von Wyss, Financial Markets and Portfolio Management

"Guaranteed to Fail is one of the more comprehensive and informative books on the financial crisis. In addition to its relevance to the policy debate on homeownership and government guarantees, the book has numerous pedagogical strengths. Each chapter is well-organized, contains numerous charts and graphs, and has incredible detail regarding legislation, announcements, and media reports that impacted the housing market since the 1930s. The appendix, with a timeline of US housing finance milestones and a 32-page blueprint for reform, highlight the great effort that went into the creation of this work."—Cynthia Bansak and Peter Carpenter, Eastern Economic Journal

"The [authors] combine in an ideal way research and political consulting, resulting in an easy-to-read book that nevertheless has the necessary in-depth analysis. The book is rich with quotes from the past suggesting that everybody should have seen the imminent disaster."—Rico von Wyss, Swiss Society for Financial Market Research

"Guaranteed to Fail is a down-to-earth analysis of why Fannie Mae and Freddie Mac collapsed and why housing finance is broken. The authors provide clear solutions to fixing this complex problem. This is a timely and important book."—Nouriel Roubini, coauthor of Crisis Economics: A Crash Course in the Future of Finance

"Guaranteed to Fail is a comprehensive and well-written study of the role played by Fannie and Freddie in the events leading up to the financial crisis. It also suggests the way forward. This book is timely as well as insightful, and will be an influential contribution to the debate on the role of government-sponsored enterprises."—Raghuram G. Rajan, author of Fault Lines: How Hidden Fractures Still Threaten the World Economy

"This is an excellent book. Guaranteed to Fail presents a cogent proposal for the resolution of the current conservatorship of Fannie Mae and Freddie Mac. It documents the historical, economic, political, and financial issues that led to the current crisis, and presents all the issues in a fair and informative manner."—Dwight Jaffee, University of California, Berkeley