An argument against treating our bodies as commodities 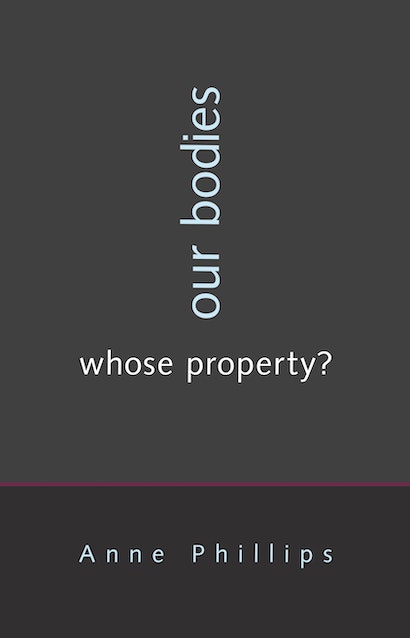 No one wants to be treated like an object, regarded as an item of property, or put up for sale. Yet many people frame personal autonomy in terms of self-ownership, representing themselves as property owners with the right to do as they wish with their bodies. Others do not use the language of property, but are similarly insistent on the rights of free individuals to decide for themselves whether to engage in commercial transactions for sex, reproduction, or organ sales. Drawing on analyses of rape, surrogacy, and markets in human organs, Our Bodies, Whose Property? challenges notions of freedom based on ownership of our bodies and argues against the normalization of markets in bodily services and parts. Anne Phillips explores the risks associated with metaphors of property and the reasons why the commodification of the body remains problematic.

What, she asks, is wrong with thinking of oneself as the owner of one’s body? What is wrong with making our bodies available for rent or sale? What, if anything, is the difference between markets in sex, reproduction, or human body parts, and the other markets we commonly applaud? Phillips contends that body markets occupy the outer edges of a continuum that is, in some way, a feature of all labor markets. But she also emphasizes that we all have bodies, and considers the implications of this otherwise banal fact for equality. Bodies remind us of shared vulnerability, alerting us to the common experience of living as embodied beings in the same world.

Examining the complex issue of body exceptionalism, Our Bodies, Whose Property? demonstrates that treating the body as property makes human equality harder to comprehend.

Anne Phillips is the Graham Wallas Professor of Political Science at the London School of Economics and Political Science. Her many books include The Politics of Presence and Multiculturalism without Culture (Princeton).

"[B]oth those who are aware of what is happening around these issues and those who have not reflected on recent developments around markets, bodies and properties would do well to read Phillips' timely, intelligent overview of the challenges of early 21st-century global body politics. . . . [A] rich feast of considered reflections on some of the most pressing issues of our times."—Maureen McNeil, Times Higher Education

"Ultimately, although she may not have intended it to be overtly so, Phillips' book reads as a beautiful piece of Marxist work, and it is in this way specifically that her work is incredibly valuable in the face of the increasing commodification and marketization of practically every aspect of our existence. . . . Her book is . . . valuable not just from a feminist perspective concerned with women's equality in the face of corporeal exploitation, but to those interested in issues of political, economic, and social justice as well."—Linda Roland Danil, Marx & Philosophy Review of Books

"Phillips examines the public policy ramifications of using property rights language about the body and its parts. . . . This is a valuable and balanced survey of the various positions on issues that evolving social views and medical technology are making important, if not vital."—Choice

"There is much to admire in this book. . . . The way in which she presses relevant empirical evidence into the service of her normative commitments is impressive. Her thoughtful discussion of the infinitely complex and emotionally laden ways in which we relate to our bodies, and of the impact which our decisions regarding our bodies have on others, challenges both those who subscribe to the view that the individual alone should decide what to do with their body, and how to do it, and those who favor the side of controlling bodies—particularly, it has to be said, women's bodies—for society's ends."—Cecile Fabre, Times Literary Supplement

"This is a skilful and thoughtful engagement with a 'real' ethical/policy issue and from which the author is not too shy to draw 'real' policy conclusions."—Chris Pierson, Political Theory

"The topic of this clear and accessible book is timely and important, and the implications of talking about and treating the body as property affect a broad range of policy concerns. A major contribution to debates in both philosophy and public policy, this book should be read by philosophers, political theorists, feminist theorists, bioethicists, and general readers for its theoretical and practical guidance to some of today's thorniest issues."—Mary L. Shanley, Vassar College