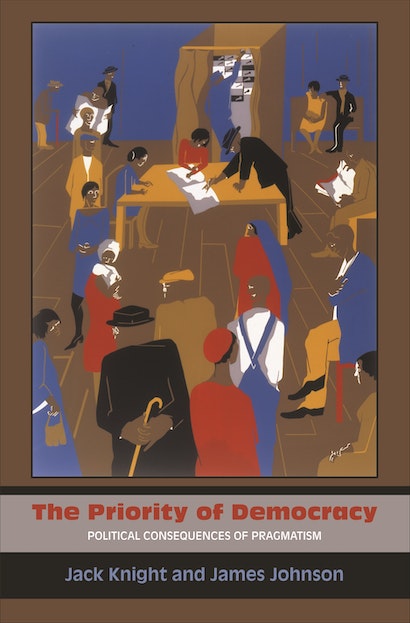 Pragmatism and its consequences are central issues in American politics today, yet scholars rarely examine in detail the relationship between pragmatism and politics. In The Priority of Democracy, Jack Knight and James Johnson systematically explore the subject and make a strong case for adopting a pragmatist approach to democratic politics—and for giving priority to democracy in the process of selecting and reforming political institutions.

What is the primary value of democracy? When should we make decisions democratically and when should we rely on markets? And when should we accept the decisions of unelected officials, such as judges or bureaucrats? Knight and Johnson explore how a commitment to pragmatism should affect our answers to such important questions. They conclude that democracy is a good way of determining how these kinds of decisions should be made—even if what the democratic process determines is that not all decisions should be made democratically. So, for example, the democratically elected U.S. Congress may legitimately remove monetary policy from democratic decision-making by putting it under the control of the Federal Reserve.

Knight and Johnson argue that pragmatism offers an original and compelling justification of democracy in terms of the unique contributions democratic institutions can make to processes of institutional choice. This focus highlights the important role that democracy plays, not in achieving consensus or commonality, but rather in addressing conflicts. Indeed, Knight and Johnson suggest that democratic politics is perhaps best seen less as a way of reaching consensus or agreement than as a way of structuring the terms of persistent disagreement.

"Overall, this study is a deeply considered, well argued contribution to contemporary debates about the relationship between democratic processes and context in normative political theory."—Hussein Banai, Political Studies Review

"The Priority of Democracy is the result of a long and productive partnership between two serious and seriously smart scholars. Much in the book will be familiar to readers who have been following the article trail of these two over the last 20 years. But nothing to my knowledge puts it all together into a full theory of democracy like this book. Unlike so many books these days, it is not a collection of their greatest hits marketed as a coherent whole. It is a real book that benefits from being read from beginning to end."—Simone Chambers, Perspectives on Politics

"[T]he book is a significant contribution to the academic literature on democratic politics and institutional design, one that will hopefully inspire critical response and perhaps some experimentation with democratic institutions."—Shane J. Ralston, Philosophy in Review

"Knight and Johnson have written an essential volume for scholars, public officials, and citizens living in the contemporary era. They stress that democracy does not just work by itself. No single design enables every democracy to generate fair and effective outcomes given the vast diversity of circumstances around the world. Knight and Johnson examine factors that increase the likelihood that democratic systems can be effective."—Elinor Ostrom, winner of the 2009 Nobel Prize in Economics

"Knight and Johnson have provided us with an excellent extension of Dewey's idea that democracy and experimentalism walk hand in hand. They put forward a pragmatist or epistemic justification of democracy, arguing that democratic decision making delivers the best answers, and they show us what legal, economic, and political institutions are conducive to getting those good answers. Anyone interested in deliberative democracy will do well to read this book."—Cheryl Misak, University of Toronto

"This is a very important book that has the potential to become a classic. Highly ambitious, it provides a compelling, realistic, and genuinely original way of thinking about democracy. Even if democracy cannot transform interests or produce harmony, Knight and Johnson argue, it has crucial pragmatic benefits that cannot be reproduced by any other forms of social organization, whether markets, courts, or bureaucracies."—Henry Farrell, George Washington University

"This is a major book. It represents a significant advance in democratic theory, contributing to both political economy and political theory approaches to democracy. It addresses fundamental questions of institutional choice and the justification and possibilities of the institutions we establish. In the process it also illuminates when decentralized decision-making is possible and normatively appropriate. Furthermore, it resuscitates John Dewey as a key analyst of democracy, making pragmatism relevant again for contemporary democratic theory."—Margaret Levi, University of Washington and University of Sydney